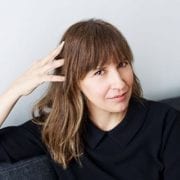 Lisa Gabriele is the author of Tempting Faith DiNapoli and The Almost Archer Sisters, and The Winters, and is an award-winning TV producer, writer and director. Her writing has appeared in Vice, Nerve, New York Magazine, Washington Post, New York Times Magazine, Globe and Mail, National Post, Elle and Glamour. Her essays have appeared in several anthologies, including The Best American Non-Required Reading. She’s also the author of the international best-selling S.E.C.R.E.T. trilogy, under the pseudonym L. Marie Adeline, a series that’s been published in more than 30 countries.

Lisa Gabriele, the author of one of fall’s most anticipated books, The Winters, shared with She…