I grew up watching Stephen King movies. One of my very favorites was Pet Sematary. I would watch it on repeat as a toddler, and it was the first King book I ever remember reading. More recently, I came to the realization that there are so many King books I’ve yet to read and I’ve made it a goal of mine to start collecting and reading all of King’s fiction works. I haven’t read even half of King’s books but I’m gradually working my way through them! For now, here are the top 10 Stephen King books.

(I want to preclude this article by sharing that most King novels are full of triggers. There is a lot of violence, gore, harm/death to children and/or animals, sexual assault, etc. King books should be read at the reader’s own personal assessment. I will briefly touch on some of those topics within the snippets below.)

When the Creeds move to rural Maine for Louis to work at the university’s health center, things quickly turn bad. A student is killed on campus just after Louis starts, and the Creeds’ dream home has a few small downfalls – it sits on a busy highway where semi trucks fly by a little too quickly and there’s an odd pet burial ground at the back of the property. Their kind old neighbor, Jud, warns them to keep an eye on the kids and their pet cat Churchill near the road and to not wander past the Pet Sematary. Desperate to keep his daughter calm after Churchill is hit by a speeding truck, Louis goes to extreme lengths to bring Churchill back. But something’s not quite right with the family’s beloved pet… and he may not be the only thing buried in the Pet Sematary. King describes this book as his most terrifying story, possibly because it hits so close to home, and was influenced by an almost real-life event. It’s insanely creepy, especially if you’re a parent to a cat or a kid.

When a horrific construction site accident claims Edgar’s arm, his life quickly spirals out of control. He and his wife divorce and he becomes estranged from his children. All he’s left with is a not-so-quiet rage. So he picks up his life in Minnesota and moves to the Florida Keys. There, he meets a unique fella down the beach named Wireman, and they become fast friends. It’s also where he discovers his love, and talent, for art. He begins painting the wildest, most beautiful creations. But he starts to lose himself in his paintings, which may or may not predict events elsewhere. Duma Key is possibly one of the most underrated books of King. It’s beautiful and poetic, and the horror is very much a slow burn of terror. But more than anything, the characters are electric and enthralling.

The Shining by Stephen King

After losing his job to alcoholism, Jack Torrance takes on a seasonal role as caretaker of the infamous Overlook Hotel. Alongside Jack are his wife and young son, Danny. They’re set to live in the Overlook during the winter when it’s near impossible to leave or get to the mountaintop resort. It’s a perfect opportunity for a fresh start, family time and novel writing. But the stay quickly becomes sinister as the hotel seems to have a life of its own, and starts to bring out the worst in Jack. Pretty much everyone has seen Stanley Kubrick’s classic take on The Shining, of which King himself didn’t particularly love. While the classic horror film is mesmerizing and phenomenal in its own right, King’s original novel is a bit more delicately haunting than its cinematic counterpart. The novel has more of a creeping feeling which stays with you for days after the last page.

Jake is a high school English teacher with a side gig as a night school educator – his life is just fine and not too extraordinary. That is until his pal Al, who owns the local diner, confides there’s a time portal to 1958. Al’s dying and needs someone who can continue the job he’s been pursuing for many years – stopping the assassination of JFK. Little does Jake know when he steps out of a supply closet into the late ’50s, but his life is just getting started. 11/22/63 certainly has some horrific aspects to it, but ultimately it’s a historical fiction time travel novel and can suit a wide variety of readers. Many folks I’ve chatted with that aren’t typically fans of King still really enjoy this book. I watched the Hulu original before ever picking up the book, and that’s really the only order I would recommend if you plan to do both. If you watch the show after reading the novel, it won’t compare. Much like Duma Key, the characters in this book truly stuck with me. You’ll also run into some other well-known King characters (only briefly) and some infamous and beloved real-life historical figures in 11/22/63. As I read this book, I was completely immersed in the story, and it’s absolutely one I would read again.

It by Stephen King

Every 27 years, a horrible haunting comes to Derry, Maine. Children go missing. People die. But between those 27 years, Derry is just your good old small-town America. It is a story of a group of friends (self-named The Losers Club) who band together to fight the monster known as It, first as preteens and again as adults 27 years later. The narration switches between the 1950s and the 1980s as the story is hashed out within both timelines. This is literally one of the most terrifying stories I’ve ever read. It can portray your worst nightmares, your biggest fears and it feeds upon that terror. The storytelling and descriptions within It’s pages are unlike anything else I’ve ever read. Which makes it problematic at times. There’s a big issue I have with the book that I won’t spoil, but it’s… uncomfortable. Outside of that one scene, this book is damn near perfect.

Carrie White is not your average American teenager. In fact, she’s quite the opposite – she’s quiet, awkward and unpopular, sheltered by her overly religious mother and she has telekinetic powers. When the popular kids play a cruel prank on poor Carrie, she lashes out in a rampage that could only be caused by the works of the supernatural. And no one will ever prank Carrie again. Carrie is King’s debut novel and comes in at just around 200 pages. It’s a perfect read for someone who is wanting the horror and supernatural King can bring but isn’t ready for a 500+ page doorstopper. It’s told through news articles and townspeople accounts of the story, and reminds me very much of a reenactment-type show, but not so corny. This one is really a great book for King beginners.

When novelist Ben Mears returns to his hometown of Jerusalem’s Lot to gather inspiration for his latest novel, he gets quite the shock when weird things start happening. Children go missing, dogs are found dead around town. It’s obvious there’s an evil haunting the small town, and Mears gathers an odd group of folks to rid the town of terror. King writes a lot of supernatural horror, but somehow I was surprised to find he had written a vampire story. I loved Salem’s Lot because it’s a new twist on a classic tale. King can always take something very common and turn it into something a million times scarier, and that’s exactly what he did with this story.

Cujo is a good boy. He may be a 200-pound Saint Bernard, but he is the friendliest most loving pup there is. Well, he’s a good boy until a bat bite to his nose gives him a terrible case of rabies, and Cujo goes on a rampage of destruction. Cujo is actually another case of taking the common and turning it into horror. In fact, animals getting rabies is something that could happen just about anywhere to anyone’s best pal (very sadly). So this story could hit quite close to home for many. It’s a rare King novel that’s not very supernatural, making it scary in a totally different way than most of his novels. Throughout the entire book, I was shocked but the ending literally left me with my mouth hanging wide open.

In this sequel to The Shining, Danny Torrance is revisited as a middle-aged alcoholic trying to put his life back together. After starting the 12-step program, he becomes an upstanding citizen in a small town where he works in hospice care. He still carries a bit of the shine, and with it connects to a girl with possibly the strongest shine of all time. The bad news is a group of supernaturals are after her, and Danny may be the only one who can help her. King has a couple of series, but typically doesn’t stray from the standalone novel, so I wasn’t sure what to expect from Doctor Sleep. I’m here to tell you, it’s worth the read. It was so gratifying to get to reconnect with Danny Torrance as an adult. This was a wonderful follow-up to an amazing story that left me feeling a little more whole and satisfied than the original novel.

The Outsider by Stephen King

When a young boy is found murdered and sodomized in the woods by a local park, local Little League coach Terry Maitland is very publicly arrested for the crime. There’s tons of evidence putting him at the scene. Yet there’s also evidence showing he was a hundred miles away on the day in question. Something odd is happening in Flint City, but one thing is for sure: no one can be in two places at once. The Outsider was really difficult to read because of the horrific subject matter. But this book is so different from other King books I’ve read. It’s actually more of a crime thriller/police procedural with some supernatural/horror elements sprinkled in.

Bonus: The Body by Stephen King

As an extra, I absolutely had to share King’s novella The Body as an 11th favorite book. Originally published in the short story collection Different Seasons, it has since been published as a standalone. You may know it from the film adaptation, Stand By Me. Unlike other King books, The Body is less horror (no supernatural) and more of a coming-of-age story. It’s told over the length of a weekend and focuses on a group of middle schoolers who take an adventure to find a dead body. Over the course of the story, each of the boys (all of whom come from abusive or dysfunctional homes) is forced to confront life and death. This is a book I would recommend to everyone. It’s not typical of King, but it proves he is a master storyteller. The entire book is hauntingly beautiful. I’d actually consider it more historical fiction than horror. 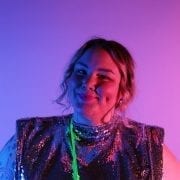 Kayla Whitter is a 20-something INFJ and Hufflepuff. Lover of coffee, burritos, and Chick-fila, she enjoys reading, binge-streaming tv, and traveling. She lives in Georgia with her husband and their furbaby, Courage. A Paper Arrow is her blog.

9 New books to binge this February

What she reads: Find Me by André Aciman

The 10 best books for fans of Outlander

What she reads if she’s graduating

9 Queer books everyone should read

What she reads during quarantine