If you’re anything like me, there is nothing better during the cold winter season than to cozy up with a chilling book to fit the mood – something about the atmosphere and a thick blanket of snow really solidifies a creepy read for me. Now that we’re in the midst of the best season to crack open a thriller, here are 12 must-read thrillers of winter that I have read (or am anticipating reading). These are the kinds of books that have me double checking the locks on my doors before climbing under my favorite throw blanket at night.

The Lost Man by Jane Harper

Two brothers meet on their family homestead after discovering the mysterious death of their third brother… with an intro like that, you know the book is going to be a gem. I have been such a fan of Jane Harper since The Dry and was really anticipating her third novel this winter. I was blown away with the suspenseful blend of a domestic drama combined with a whodunit that takes place under the blazing sun of Australia. This was such a quick read and I eagerly gobbled up Harper’s wondrous prose. Plus, I got to escape the brisk weather I’m experiencing by diving into Harper’s land down under. Even with its blazing atmosphere, I guarantee the shocking revelation of this one will cause a chill to run right down your spine.

America’s strongest weapon returns to fight terrorism in this supernatural conspiracy thriller. Last year, Christopher Rice took the Bookstagram world by storm with his supernaturally-charged new series Bone Music: An adventurous thriller with a lycanthropy sweet spot, this one was not one to be missed. Since I loved Bone Music so much, it’s no surprise that I engulfed Blood Echo the minute it arrived. The follow-up to Bone Music is a conspiracy thriller that has the same fantastically-written characters, complete with dazzling imagery and a truly remarkable ending. This is the perfect series for the thriller fan looking to dip their toes into something a little different… just beware of what lurks under the water.

As Long As We Both Shall Live by JoAnn Chaney

A twisted new tale about marriage, centering around a man who had not one but two wives die mysteriously over the course of 20 years. JoAnn Chaney’s novels are gritty, exquisitely written and desirably shocking. One of my most anticipated releases, I actually read the first chapter four times because it’s that incredible. Each chapter flowed divinely into one another and kept me not only immersed, but desperate for more time with these characters. They are unapologetic, yet likable and sometimes you even find yourself rooting for the bad guy – if you can find out who that is. A domestic thriller that is both intriguing and brilliant, this novel makes the marriage in Gone Girl look like a fairy tale.

When Sylvie returns home to take care of her ill mother, she is haunted with memories of her sister Persephone’s unsolved murder. I am a sucker for cold-case mysteries so this one hit the spot. What I loved about this novel was how perfectly it combines murder with emotionally-charged characters whose lives were affected by death in a realistic way. Dare I say, by the end of this one, I was satisfied, yet a little emotional saying goodbye to these characters and closing the chapter on a harrowing story that left me with a planet-sized book hangover. The Winter Sister is the perfect winter read.

An Anonymous Girl by Sarah Pekkanen and Greer Hendricks

An anonymous survey and some extra cash? What could go wrong for Jessica when she signs up? Hold your breath. This story is not only brilliantly distinctive but Hitchcockian and twisted. I loved the pacing with this novel – it was perfectly syncopated with the characters and added such an enjoyable layer to the story. Like a ’90s n film, An Anonymous Girl is sleek, sexy and scintillating.

Marriage takes a completely twisted turn when Paul cheats on his wife Rebecca… and that’s only the beginning. The Woman Inside is a noir novel that is just as entertaining as it is dark. While there wasn’t a ton of action or suspense throughout the beginning, I was obsessed with reading about Paul and Rebecca. Scott didn’t rely on the cliché and overdone unreliable narrator who abuses alcohol in this novel, making it an impactful and real read. The Woman Inside deals with opiate addiction and is done so very well. Then the novel takes a rather shocking turn that featured one of the creepiest scenes I have ever read – the kind of scene that made me want to scream. A cinematic and daring novel that is both entertaining and harrowing, also featuring the best eye candy cover of 2019. This novel is the Ariana Grande of winter thrillers… and I don’t throw around that compliment easily.

A schoolgirl has a crush on her young new English professor – what can go wrong? Cut to 20 years later when a murder involving said English professor shocks a wealthy community in England, leading to an intense story you won’t see coming. This novel has a slow-burning, Big Little Lies vibe with a definite murder (a gruesome one at that) and a cast of characters that are so much fun to read. What I love the most about Jewell’s writing is how she is able to align her story with the speed at which her readers get to know the characters – it takes the story a step further with each dazzling page. Hypnotic, atmospheric and taut, Watching You is a novel that will stick with you for days after the shattering epilogue.

Abi gets the call every parent fears when the police tell her that her 16-year-old daughter Olivia is in a coma… and pregnant in The Night Olivia Fell. McDonald does a brilliant job of alternating between mother and daughter to give you a feel for not only each character but to witness each other through alternative viewpoints. When I first cracked open this one, it was a cold Monday night and I wanted to get about 100 pages in to get a feel for what I was reading. Well, I got my 100 pages in and then I couldn’t stop. While it’s not necessarily an action-packed thriller, the short chapters that alternate between Abi and Olivia are so addictive. This novel is an emotionally-charged domestic thriller that keeps your mind guessing as often as it tugs at your heartstrings.

This novel opens up with Swedish police finding a video on YouTube of a woman being stalked and shortly after discovering the video, she is murdered. If you follow me on Instagram, you’d know two things about me. 1) I have really become obsessed with Nordic noir. 2) The Joona Linna series by Lars Kepler is my favorite book series ever (sorry, Harry Potter). Now, while I’m only 30 pages in at the time I am writing this, I had to stop reading to work on this article because I was that terrified. The husband-and-wife writing duo known as Lars Kepler has a remarkable way of combining atmospheric terror with dazzling characters, keeping you 100 percent terrified the entire time. I remember how creeped out I was reading The Sandman and now that I’m on to Stalker, I can already tell you this one is much more terrifying.

Apparently, friendships in your 30s can be just as rough as the hangovers. When a group of friends get together for a New Years celebration and it results in murder, the line between friend and foe quickly becomes frighteningly thin. This one sounds brilliant and right up my alley. I absolutely love the Ruth Ware meets Agatha Christie vibe that the plot gives off and who hasn’t at one point wondered which one of their friends would kill them if they got the chance? The combination of a group of friends, one dead body and a cabin-in-the-woods setting makes this novel sound like a recipe for perfection. This novel screams winter thriller and my only question is – can I fake a sick day at work so I don’t have to put it down?

The Bone Keeper by Luca Veste

In this new release from Luca Veste, four teenagers go into the woods to investigate an urban legend and only three return. Twenty years later a woman emerges from the woods and people can’t help but wonder if this is the missing fourth friend or something much worse? Blame The Blair Witch Project or whatever you want, but I’ll call your bluff so quickly if you don’t get a little anxious thinking about being in the woods at night. The woods. At night. In the dark. Titles like this are the reason I plan my #TBR pile like a psycho. This isn’t a “during the week” read, this is a Saturday night, order sushi, lock the doors and turn off my phone read. I’ll emerge back on Bookstagram like I am the one escaping the woods when I’m finished. Don’t search for me.

Theo Faber’s new patient is a little tricky. A few months prior, Alicia Berenson shot her husband dead and hasn’t spoken a word since. The plot to this one sounds chilling and rather unique so I am really excited to fall down the rabbit hole with it. Something about a psychological thriller from a debut author really makes me feel like I’ve hit the #TBR lottery, as you never know what a fresh-on-the-scene author is going to come up with and sometimes that can be as much to anticipate as the book itself. 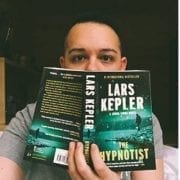 Garrett (Gare), is the voice behind @gareindeedreads. His story is simple; he loves to read and loves movies. Gare love to watch movies based on the books he's read and growing up, he was always an avid reader. As he got older, classes, friends and work started to affect his reading game, only making time for the books he truly loved. Cue a few years later and he has finally found a balance between work, his social life and reading. Casting who he thinks would make great characters in the books he reads, Gare loves sharing his passion for movies and books with the world.

Believe in your shelfie!

Sign up for the latest book news and fun ways to win free books.

When you subscribe to our newsletter, we’ll email you weekly book recommendations, news, updates, and relevant promotional material from our brands. We do not share your information with partners or third parties. You can unsubscribe at any time.

More for your #TBR pile

The best page-turners to read this winter

10 New poetry collections you need to read in 2020

7 Books that will truly make you happier

The most anticipated thrillers of 2020