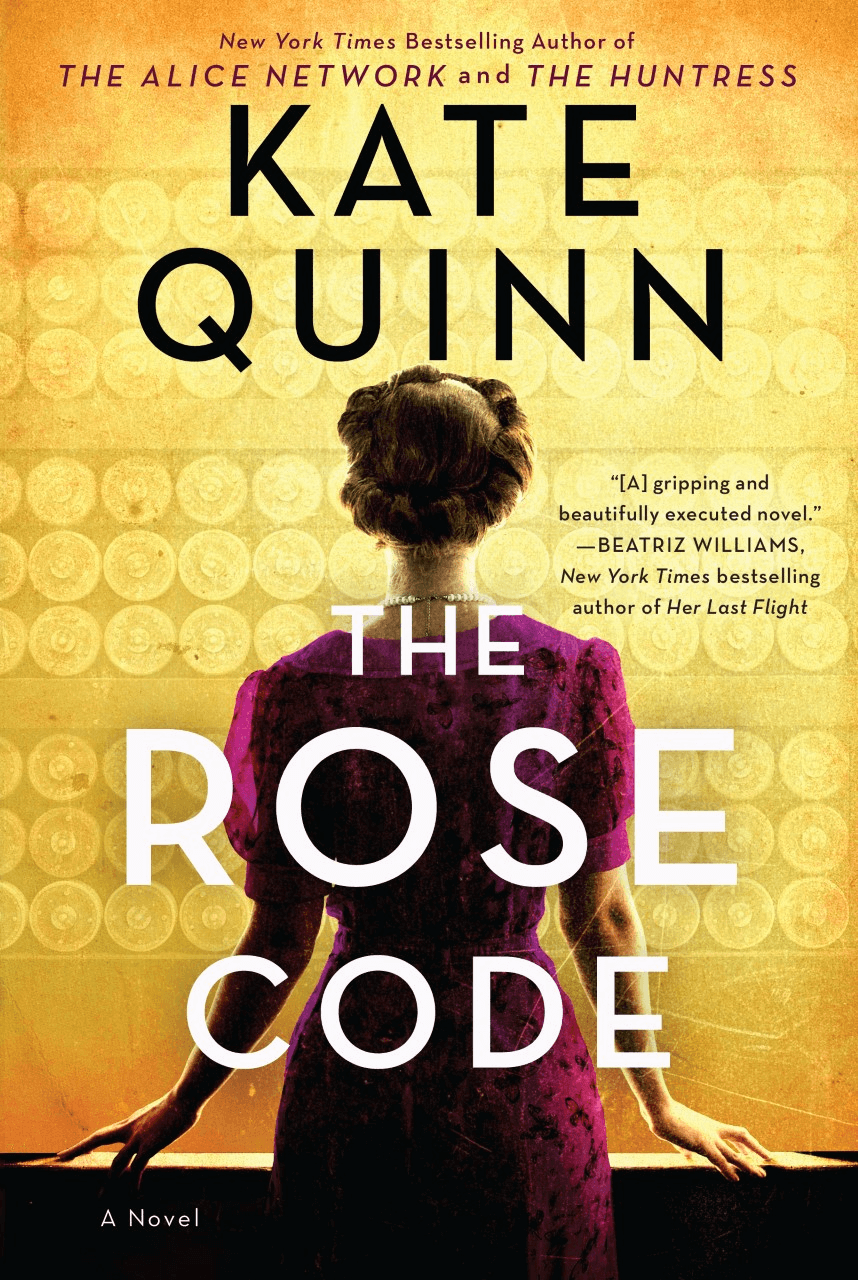 The New York Times and USA Today best-selling author of The Huntress and The Alice Network returns with another heart-stopping World War II story based at the mysterious Bletchley Park, where the best minds in Britain train to break German military codes. Twisty and evocative, the novel centers around three very different women who join the war against Nazi Germany as codebreakers of Bletchley Park, only to find that the real puzzle lies inside the Park itself as a traitor sets them against each other in a betrayal reaching past the end of the war.

A native of southern California, Kate Quinn attended Boston University where she earned a Bachelor’s and Master’s degree in Classical Voice. She has written four novels in the Empress of Rome Saga, and two books in the Italian Renaissance, before turning to the 20th century with The Alice Network and The Huntress. All have been translated into multiple languages. Kate and her husband now live in San Diego with two rescue dogs. Read on to hear about the books that changed her life.

I recommend to everyone: JUBILEE TRAIL by Gwen Bristow. A novel about female friendship and female adventures in pre-Gold Rush California. It hooked me forever on historical fiction.

That was my favorite read last year, and why: THE FLIGHT PORTFOLIO by Julie Orringer. An American scholar becomes a Marseilles escape facilitator for artists, Jews and political outcasts fleeing Hitler—it’s an incredibly moving arc, watching an indecisive dilettante become a steely-eyed hero willing to spit in the face of the Gestapo to get just one more innocent out of Nazi clutches.

Whose author I would love to have lunch with: Bernard Cornwell, who not only writes big bold beautiful historical novels in epochs ranging from King Arthur’s Britain to the Napoleonic War, but who also comes across as smart, unapologetic and down-to-earth in his interviews.

That made me realize language had power: MADENSKY SQUARE, by Eva Ibbotson. This slice-of-life from the eyes of a dressmaker in pre-WWI Vienna is so evocative—whether describing a lace gown, a doomed love affair, a comic disaster at an engagement luncheon, or a Viennese borough full of eccentric neighbors—Ibbotson’s ability to word-paint is unparalleled.

I’d like to see adapted to the screen: DREAD NATION by Justina Ireland. Two butt-kicking Black heroines in a fictionalized post-Civil War America riddled by zombies—it would be epic.

That made me laugh out loud—or cry—while reading it: Laugh? Laurie Colwin’s HOME COOKING with its hilarious tales of kitchen disasters and epically bad dinner parties. Cry? WENCH by Dolen Perkins-Valdez, with its four brave heroines whose lives are tied in such cruelly hopeless knots.

That has the most gorgeous cover: MEXICAN GOTHIC by Silvia Moreno-Garcia. It’s like a Frida Kahlo painting.

With the best opening line: “The world had teeth, and it could bite you with them anytime it wanted.” THE GIRL WHO LOVED TOM GORDON by Stephen King.

Bookstore that I frequent/is my favorite: Warwick’s of La Jolla in southern California!

Bonus: The book that you read with your best friend: CODE NAME VERITY by Elizabeth Wein. There are few friendships out there to beat the one between Maddie and Julie!

Want more Kate Quinn? Read our featured interview with Kate on the paperback release of her novel The Rose Code!