10 Cozy Novels Featuring Food and Authors from Around the World

10 Cozy Novels Featuring Food and Authors from Around the World

Nothing pairs better with a delicious meal more than a good book. Well…maybe a tasty glass of wine or a delicious dessert, but a sweet read is a close second! If you like to try new foods and have a craving for books about the subject, then these ten picks are just for you. Featuring foods –and authors– from all around the world, we’ve got stories that will make you laugh, cry, and think about how all of your favorite foods ended up in America. 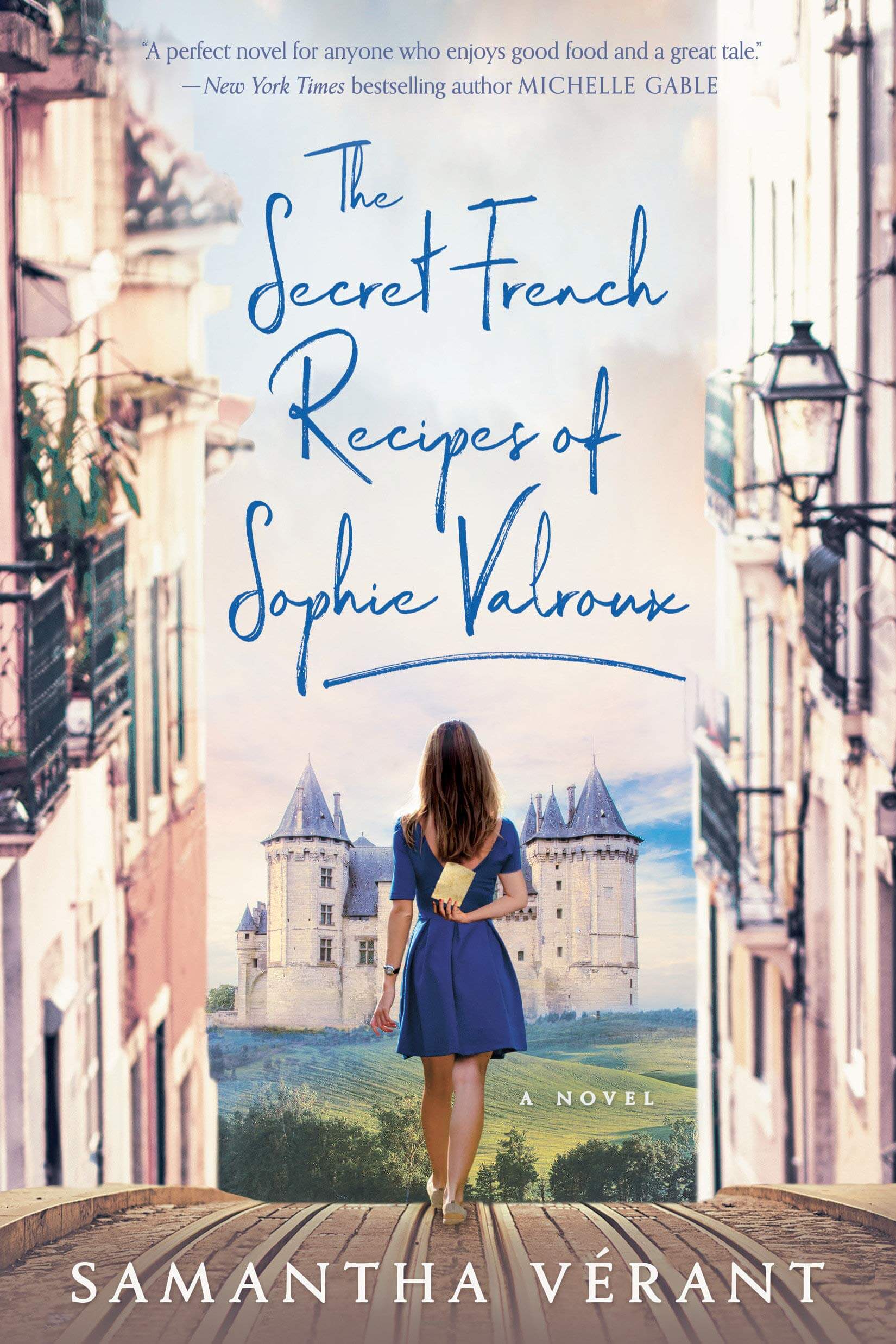 The Secret French Recipes of Sophie Valroux by Samantha Vérant

Since she was a child, French-born American girl Sophie had one goal in mind, and that was to become part of the 1% of women chefs operating a Michelin-starred restaurant. From a young age, she learned about French cuisine from her grandma, and that passion grew after she graduated from the Culinary Institute of America, which led her into a promising career. Just as she’s starting to see all of her dreams come true, another chef sabotages her and destroys everything she’s worked so hard for. To gain some perspective, she travels back to France and finds that success can come in several different flavors. 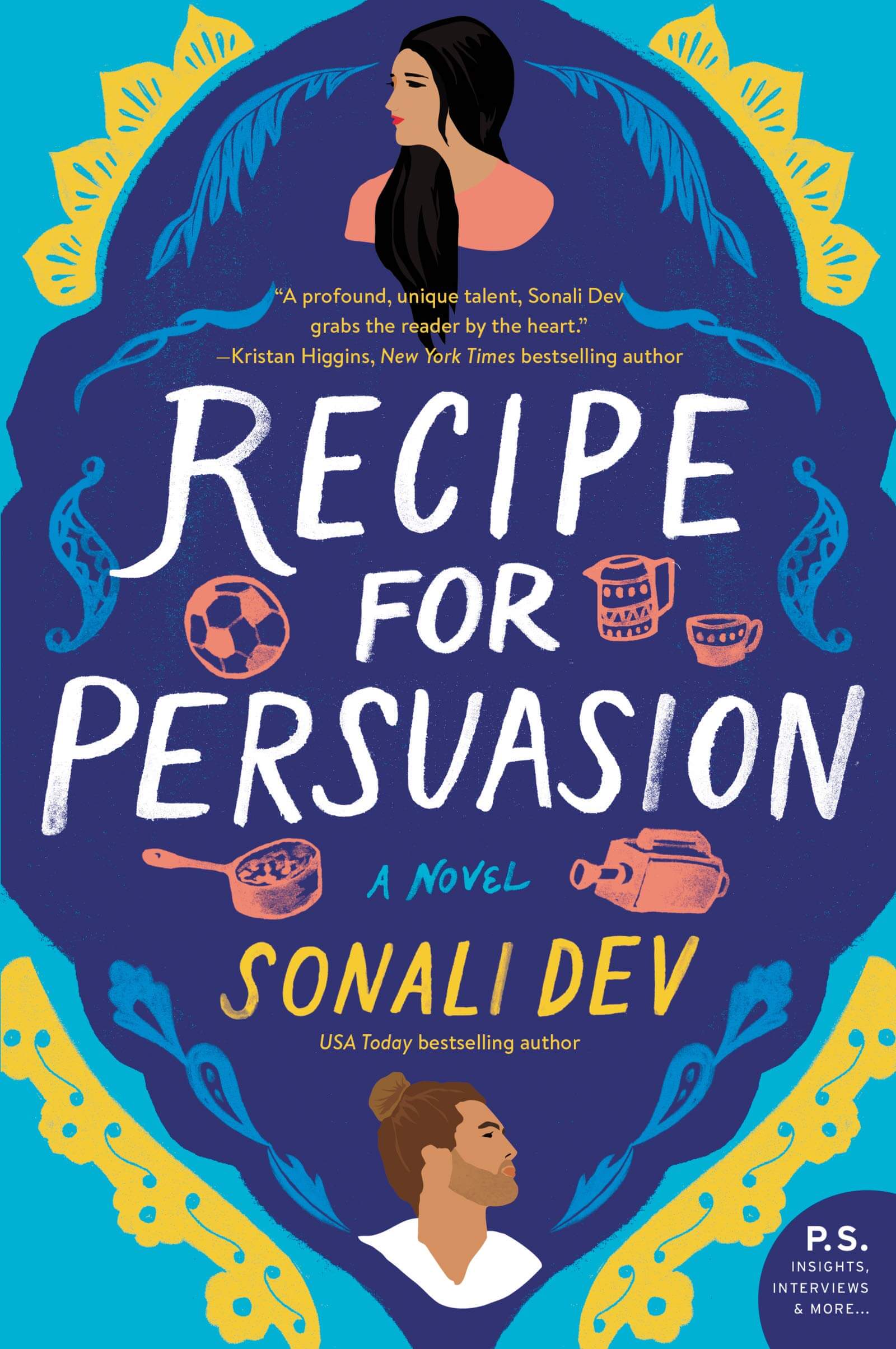 Ashna Raje’s overbearing mom is constantly on her case when it comes to her struggling restaurant. So when she is asked to be on Cooking with the Stars, she knows this is just the boost she needs. That all changes when she realizes that she’s partnered with Rico Silva, her soccer star ex-boyfriend who broke her heart. As they both try to prove that they’ve moved on, the viewers at home are convinced more than ever that these two have crazy chemistry and should be together. As the competition continues, will they win a chance at re-heating their romance? 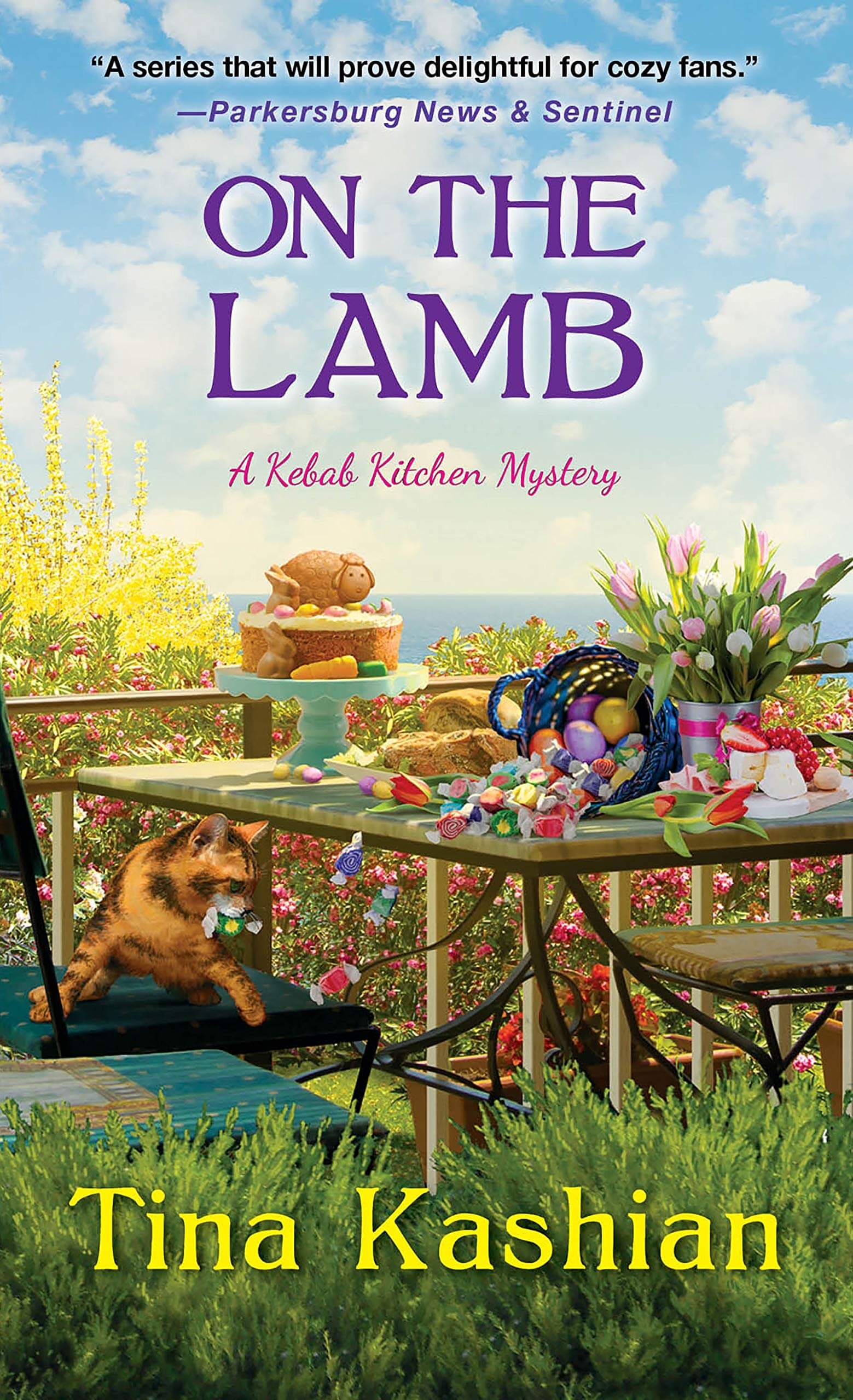 On the Lamb by Tina Kashian

The town of Ocean Crest is buzzing with bikers to commemorate the annual Bikers on the Beach fundraiser for injured veterans. Lucy Berberian knows this is a big event and has been working day and night to prepare her family’s Mediterranean restaurant for the crowd. Meanwhile, her friend Melanie is busy in her candy store, creating tasty treats for the tourists to enjoy. But when someone is found dead at the beach bonfire, and Melanie is the prime suspect, Lucy must put The Kebab Kitchen on the back burner to save her friend from going up in flames. 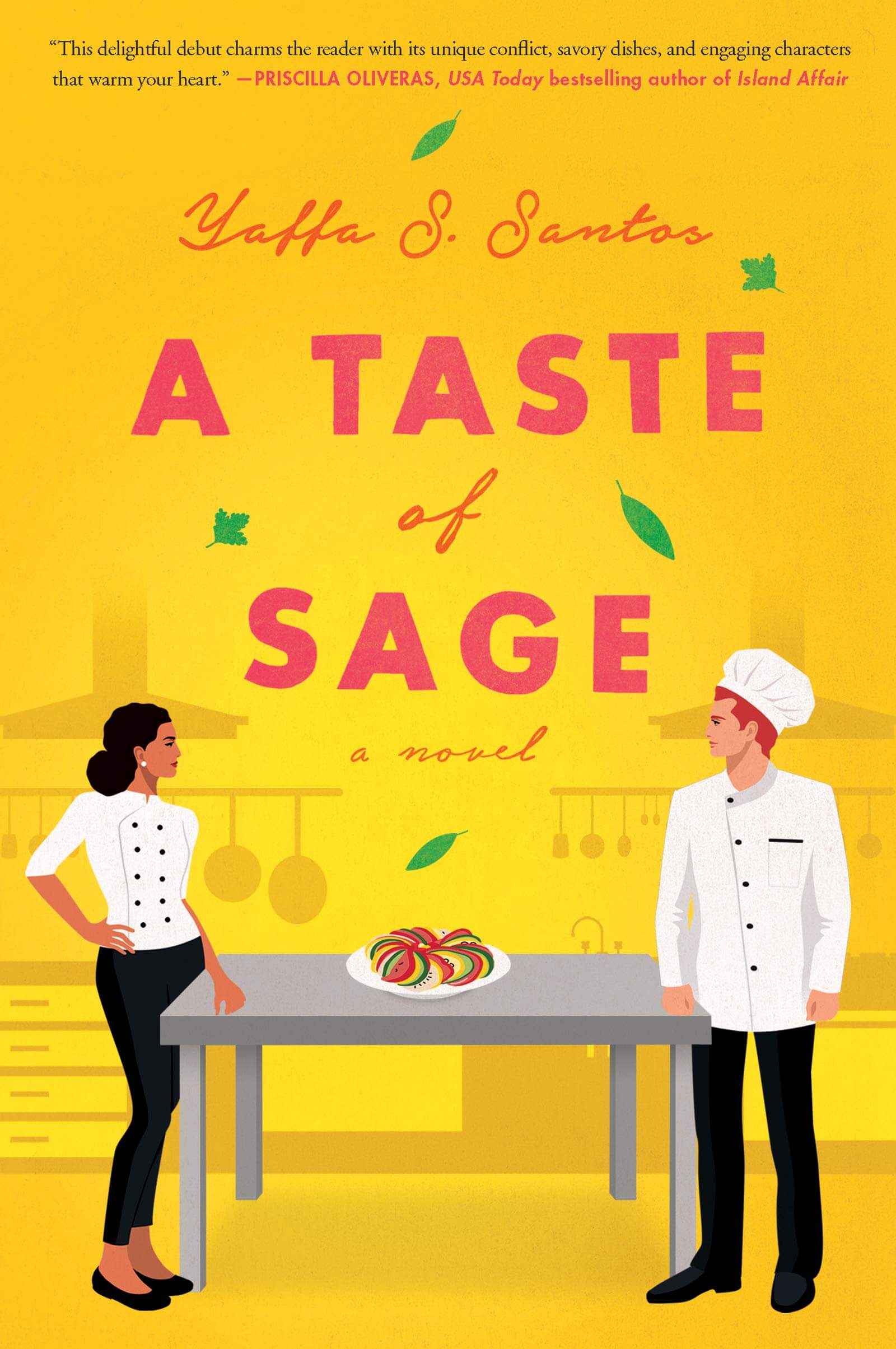 A Taste of Sage by Yaffa S. Santos

Lumi was raised with traditional Dominican meals that inspired her to open up a fusion restaurant in the middle of Manhattan. When her dream of running her own business turned into a nightmare, she was forced to take a job in a French restaurant, owned by well-known chef, Julien Dax. However, Lumi had a secret; she was born with synesthesia, meaning she could perceive emotions simply by tasting the cook’s cuisine. Although she tried to avoid Julien’s dishes, she could no longer resist, and soon after, emotions came to a boil. As things heat up in the kitchen, it looks like love might be what’s on the menu. 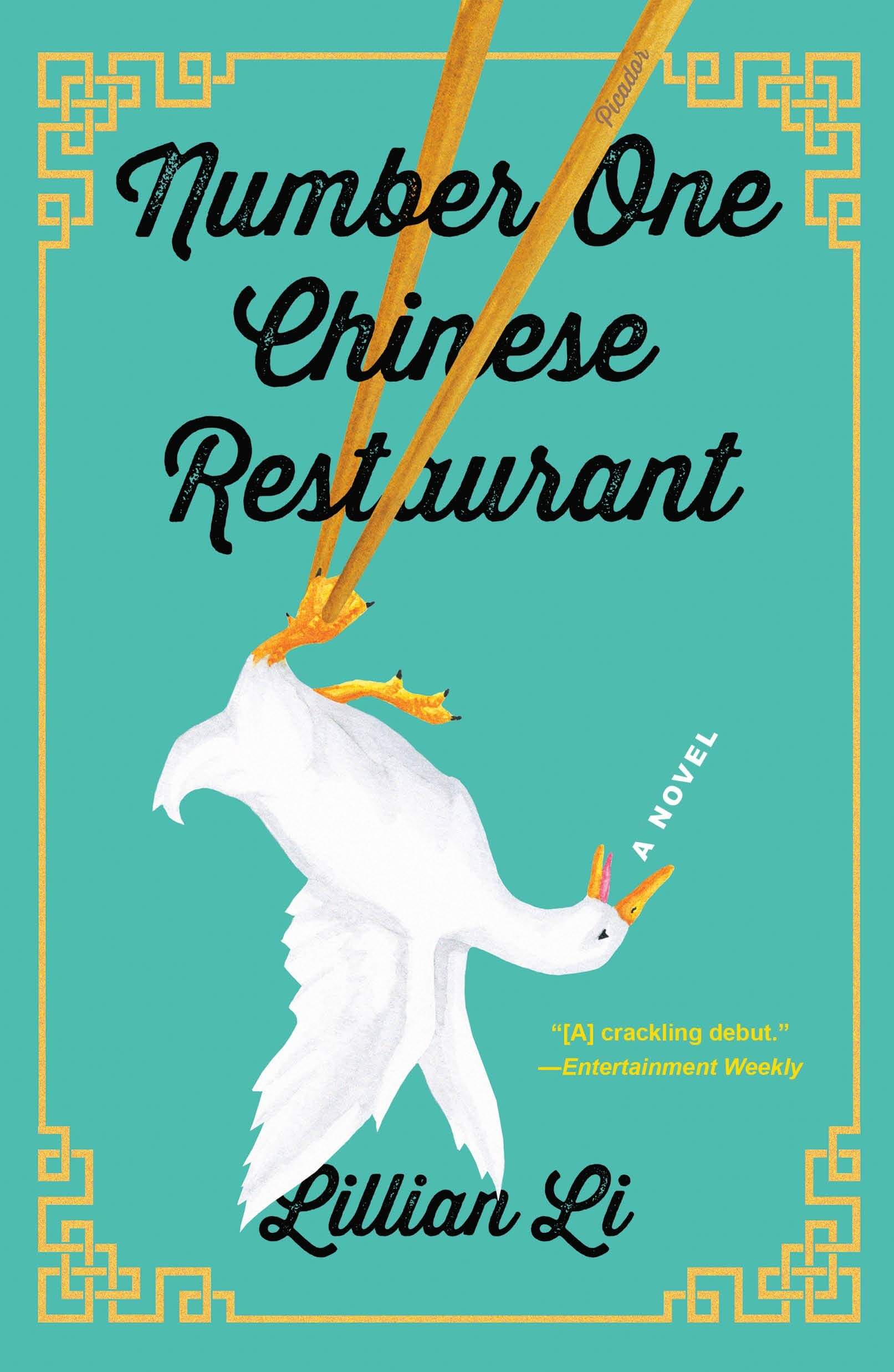 From the outside, The Beijing Duck House appears to be your average family-owned Chinese restaurant. But on the inside, it’s more like a theater than an eatery with all of the drama that happens within those four walls. When things finally come to a head, owner Jimmy Han makes it clear that he wants to trade up for something more spectacular. On the contrary, his brother wants to turn back the clock and go back to basics. Stuck in between are the teenagers, who always seem to find trouble. Can this family find common ground and stay at the top or will they go their separate ways and close up shop? 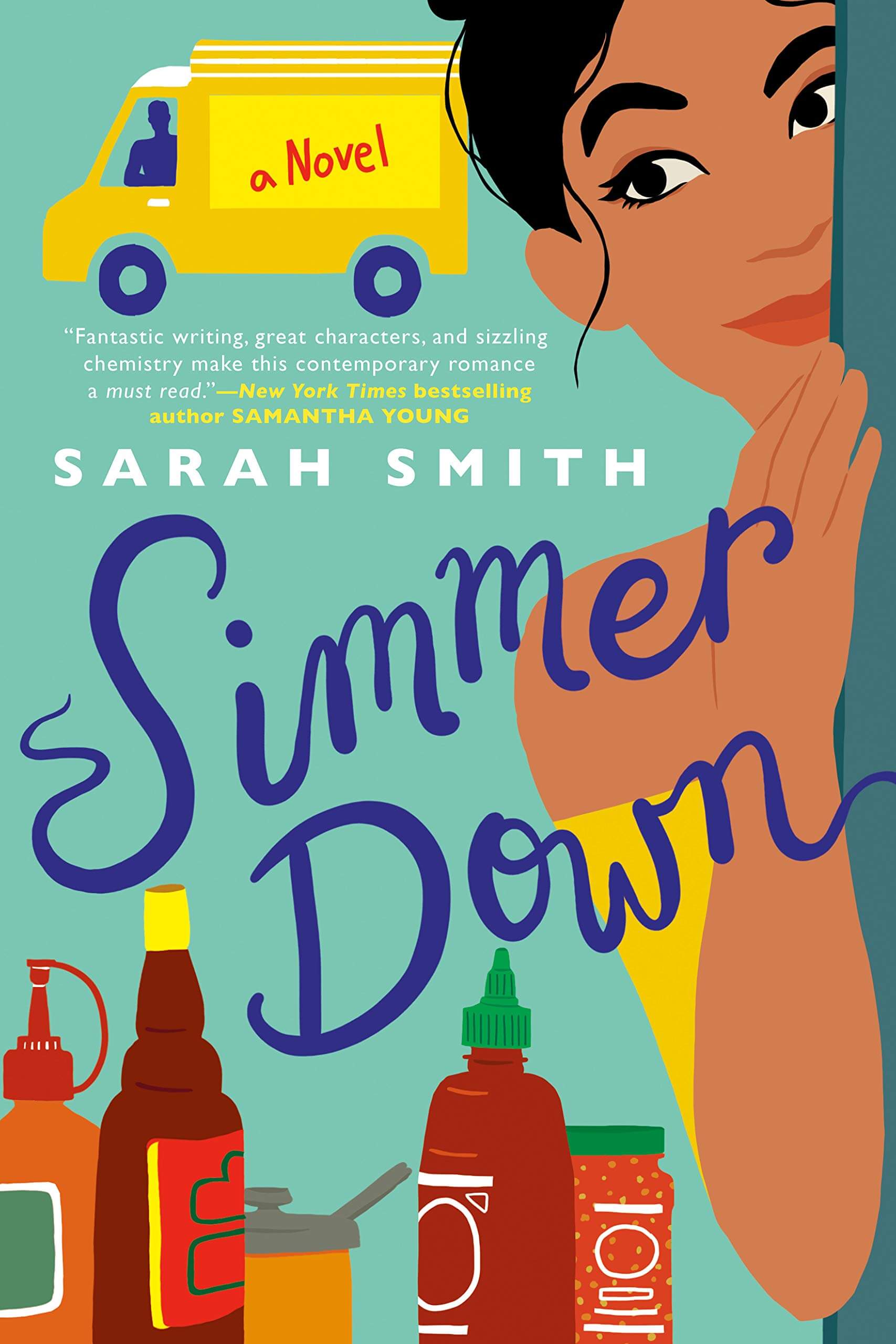 Simmer Down by Sarah Smith

When Nikki DiMarco’s mom convinced her to quit her job and help out with her family’s Filipino food truck in Maui, she knew it wouldn’t be a day at the beach. Even though Tiva’s Filipina Kusina was busy and served up delicious dishes all day, they were in for some fierce competition with the new Brit in town, Callum James. Even though he’s easy on the eyes, he’s hard to get along with, as he creeps in on their space and starts to steal customers. But all is fair in love and food wars, and as the summer goes on, Callum starts to grow on her, causing her to take a second look at the menu. 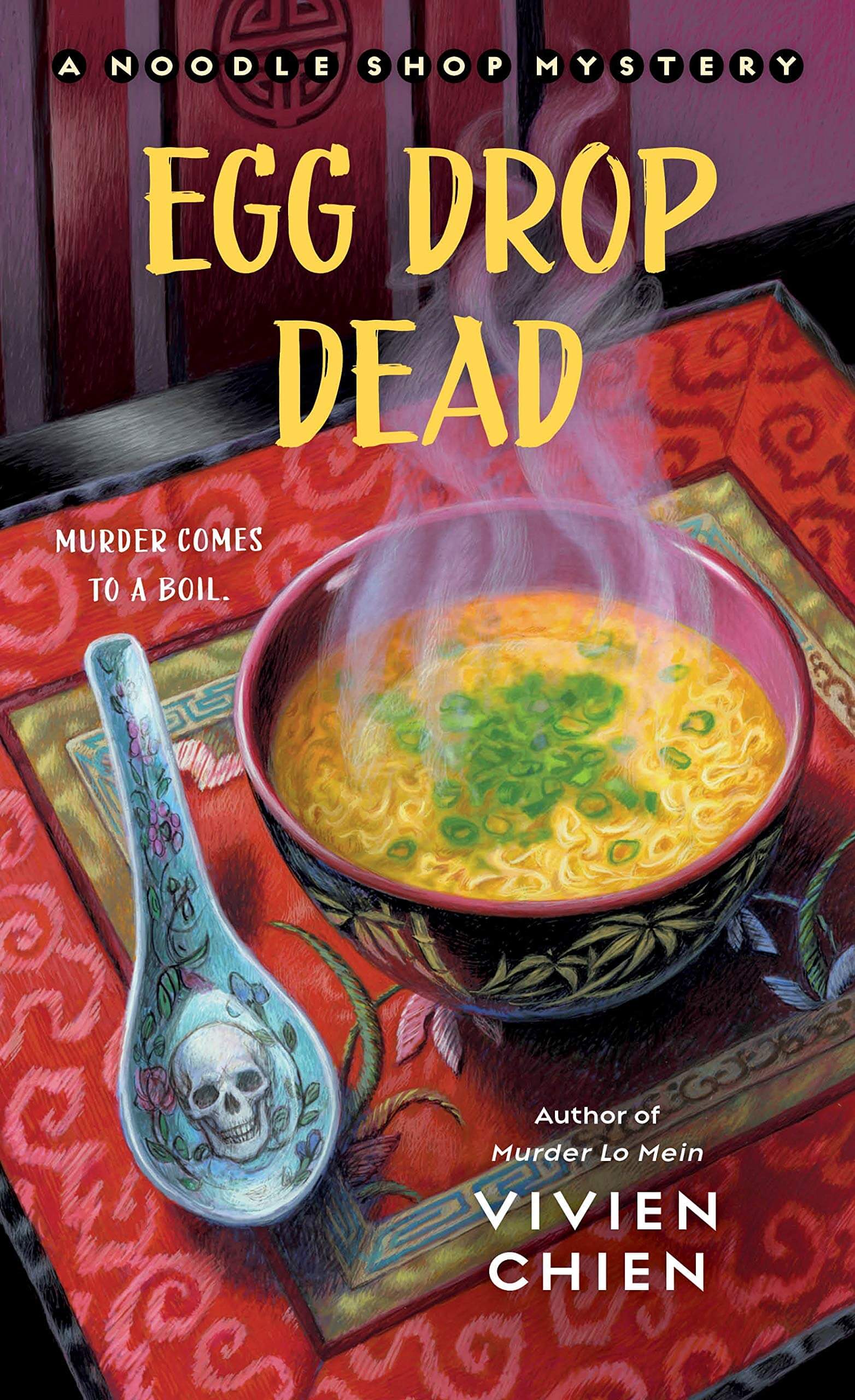 When Donna Feng came to America from China, she had one goal in mind and that was to be a successful businesswoman. She did just that and was now the proud owner of the Asia Village shopping center. Lana Lee was beyond excited to be working for her at Ho-Lee, but when another worker winds up dead during her Lana’s first catering event, everything goes up in flames. When Donna hands Lana a mysterious thumb drive right before the police arrive, she realizes that she must take things into her own hands and try to solve this murder mystery before it happens again. 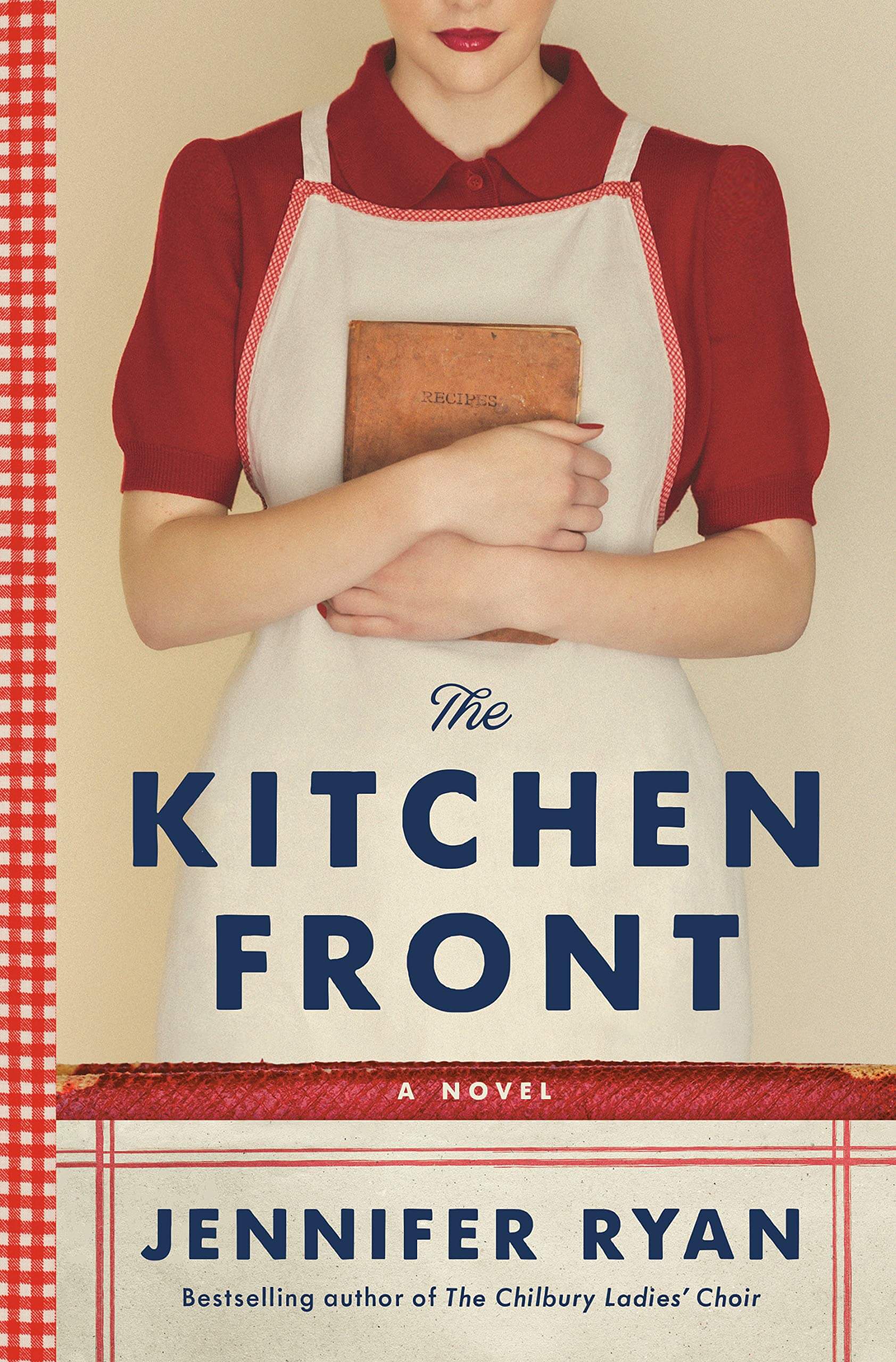 The Kitchen Front by Jennifer Ryan

Amid World War II, Britain has undergone much suffering. Many households have found themselves rationing food, and a BBC radio program wants to help by hosting a cooking contest. The lucky lady who wins will receive the coveted grand prize of becoming the show’s first female co-host. The final four women in the running have a lot at stake, including a widowed young mom, a struggling maid, a desperate housewife, and a chef that wants to prove her place in the kitchen. However, as things heat up and tempers flare, instead of coming together, this community starts to fall further apart. 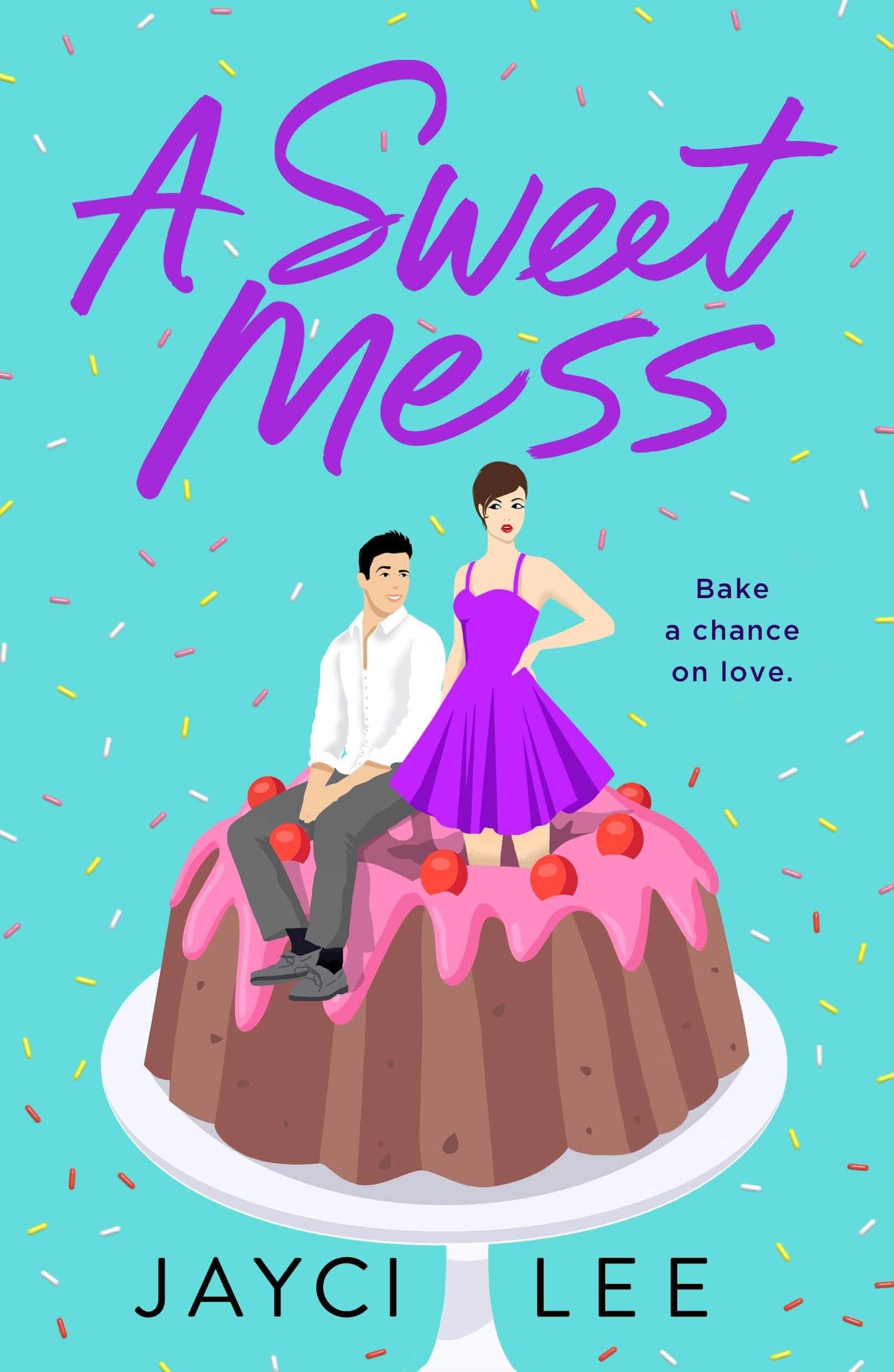 A Sweet Mess by Jayci Lee

Aubrey Choi doesn’t have time to concern herself with dating; she’s too busy running her popular bakery, Comfort Zone. However, things quickly change when she locks eyes with a gorgeous Korean man named Landon Kim. But when she finds out that he’s really a food critic who’s ripped Comfort Zone to shreds, she starts to worry that she’s lost her chance at love and her beloved bakery. Desperate to fix things, Landon makes her a cast member on his new cooking show as a way to repair her reputation and the relationship. Will there be more lovin’ in the oven or is this just a recipe for disaster? 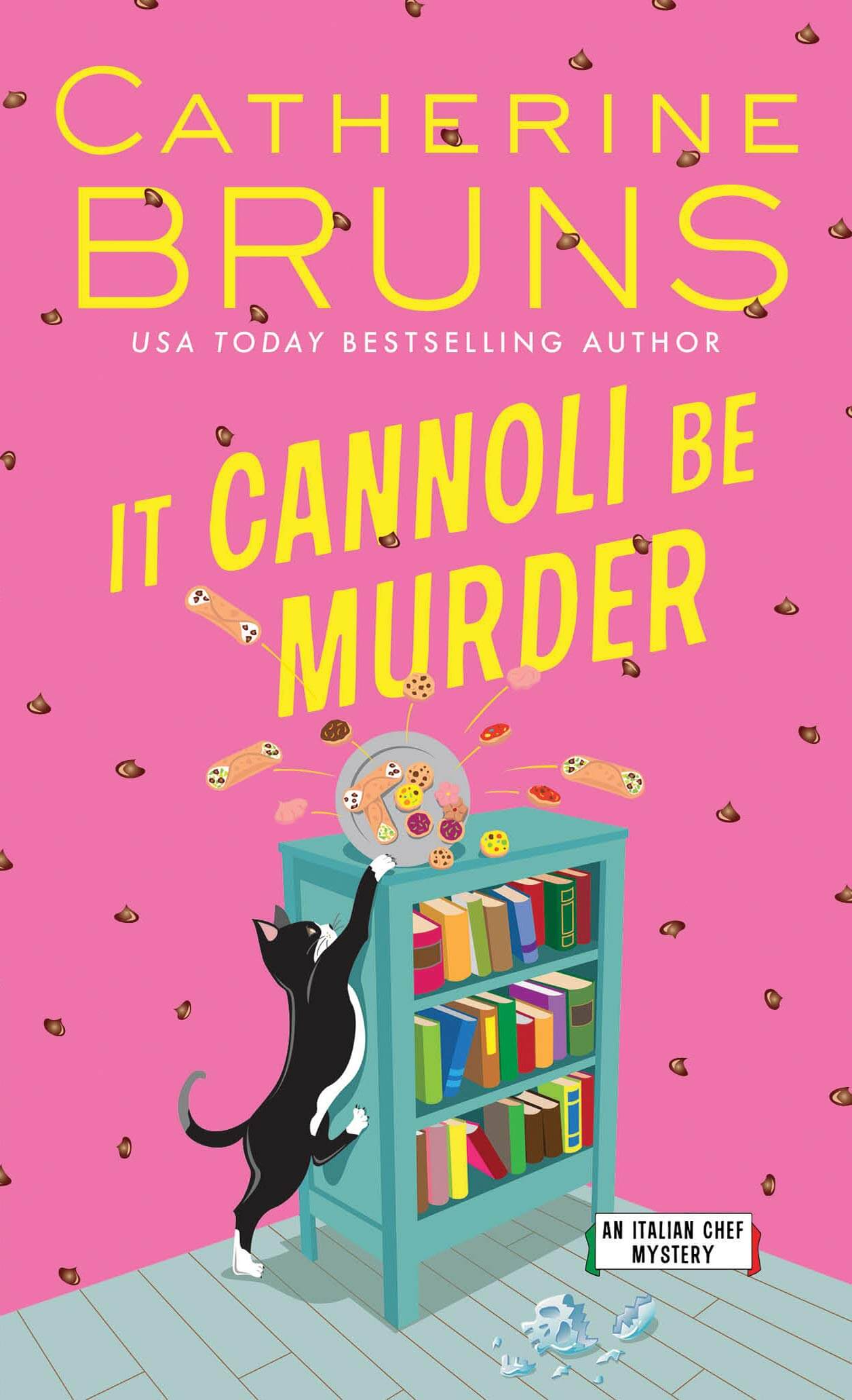 It Cannoli Be Murder by Catherine Bruns

Even though Tessa Esposito lost her husband six months ago, she’s hoping to shift her focus onto her new restaurant. Beyond that, she has agreed to cater her cousin’s event with some of her mouthwatering Italian desserts. It also doesn’t hurt that Preston is a best-selling author and will draw a nice crowd. However, no one could’ve predicted that a riot would break out and Preston’s publicist would end up dead. Nobody saw this plot twist coming, and now everyone is a suspect. When the truth comes out and secrets are revealed, some partygoers will be left with a bad taste in their mouth.