It’s that time of year again, where The Hallmark Channel pulls on our heartstrings with their happy, holiday movies. Nothing goes better with a Christmas flick than a romantic read, and we’ve got you covered with this list of love stories. When you’re done with your movie marathon, make sure to binge these books to keep the holiday romance alive all season long. 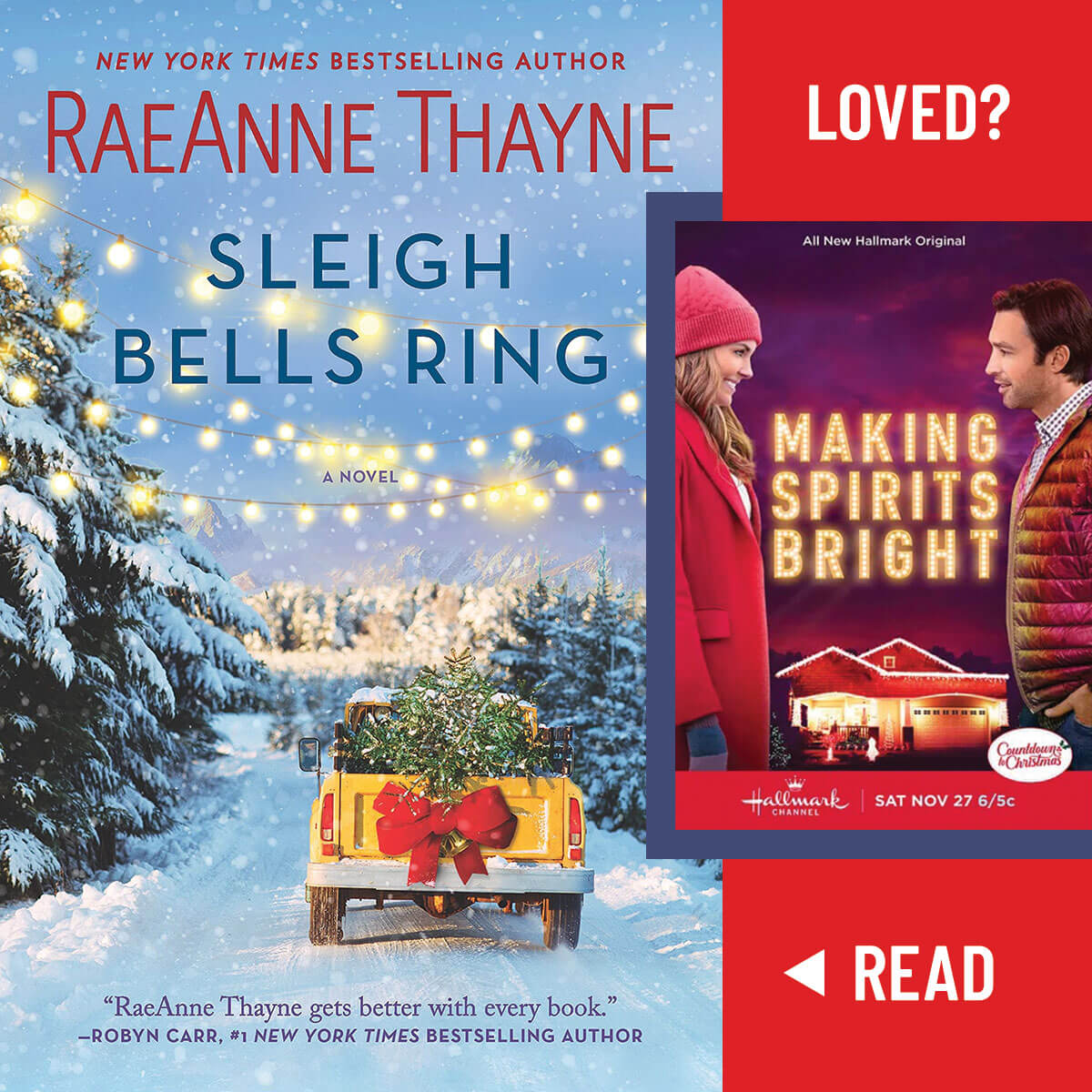 If you’re staying in town for the holidays, watch Making Spirits Bright, then read Sleigh Bells Ring by RaeAnne Thayne. Annie used to love Angel’s View Ranch, but when her grandpa sold it to the Sheridans and she became an employee, her feelings changed. Now, she’s taking care of her niece and nephew because they’ve recently lost their mom. To make their spirits brighter, Annie takes them to the ranch but finds out that Tate Sheridan is re-selling the property. With everybody on edge, Annie starts to realize that the tension building between her and Tate might make this a magical Christmas after all. 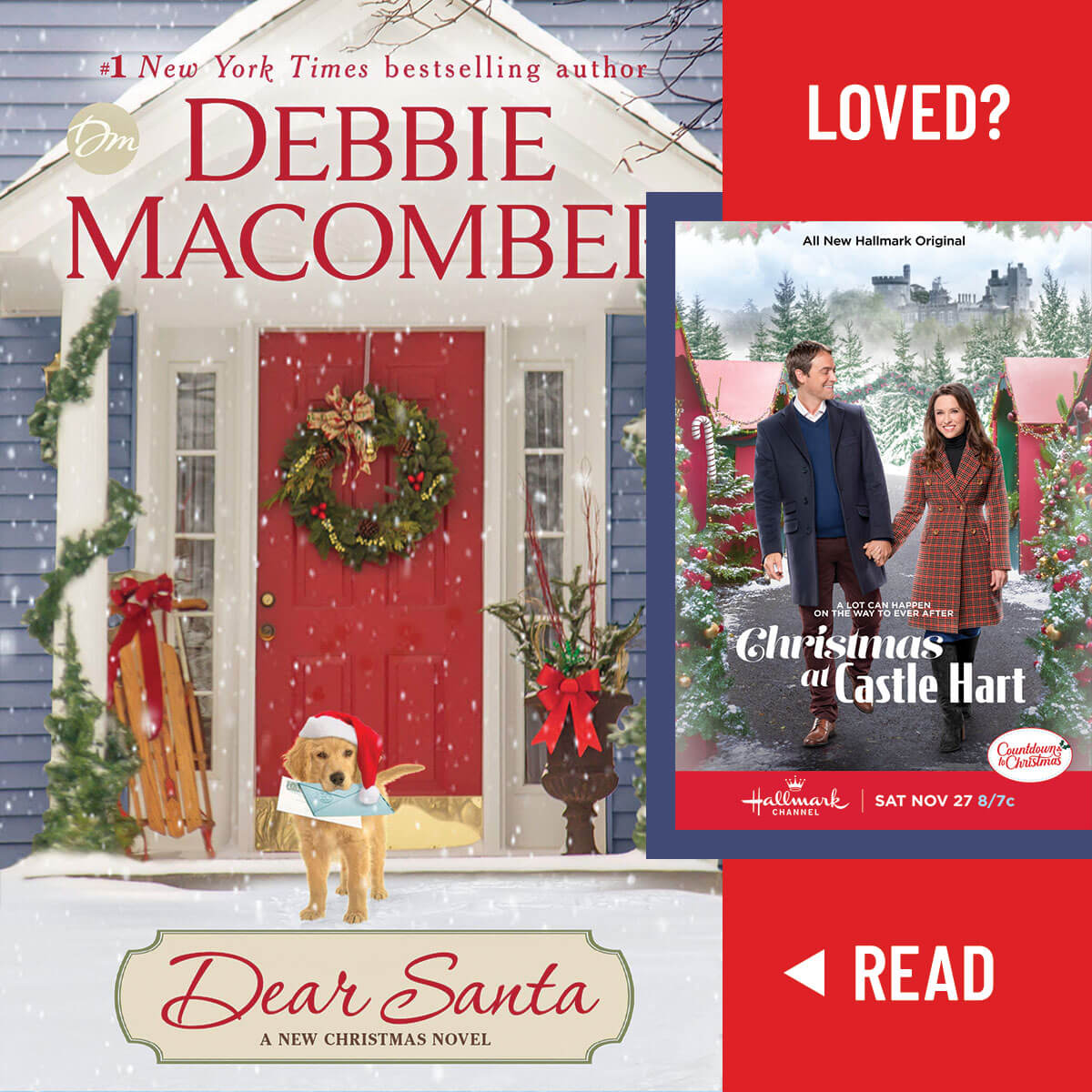 There’s nothing like a festive Christmas Party to get you ready for the holidays! Once you see Christmas at Castle Hart, you’ll want to read Dear Santa by Debbie Macomber. Lindy has been feeling down in the dumps this holiday season after her boyfriend cheated on her with her best friend. When her mom tells her to write an open letter to Santa, she decides to try it for old times’ sake. Little does she know that this letter is about to open up Pandora’s box, in the best way possible. Lindy starts to manifest holiday magic and realizes that this might be her best Christmas yet. 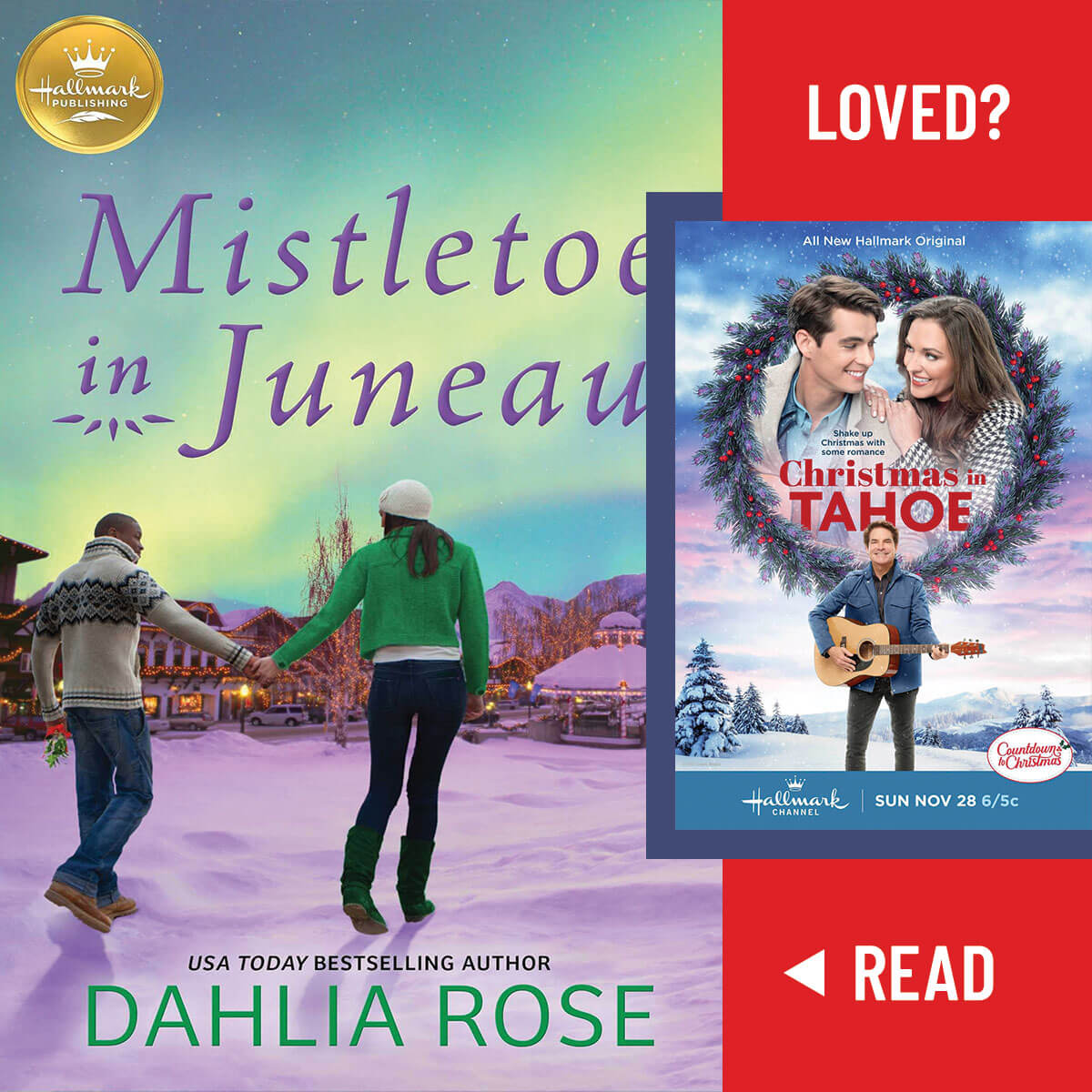 After you watch Christmas in Tahoe, you’ll want to read Mistletoe in Juneau by Dahlia Rose. Danni’s life revolves around social media in the big city. But when she ends things with the guy she’s been seeing, she realizes that she needs a break from New York this Christmas. When she books a trip to Juneau, Alaska, to visit an old friend, she is pleasantly surprised by how much she likes the quiet community…and the local sheriff. As sparks fly and Declan and Danni get closer, they’re faced with a dilemma, wondering if they should put out the flame or let the fire burn. 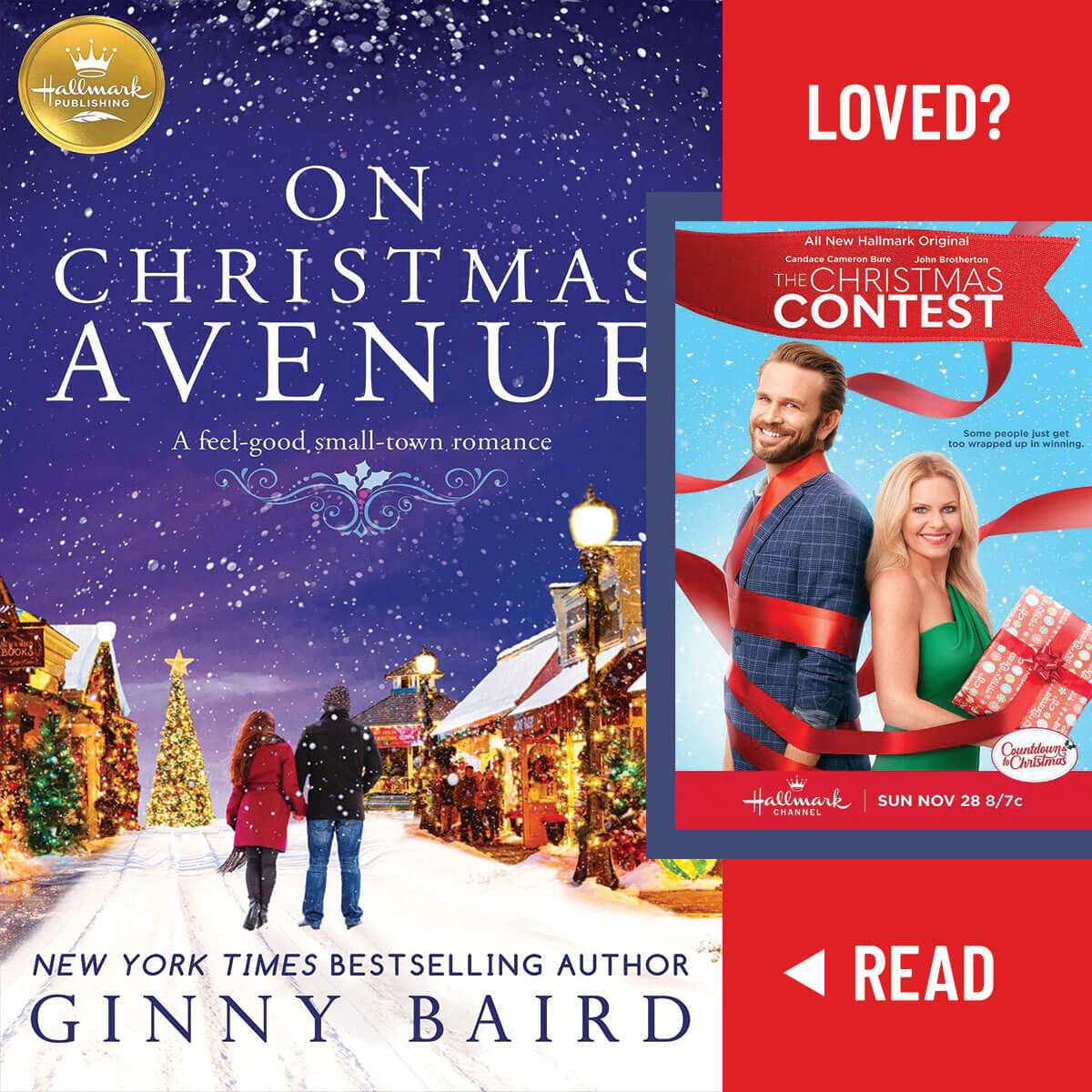 If you love a good competition, watch The Christmas Contest, then read On Christmas Avenue by Ginny Baird. The tiny town of Clark Creek is struggling this holiday season. When the mayor comes up with an idea to hire a Christmas Consultant, her sheriff son Evan strongly objects. Disregarding his concerns, she hires Mary, who is determined to turn things around with a fundraising parade. Even though Evan and Mary butt heads about practically everything, they can’t deny the chemistry that is brewing between them. With love in the air, it looks like there will be plenty to celebrate in Clark Creek this Christmas. 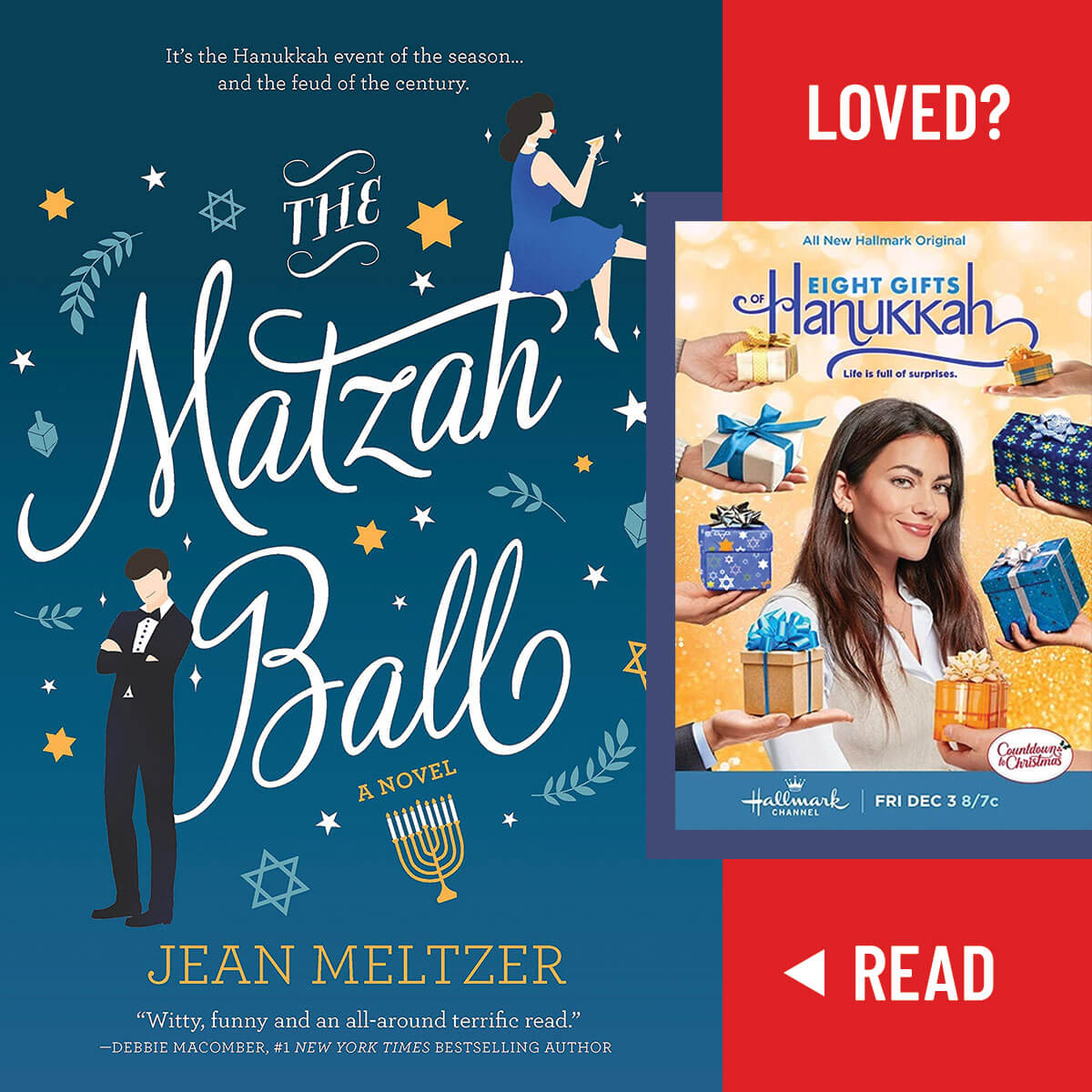 When you’re done watching Eight Gifts of Hanukkah, pick up a copy of The Matzah Ball by Jean Meltzer. Although Rachel is Jewish, she has a secret career writing Christmas romance novels, even though she doesn’t celebrate the holiday and hasn’t been in a relationship in years. When her publisher asks her to write a Hanukkah love story, she decides to go to the Matzah Ball for inspiration. When she runs into Jacob, her childhood enemy, she can’t believe that she’s attracted to him. Even though it seems stranger than fiction, Rachel is ready to see where this romance goes. 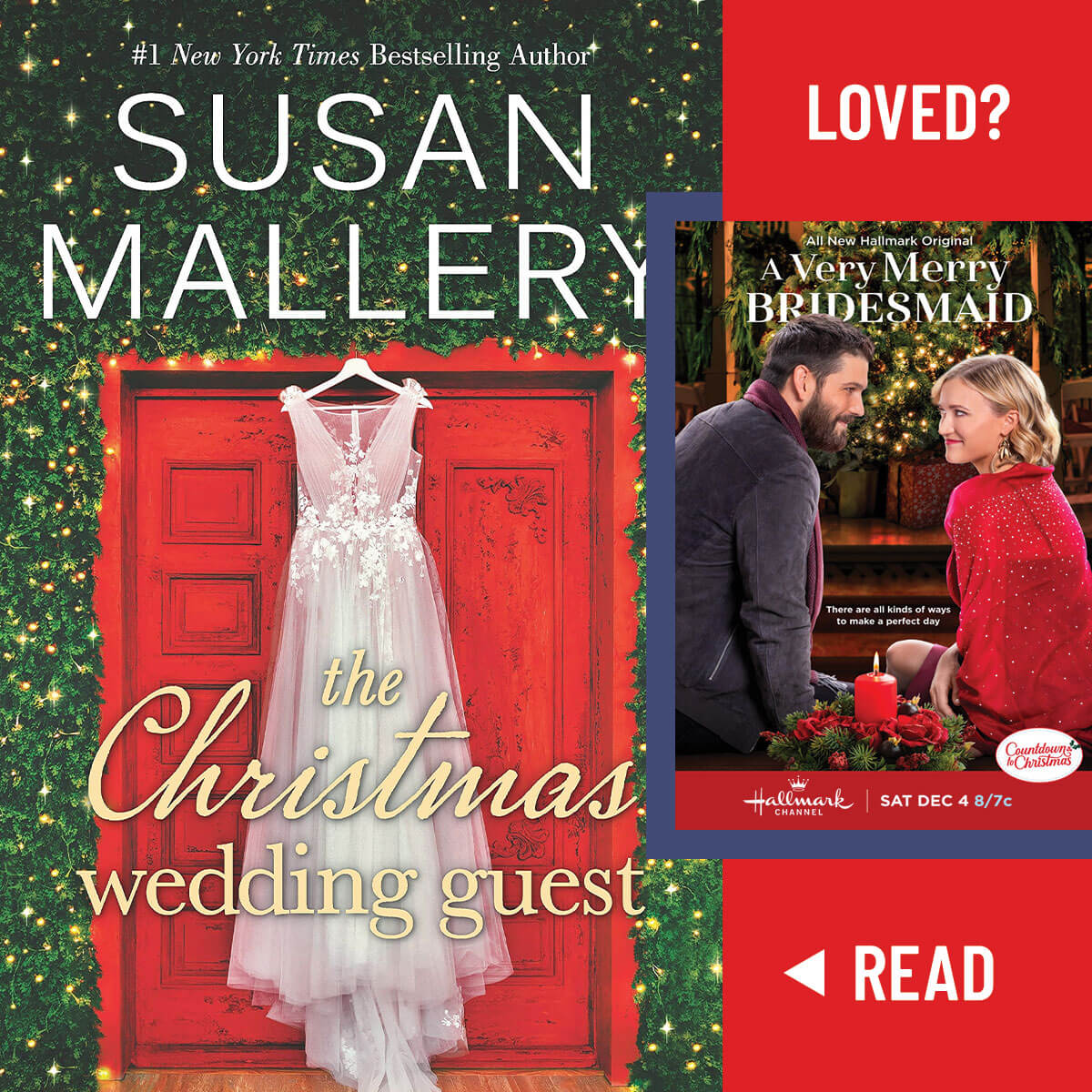 Once you’ve seen A Very Merry Bridesmaid, let the holiday cheer carry on by reading The Christmas Wedding Guest by Susan Mallery. Dena and Reggie are sisters who like the idea of love, but just don’t think it’s in the cards for them. But when Reggie’s ex-boyfriend Toby resurfaces, so do all of their old feelings. Meanwhile, Dena is preparing to be a single mom, by choice, when a widowed singer checks into the inn where she works. Inspired by her love for her unborn child, Micah starts to feel like maybe he could love again. It looks like these sisters might finally make their Christmas wishes come true. 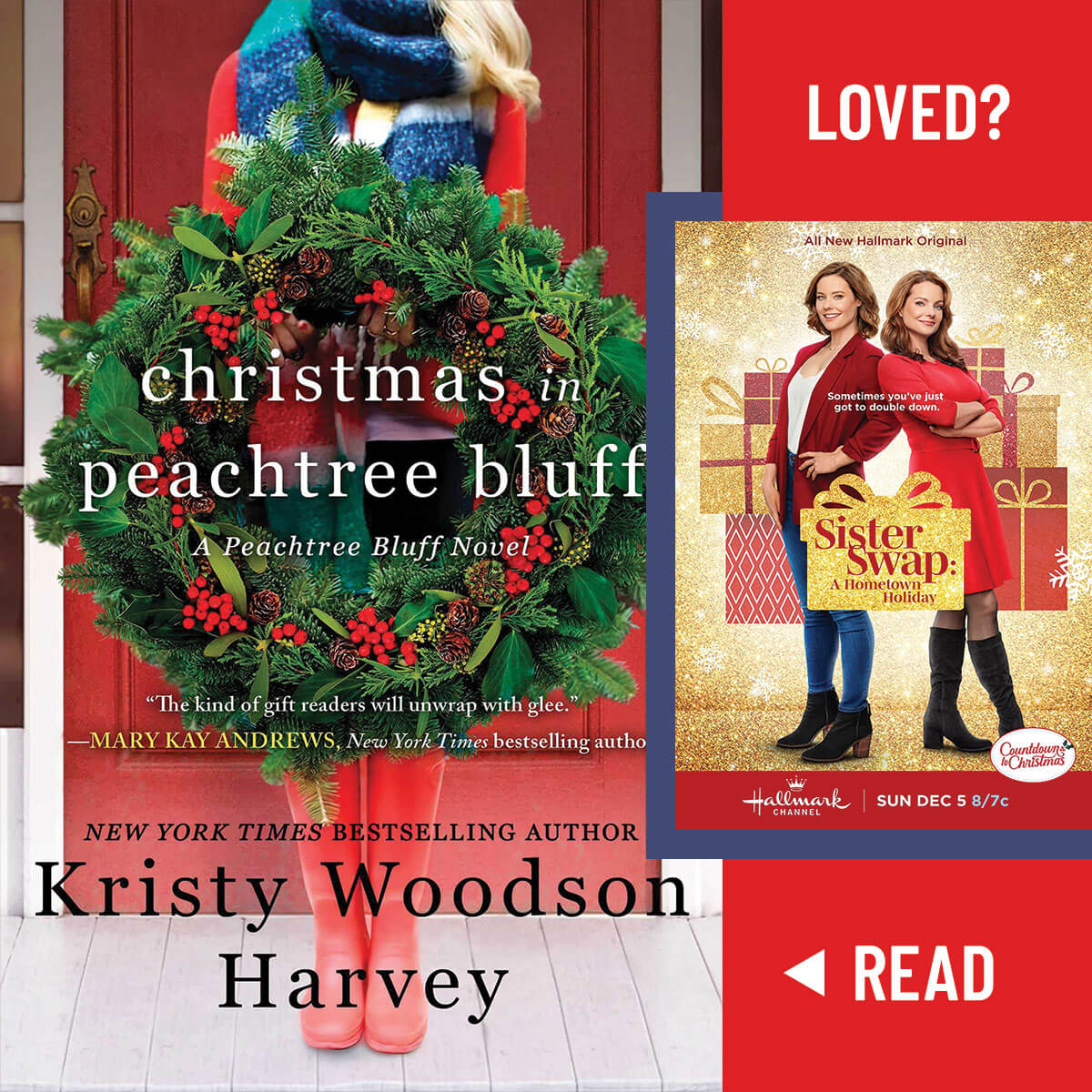 After you see Sister Swap: A Hometown Holiday, stay in the holiday spirit by reading Kristy Woodson Harvey’s Christmas in Peachtree Bluff. When James and Caroline decide to divorce, their daughter Vivi decides to make life miserable for everyone. Caroline is at the end of her rope and decides that Vivi should spend the holidays in Peachtree Bluff with her mom, Ansley. But on the way there, a huge hurricane comes through, forcing the three of them to hunker down together with nothing to do until the storm passes. As Caroline’s sisters try to come up with a plan for them to all be together one last time, everyone starts to realize the importance of family and the meaning of true Christmas. 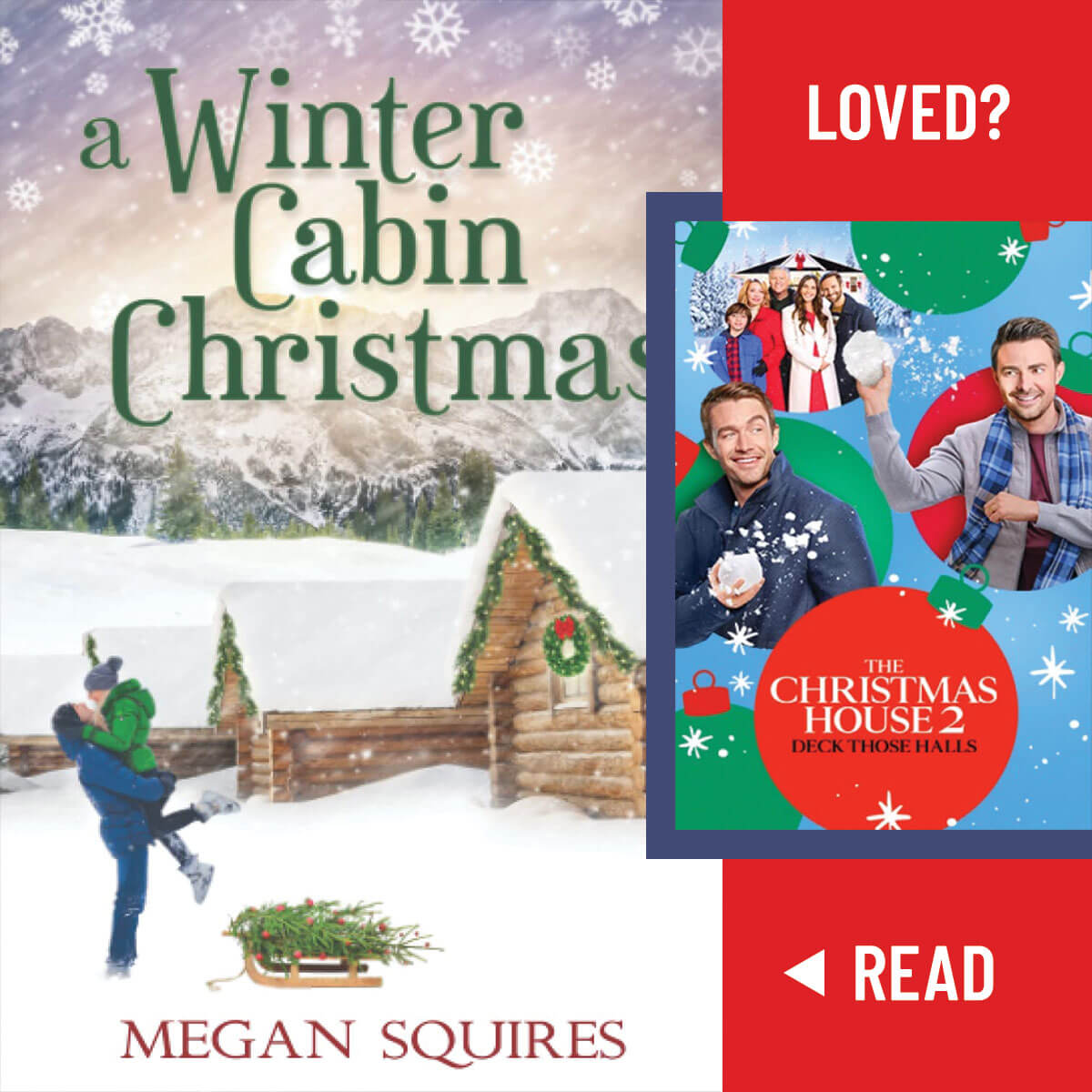 If you enjoyed watching The Christmas House 2: Deck Those Halls, you’ll want to read A Winter Cabin Christmas by Megan Squires. Talent agent Samantha Day is beyond excited to cast her parents as Mr. & Mrs. Claus for this year’s festival in Cedar Crest. Unfortunately, she’s faced with a dilemma when she learns that their spots aren’t guaranteed. As she works alongside Noah, she realizes that he has his own set of problems as he’s trying to save his family’s cabin business from going under. While these two are getting closer, they wonder if they are getting further away from saving Christmas this year. 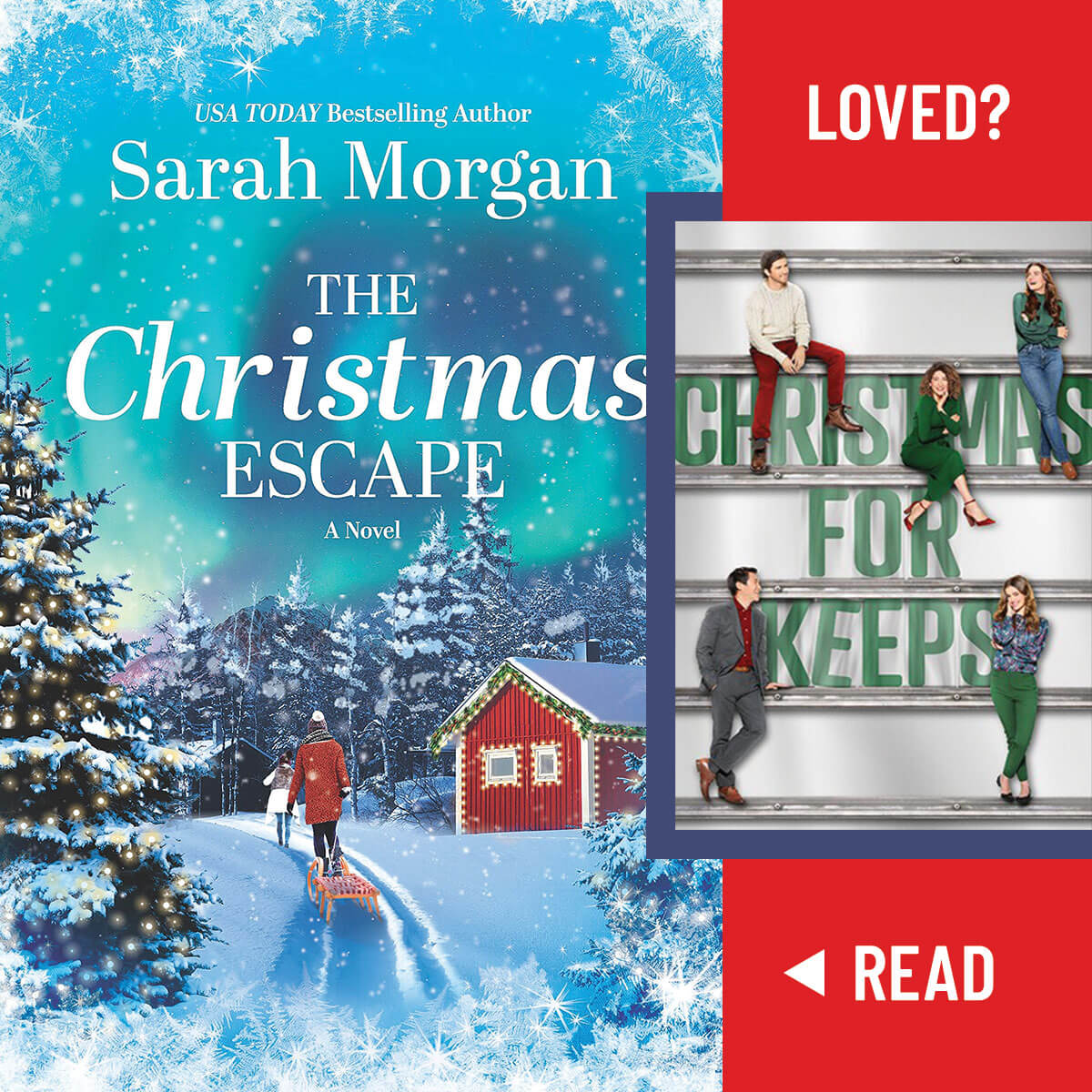 Once you stream Christmas For Keeps, you’ll want to read The Christmas Escape by Sarah Morgan. Christy was ready to get away from it all this Christmas with family and best friend, Alix. But with Christy’s marriage on the rocks, she feels it’s best to stay behind. Instead, she proposes that Alix take her daughter, along with her husband’s friend, Zac on the trip. But Zac and Alix have history and secrets to reveal, which makes things even more complicated. Will this Christmas bring on be the renewal of relationships or the destruction of families and friendships? 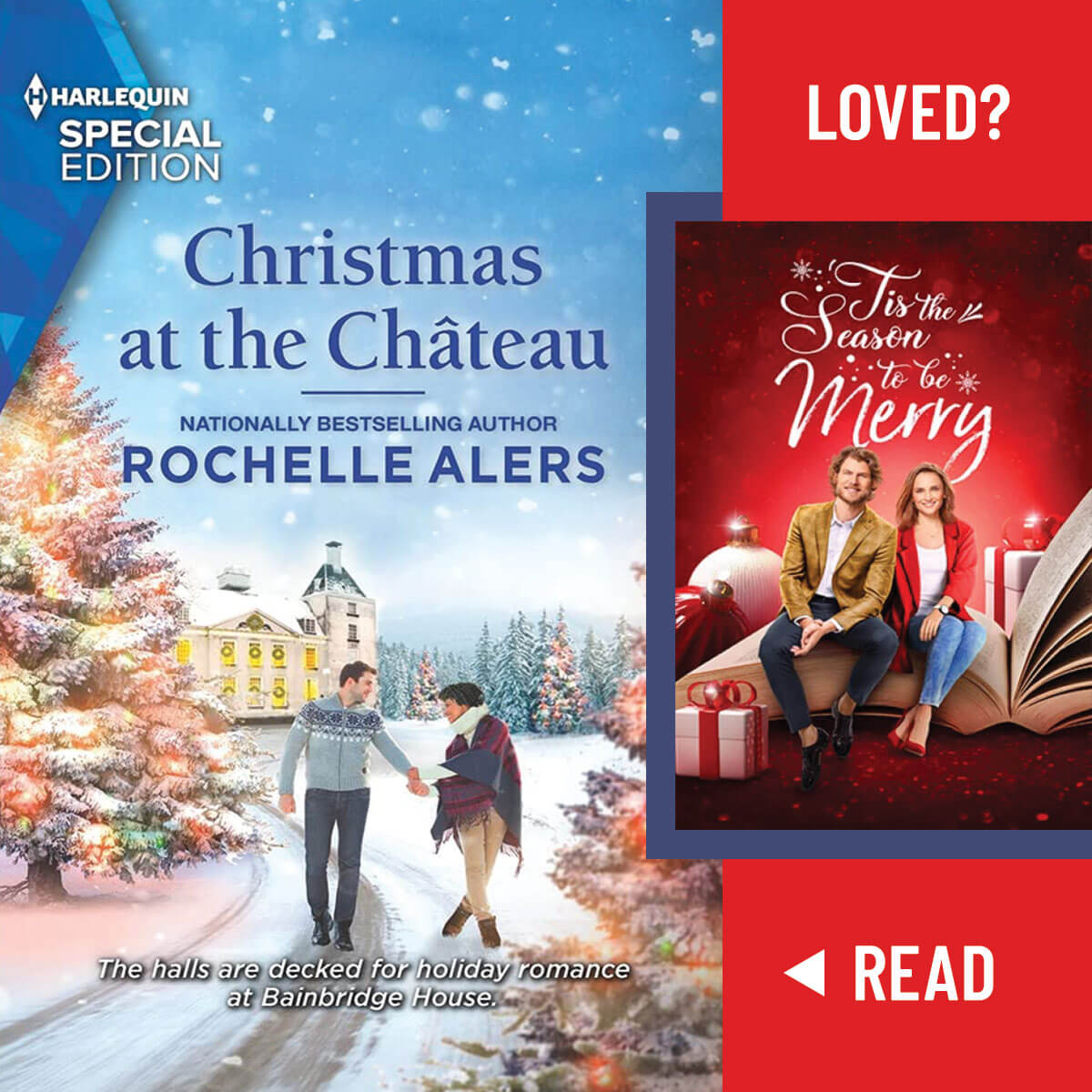 If you liked ‘Tis the Season to be Merry, you’ll love Christmas at the Château by Rochelle Alers. It wouldn’t be a proper holiday dinner without a serving of romance. Viola Williamson is an extraordinary chef who is up for the challenge to have the Bainbridge House kitchen fully functioning by the time that renovations are complete. But she wasn’t expected to be distracted by Don Shaw, the gorgeous caretaker of the estate. Even though Don seems to be all business, Viola is determined to add a bit of pleasure to the mix this Christmas.