This dark bewitching YA novel by S. Isabelle is ideal to curl up with this summer—but that doesn’t mean readers are escaping any heat. Based at a Florida coven academy, The Witchery follows four witches—Logan, the newest witch, has just arrived at the academy in Haelsford, and is taken under the wing of the Red Three: Jailah, fighting her thirst for power; deathwitch Iris, trying to break the town’s curse; and greenwitch Thalia, running from a haunting past and her religious family.  It’s Haunting Season, and the witchy girls are preparing to protect the town of Haelsford from the seasonal onslaught of bloodthirsty wolves. But this means humans and witches must work together, despite a bloody history and barely there truce. But when two boys cross paths with the witches to ask for protection via sacrifice, students start turning up dead, and Iris, Thalia, Logan and Jailah will have to harness their power and stop the Wolves, at costs greater than they can imagine.

Told in a six-person POV, The Witchery a thrilling, delicious read that fans of The Craft and Vampire Academy.

Read on for our exclusive interview with author S.Isabelle on creating friendship-focused fantasy, magical schools for teens, and how she gets inspired. 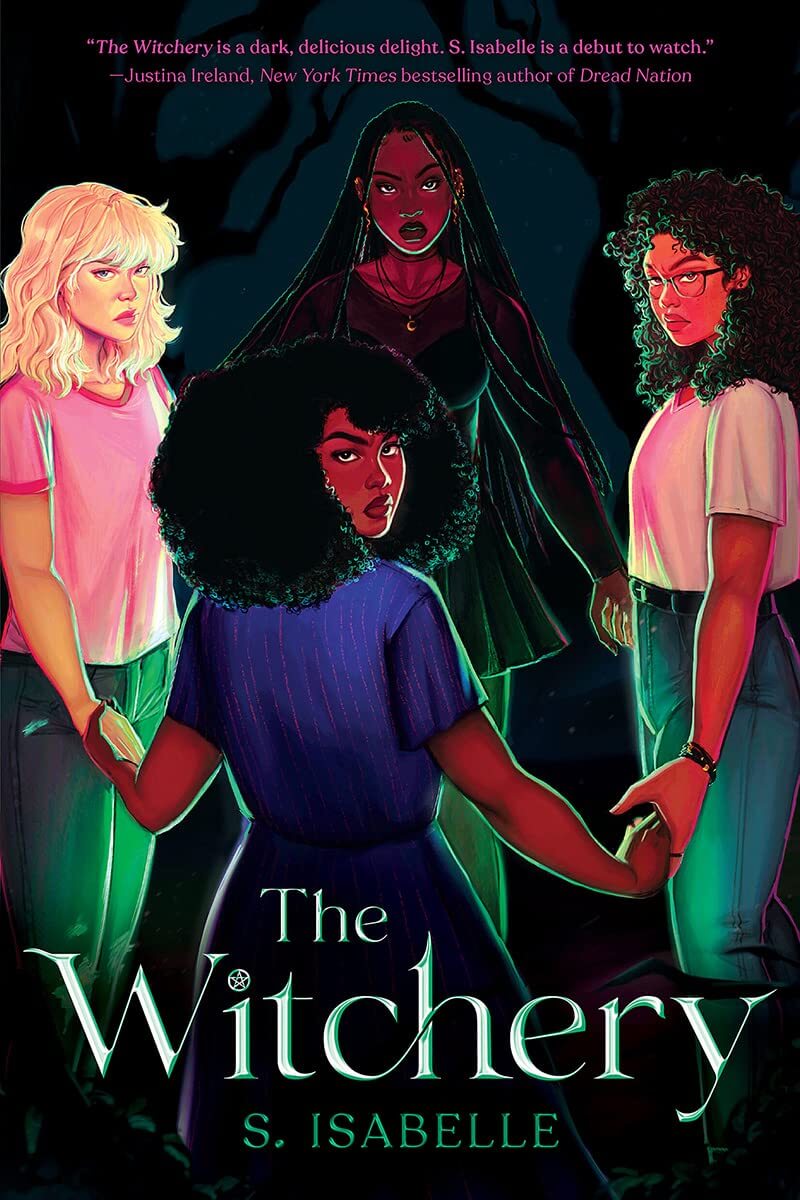 What inspired The Witchery?

Fantasy books are what made me a reader. I read all genres these days, but I’ve found that there is nothing like the mix of magic and high stakes in a book, and the idea that magic is just around the corner or behind an enchanted door. I was also inspired by stories like True Blood, where the supernatural world is known about, and exists alongside the mundane out in the open.

The Witchery is full of my favorite fantasy tropes. I love ensemble casts, I love when magic goes totally wrong and the consequences are catastrophic. There are touches of romance in The Witchery as well, but I wanted to write a YA fantasy focused on friendships, and what it means to find your family in a place so far away from your actual home.

Was there a specific POV out of the six that you related to the most? The least?

There’s probably a little bit of me in every character, honestly. I think I’m closest to a mix of Thalia and Trent. Thalia is quiet and introspective, and wants to protect herself and her feelings from others, while Trent is the soft, smiley boy who knows how to have a good time. They’re such opposites, so I loved writing their scenes together.

I think I’m least like Logan. She’s still figuring things out—both in her newfound magic and just as a teen growing up—and I had her make some cringey decisions that will likely have readers shaking their heads! She’s coming from this very privileged background, and it was sometimes difficult to get into a mindset that I couldn’t really relate to.

How did you go about building this fantasy world?

I wanted this world to feel magical, but grounded. I’ve always been a huge fan of paranormal stories, those worlds that feel like ours, but have that fantastical element. The magic here is fairly simple, and I hope that teens who don’t usually gravitate toward fantasy enjoy this book as much as avid fantasy fans.

In The Witchery, witches are part of everyday life. They have their own governing body and their own laws. When it came time to create the coven academy that the characters attend, I thought a lot about what a magical school in the U.S. would look like. If witches were real and known about, how would these institutions teach magic? What spells would teen witches in Florida be allowed to learn? We all know that so much of history gets lost or intentionally omitted in classrooms around the country, and that was something that shaped the magic system and the educational lessons the characters learn. I can’t say too much about what happens after the book ends, but one thing I’d like to do in the future is deconstruct the magic school trope. I’d love for my cast to meet self-taught witches, and those who have learned magic from their families and their cultures.

When I was first drafting this story, I saw it as a paranormal or contemporary fantasy novel than a horror novel, but during the editing process, I found myself really leaning into those horror elements. I’m that person who watches scary movies between my fingers, so that was a surprise that I genuinely had a lot of fun with.

The Witchery brings LGBTQA+ and BIPOC characters to the forefront, helping readers see themselves in the stories they read and grow to love. What are your thoughts—or even fears—about the current state of representation in literature?

A phrase that has long been talked up and championed is “Representation Matters.” And I agree, but that really should be just the first part of the conversation. It’s not enough to have one or two Black authors on your roster every season, or only publishing queer authors that are white, or to have a few books with characters of color on the covers when the authors aren’t BIPOC themselves. Authors of color deserve to write their authentic narratives without having to satisfy overwhelmingly white execs at traditional publishing houses. There’s so much classism in the industry as well. Publishing needs marginalized voices in all facets of the industry, from agents to publishing executives. Acquiring our books isn’t enough—top down support is necessary. I’d also like to see more love for marginalized indie authors. I’ve made a goal of reading indie authors more widely now and in the future.

I hope teen readers feel like they were able to escape the real world, even if just for a few hours. I want them to feel like it’s okay to make mistakes when navigating new and old friendships, and to feel seen in the characters of this book.

I love to pick up books by my favorite authors, and just flip through them to take in my favorite scenes. I do the same with craft books, picking them apart for the advice I need to push through when I’m feeling uninspired. I also think TV and movies are a great way to refill that creative well and get inspired.

Can’t say much, but I’m not quite done with the witches of Haelsford just yet…