Our November Guest Editor Jodi Picoult on Wish You Were Here

Our November Guest Editor Jodi Picoult on Wish You Were Here

There are some writers who just have a knack for writing about resilience and the human spirit—especially in moments of crises. Jodi Picoult is one of those writers.

Her research is meticulous, from exploring bone marrow transplants for the Perfect Match; ghost hunting for Second Glance; spending time in a hardcore Arizona jail for Vanishing Acts; trekking the Alaskan tundra for the The Tenth Circle; working with elephant researchers in Botswana for Leaving Time; shadowing an abortion provider and interviewing over a hundred woman who were pro-life and anti-abortion for A Spark of Light; or spending time with a man who lived with a wolf pack for year for Lone Wolf.

And of course, she also knows about persistence: She’s written almost 30 books, has three kids, writes every day, and claims it literally takes nine months to birth a book.

So we shouldn’t be surprised that this #1 New York Times best-selling author has written a deeply moving novel about plowing through darkness to find the light—in a pandemic. In fact, she is THE first major author to have a book about the pandemic hit stores.

In Wish You Were Here, Diana O’Toole has the perfect game plan: Married by thirty, kids by thirty-five, climb the professional latter in the art auction world while also moving to the NYC suburbs. She seems close to these goals; as a Sotheby’s associate specialist, she’s been promised a promotion—as long as she can close a high-profile deal. She’s sure her boyfriend is going to propose on an upcoming romantic Galapagos trip—the dreamy place of where Darwin’s theory of natural selection was formed—right before her 30th birthday. But then, a pandemic hits. Her boyfriend Finn has to stay and work at the hospital, but encourages her to go on the nonrefundable trip. At first, it seems like a big mistake: her luggage is lost, the Wi-Fi sucks, and the hotel and island are all but shut down due to the pandemic quarantine. Stranded until borders reopen, she explores a surprising connection with a local family, nature, and stepping out of her comfort zone.  Now, examining herself and her choices, she wonders if the same island that formed Darwin’s theory will also have her evolving into someone completely different.

As our November guest editor, we talked with Jodi Picoult about what she learned during the pandemic, Wish You Were Here’s forthcoming adaptation, being in “the banned books club,” and what she’s currently reading. 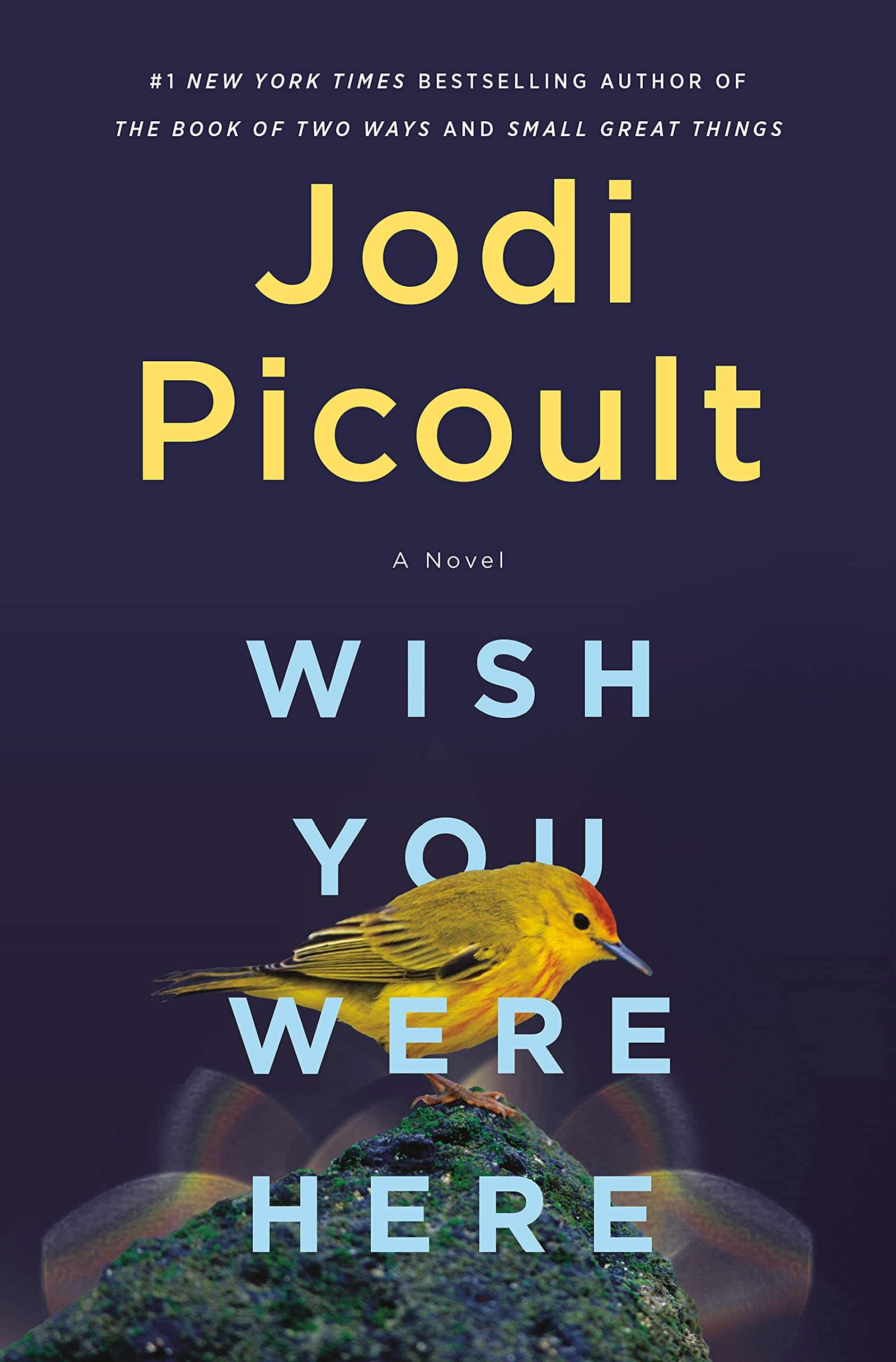 How does it feel to be one of the first major novelists to have a pandemic book hit stores?

Well, it’s a dubious distinction, isn’t it?  On one hand I feel like it’s the responsibility of authors to make sense of a time that is so overwhelming.  On the other hand, I wish I’d never had to write this book — and that none of us knew the word Covid.

The pandemic seems far from over, with society feeling now, more than ever the pandemic burnout and depression over just “Not knowing” what’s going to happen next. That has to be hard to write an ending to a novel when you weren’t sure yourself, right?

When I wrote the book in November 2020, we knew vaccines were coming, but they weren’t here yet.  I was still on strict lockdown, because of my asthma.  I do feel that in 2021 we are in a different place – thank you science!!  But we are still definitely in the midst of a pandemic, and so writing the end was definitely aspirational. I wanted to believe that one day, this will be a memory and will feel very far away.  So I created that on the page.

You’ve said that you wondered while writing about what the world will have learned about this pandemic. What did you learn, and what do you think is one of the most important things that hopefully others have learned?

First, I learned that it’s okay to grieve.  We all lost SOMETHING during the pandemic, and we can acknowledge that loss.  Second, I learned that I’m a control freak and that I do not do well when I cannot engineer a solution to a problem.  I think we all learned that the high-water marks of success, as we had once defined them, turned out to not be so important.  Prior to 2020 I would have said that success was measured in a title, a job promotion, a salary increase, a degree.  But in 2020 success meant being healthy.  Having a roof over your head.  Having food.  Having the privilege of holding the hand of someone you love when they’re dying.  Now, as we move forward, I hope we all can remember that and refocus our priorities.

What’s one of your favorite scenes in Wish You Were Here?

Congrats on the news that Netflix is adapting Wish You Were Here! For you, what’s the most stressful part about having your work adapted to the screen?

Having had really bad adaptations made (hello, My Sister’s Keeper!) I think what I want most is to know that the people who adapt the film are using the book as a blueprint for the story, instead of recreating the wheel.  The team that has been amassed so far is a bunch of really smart, strong women producers and executives who seem to have the same idea that I do when it comes to telling Diana’s story.

My Sister’s Keeper is one of the most often banned books, according to the American Library Association. How does this make you feel, especially with all the recent news about these massive book bannings?

It’s a pretty heady club to be in.  As authors we all know that the fastest way to get a kid to read your book is to have it banned.  But that said, telling someone what they should or should not read is a very slippery slope. The racist and homophobic and misogynist leanings right now by politicians in Texas and Virginia and elsewhere who are trying to ban books are, frankly, vile.  Representation matters in literature, and kids should get to see themselves on pages.

What are you reading right now?

The Book of Magic by Alice Hoffman

You start your next book the second you finish your last. So, what’s next?

Well, I’m actually two books ahead.  My 2022 book, co-written with Jenny Boylan, is called Mad Honey and it’s already in production at the publisher.  And I’m doing research for 2024.