10 Book Recs from the #LatinxBookstagramTour

10 Book Recs from the #LatinxBookstagramTour

When I first created an Instagram account dedicated to blogging about books, I primarily did it to find community. I wanted to connect with readers out there searching for someone to discuss books with. As I spent more time cultivating my own online community and presence I noticed that the majority of accounts on #Bookstagram are run by white women, mainly reading and recommending books by white authors.

While I appreciated finding a community of book lovers, I found myself feeling lonely. I craved to connect with readers like me and to read/discover more books written by Latinx authors. I craved representation; not only in a book but in the #Bookstagram community. So (almost) four years ago I was struck with the idea to create a “tour” that would amplify Latinx Bookstagrammers/Readers/Legends and their favorite Latinx books to celebrate Latinx Heritage Month (September 15th – October 15th). This idea has so far resulted in 1.1K posts under the hashtag #LatinxBookstagramTour, amazing #ownvoices Latinx book reviews and most importantly a space for Latinx readers to discuss what Latinx literature means to them. My hope is the tour will continue on as long as Instagram lives and well beyond that!

With that in mind here is a Latinx-required reading list spanning the three years the Latinx Bookstagram Tour has existed. Before we jump in, make sure you follow @thesolreader and @readingwithnani, who will be hosting the 2021 tour for more amazing Latinx book recommendations. 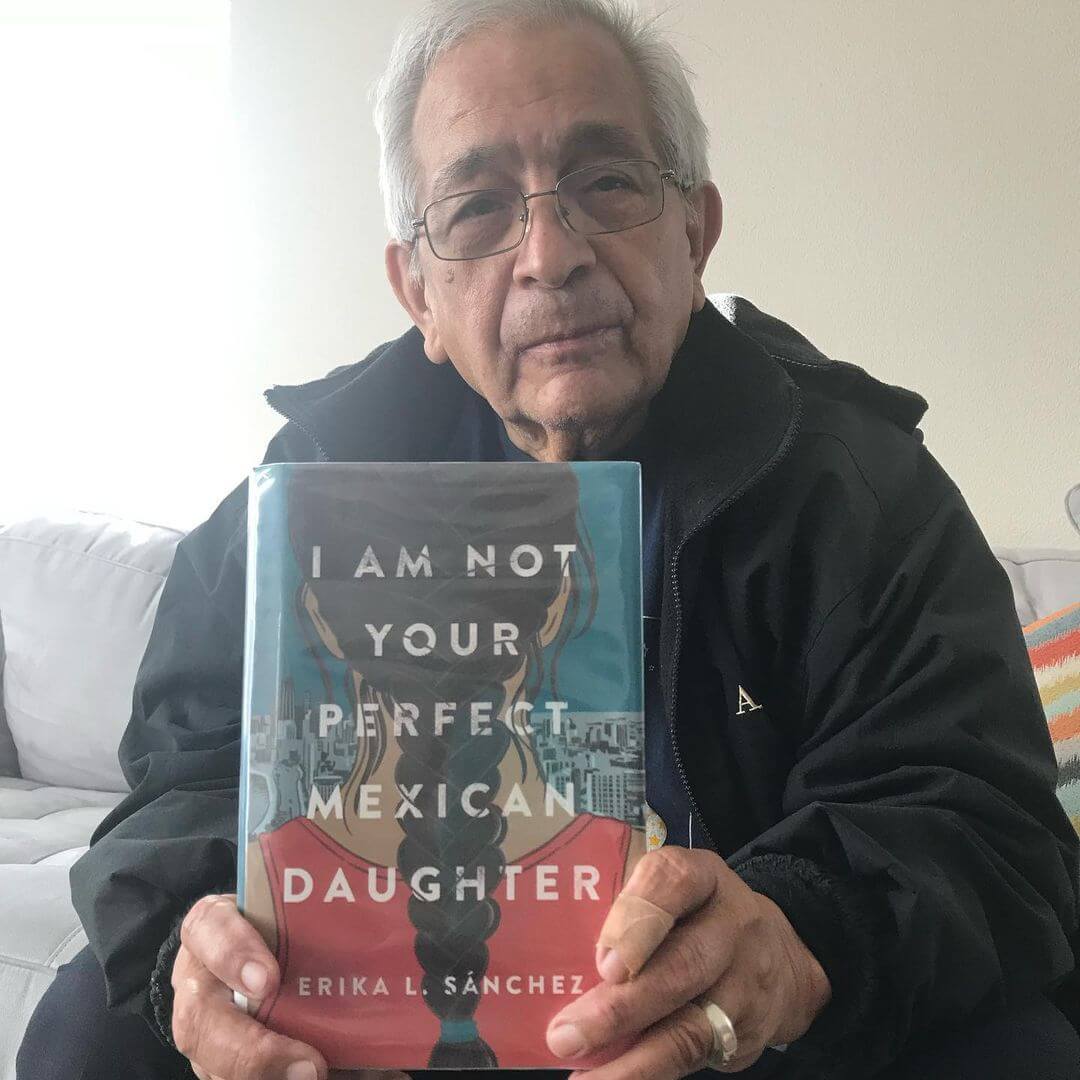 I Am Not Your Perfect Mexican Daughter by Erika L. Sánchez

When Candance from @ace.of.pages recommended I Am Not Your Perfect Mexican Daughter in her thoughtful post featuring her father and their relationship, it cracked my heart open for so many reasons. Sánchez’s young adult novel covers a Mexican-American teen who has tragically lost her “perfect” sister. She’s left with her grief and that of her parents who both have found different ways to display it – by being hard on her or pretending she doesn’t exist. As Candance outlines in her very thoughtful post, so much about what matters in parenthood isn’t what you understand about your child, but the ways in which you are willing to listen and support them. Knowing that Candance and her father were able to share and connect to each other over this story about a teenage girl struggling to be seen makes it a book I recommend often to anyone of any age. Click here to see her full post. 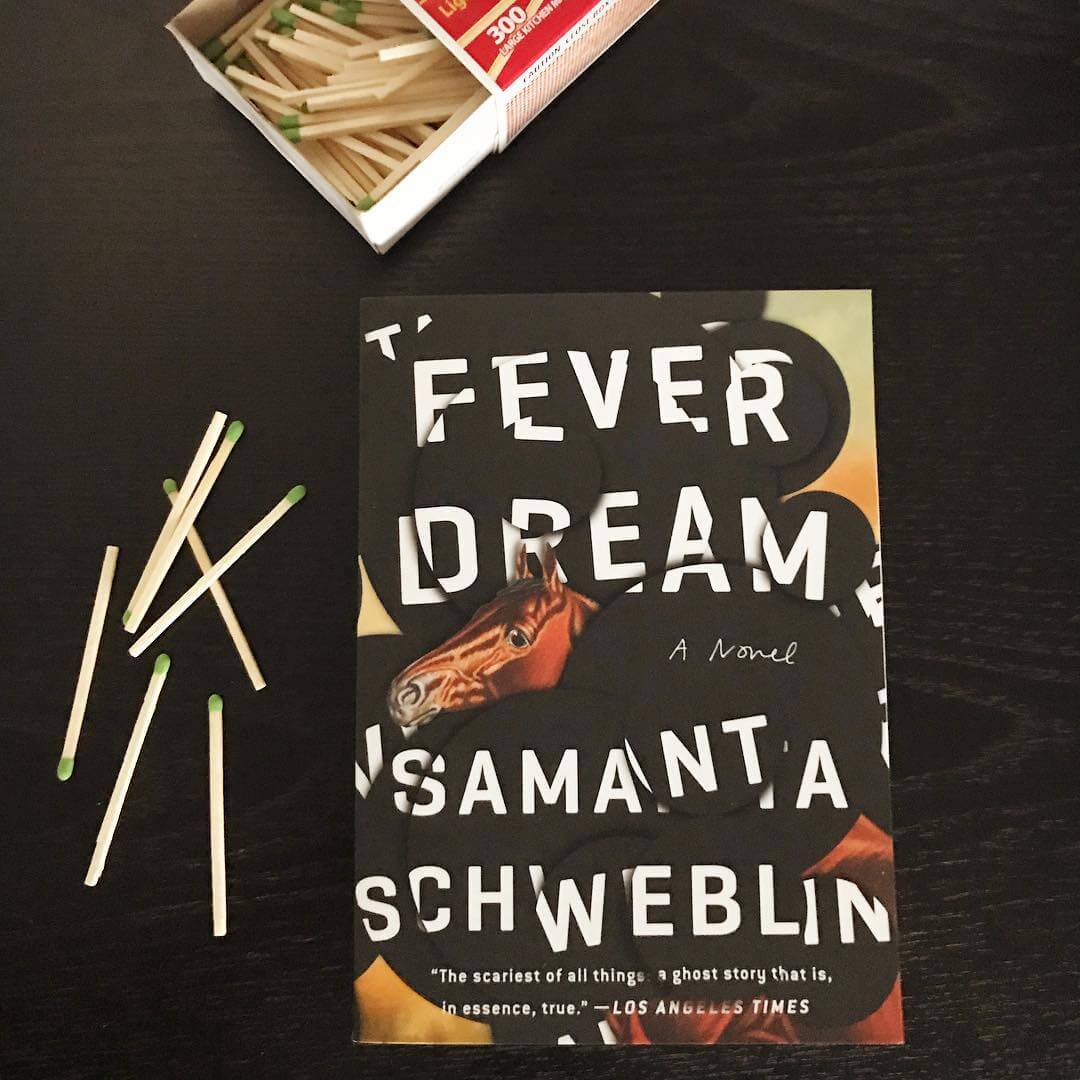 Irene’s from @Read.Rewind tour spot illuminated the fact that I needed to be more intentional about supporting Latinx authors across different genres. Fever Dream, listed as horror fiction, is a book I never thought I’d pick up until Irene’s post. As soon as I started this short and deeply consuming book I could not stop thinking about it.  Translated into English, the novel opens with a woman dying in an unknown hospital while a boy named David whispers into her ear the story of her undoing; the ways in which she fails her child by bringing them to this strange village with this strange boy named David. There’s so much more I want to say about this novel but I’d spoil that ending so READ IT and click here to read Irene’s (spoiler free) full post. 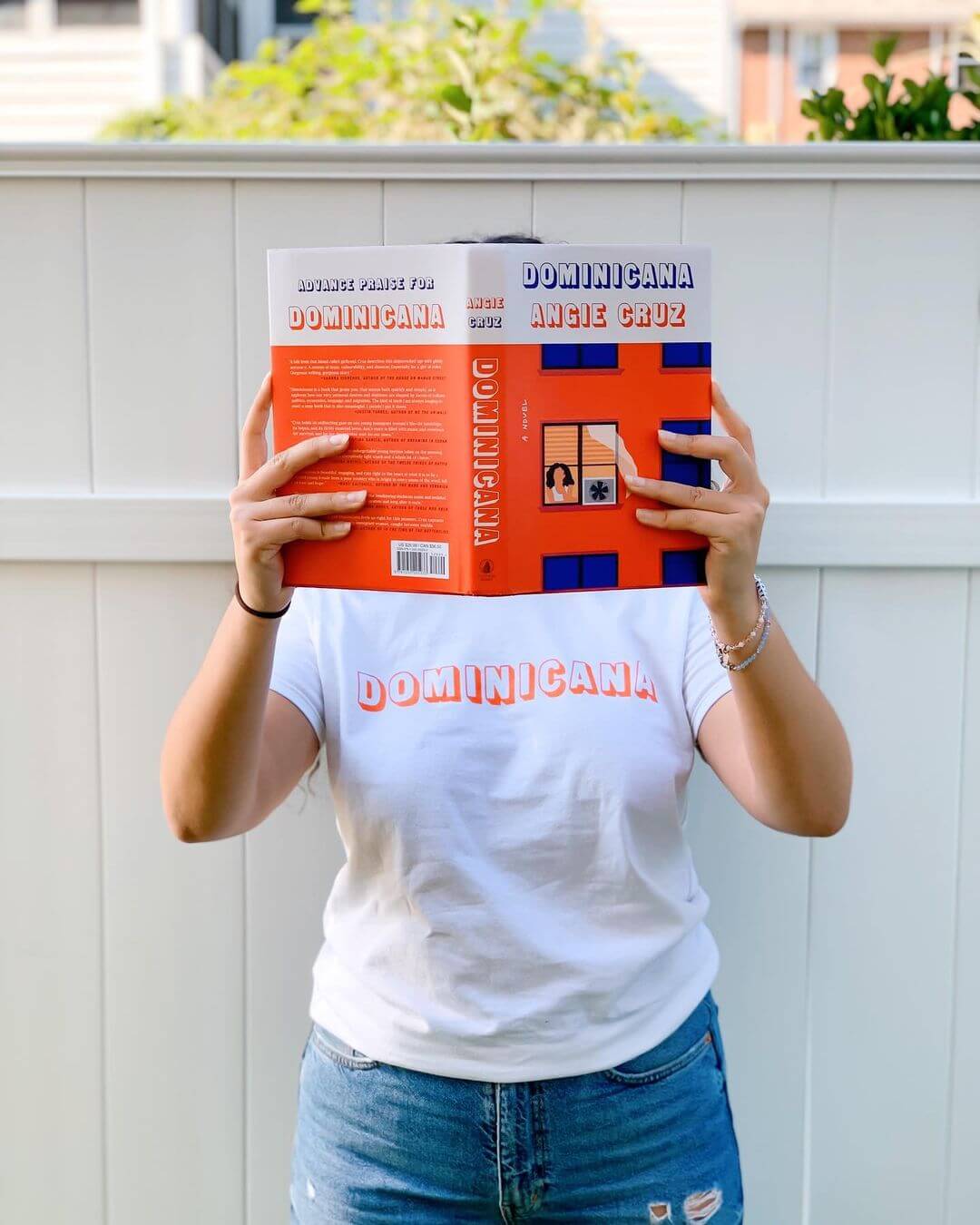 Anabel from @inthebookcorner wrote about the very special experience of feeling at home in a book. How connected she felt to Ana, the main character’s world in the novel. Set in the 1960s traveling from Dominican Republic to New York City, this novel follows Ana Cancion, a bright and hopeful 15 year old in the Dominican Republic, on her journey to self-discovery after her family forces her to marry a 32 year old traveling to the U.S. in hopes the family will all eventually end up together in the U.S. A hopeful story that, as Anabel points out, feels so familiar it could be the story of one of my own aunts, this a must read ode to them. Click here to see Anabel’s full post. 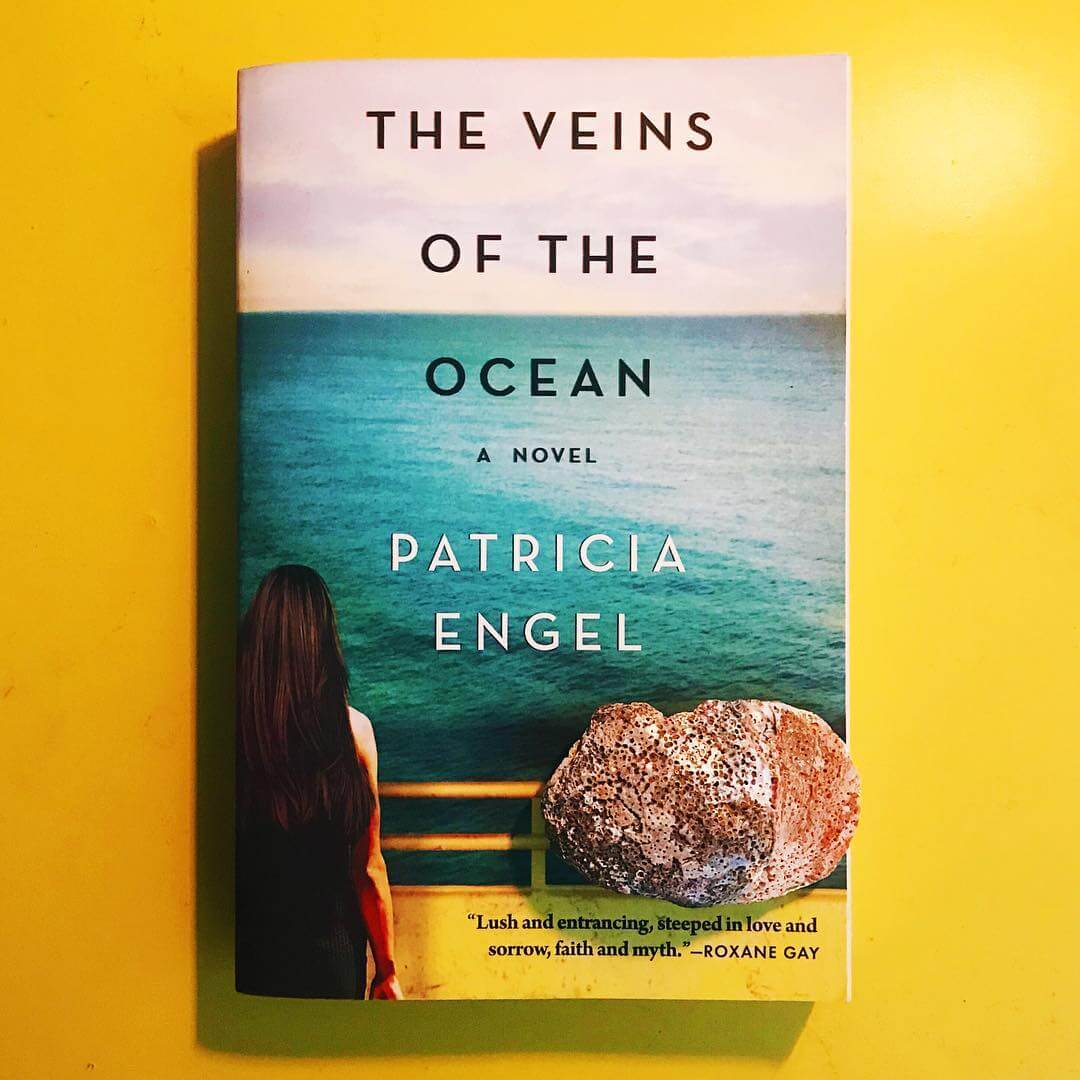 The Veins of the Ocean by Patricia Engel

When I DMed Ingrid Rojas Contreras, author of Fruit of the Drunken Tree (one of my favorite novels), to ask if she might want to participate in the tour I waited by my phone refreshing my DMs like its all that existed in the world. And when she responded YES, I jumped with so much joy! Fast forward to her post for the tour, which made me immediately buy a copy of this novel and later weep. It’s truly one of my favorite memories of the tour. Rojas Contreras highlights the depth of Engel’s writing, and Engel’s beautiful ability to remind us of how connected we are to earth and the animal kingdom. The Veins of the Ocean follows Reina Castillo, who is dealing with the grief from losing her brother to a death sentence for the murder of a child. Fleeing the community that once embraced her, she finds herself meeting Nesto Cadena, who teaches her what can be taken, healed and restored by the ocean. Click here to read Ingrid’s full post. 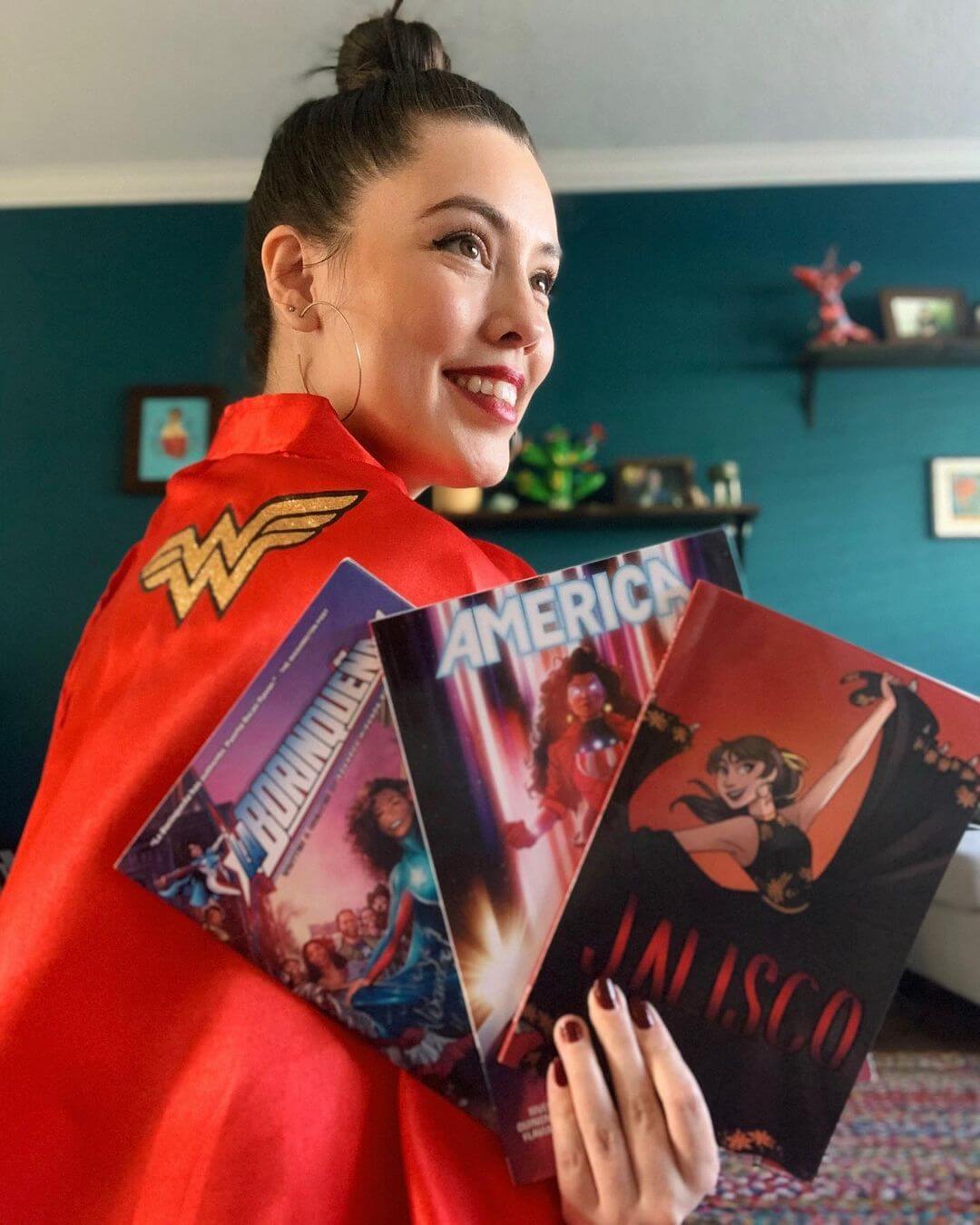 For Traviesa Reading Club’s tour stop she wrote about the recent boom in Latinx representation in the comic genre space—but most importantly she talks about growing up with real superheroes (her siblings) and their very real super powers (their “intergenerational unwavering spirit” despite the “general systemic xenophobia” they face daily). Her post is a reminder to all of us that we are superheroes and like America Chavez we are all on our own intergalactic journey to figuring that out. Reading about this queer crime-fighting Latina with two mothers is more than a requirement—it’s necessary! Click here to read Traviesa Reading Club’s full post. 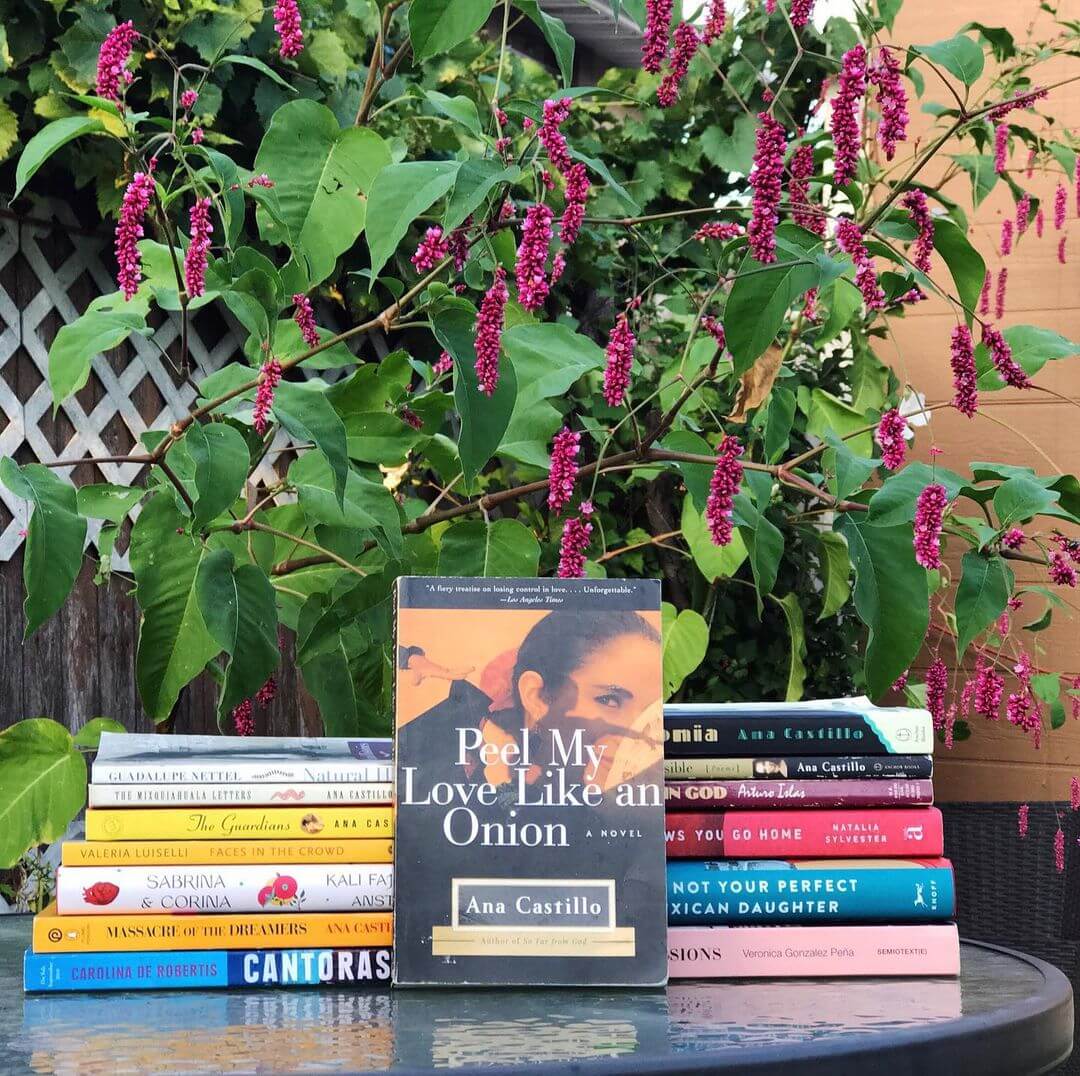 Peel My Love an Onion by Ana Castillo

Karen from @idleutopia_reads writes about the very real experience of straddling two countries (Mexico and the US) and being forced to claim one over the other, simply because of where you were born. Ana Castillo’s Peel My Love Like an Onion changed all that for her—and for me as well. Knowing it’s possible to exist as both Mexican and American, Castillo’s characters/stories are rooted in both cultures and countries, as well as often feature characters that don’t fit one mold or another. Carmen Santos, the main character in Peel My Love Like an Onion, and her tale of finding a space in the work of flamenco despite her disability demonstrates how you don’t need to be one specific thing to thrive – you can be everything at once and live boldly. Click here to read Karen’s full post. 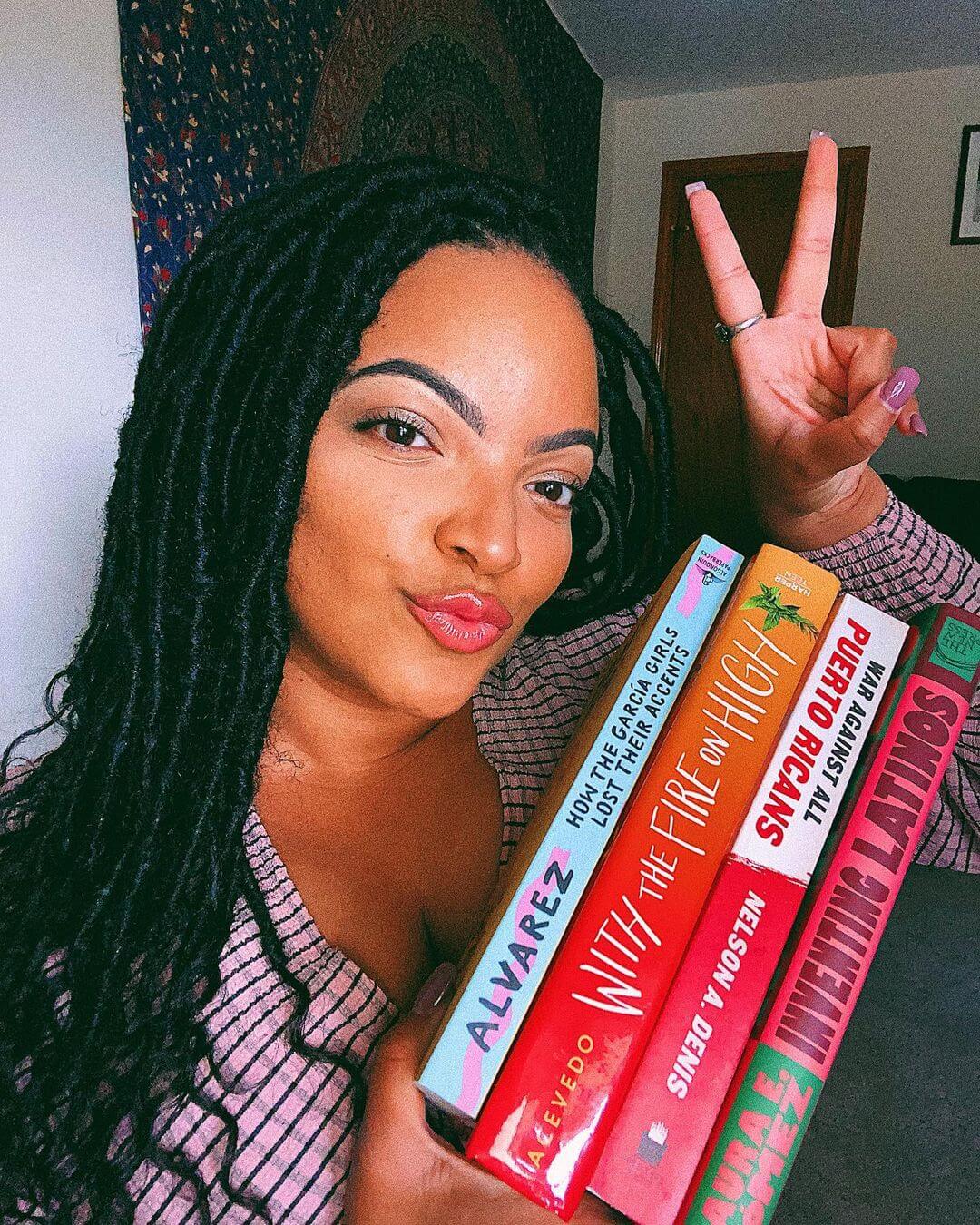 With The Fire on High by Elizabeth Acevedo

Kim from @afrobookriua wrote about the comments she received growing up half Latina and half Black—while being told there was no way she could be Latina because she didn’t look it and doesn’t speak Spanish. Her words hit on how racism and colorism within the Latinx community consistently causes pain and erasure. I felt her words so deeply when thinking of her recommendation to read With The Fire on High, a young adult novel featuring Emoni Santiago, an Afro-Latina high school teenager fighting the stigmatization of being a teen mother. Emoni knows she is capable of so much more than her family and friends give her credit for, and what she especially knows is that she is capable of persevering to make her dreams of becoming a chef come true. Click here to read Kim’s full post. 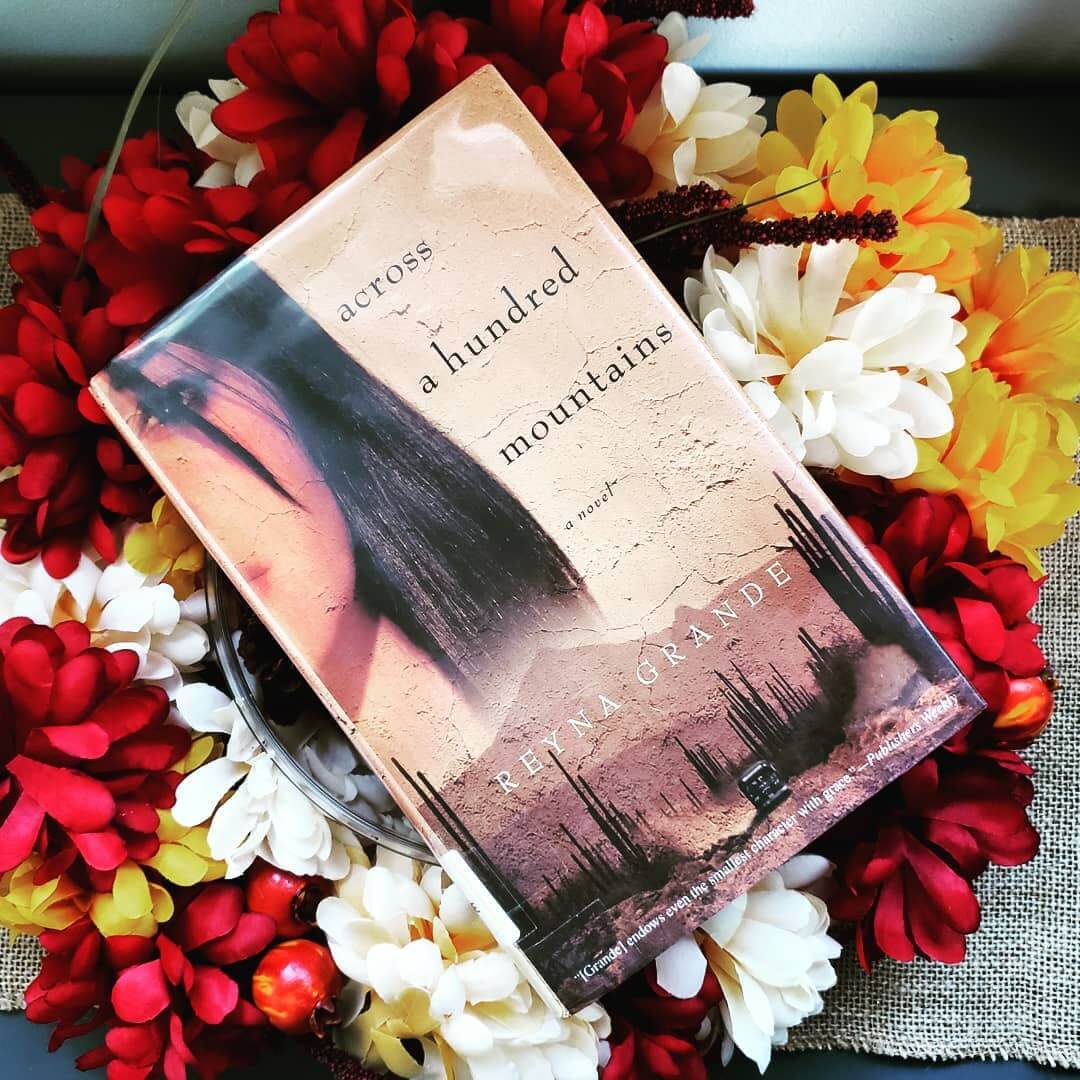 Across A Hundred Mountains by Reyna Grande

Ruth from @latinabookworm featured a novel from a #ownvoices author depicting the realities and reasons behind why some decide to cross man-made borders. Grande depicts the huge risks and the pain inflicted on those left behind. In Ruth’s tour stop post about this book she touches on how important it was for her to read about these realities and reasons. Click here to read Ruth’s full post. 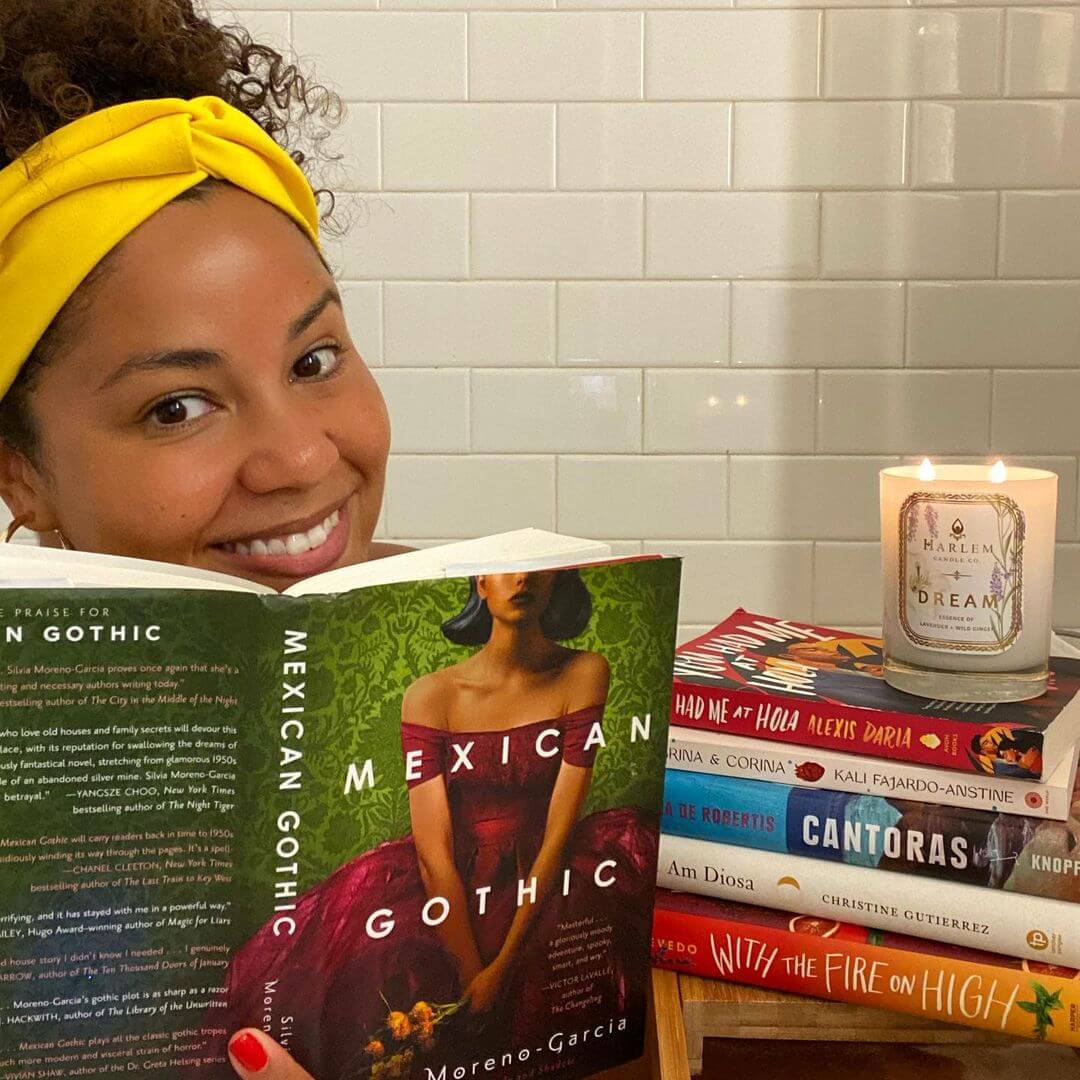 Arianna Davis, author of What Would Frida DO?: A Guide to Living Boldly, shared a stack of books for her tour stop in 2019, and from that stack a book we both connected to was Sabrina & Corina. The short story collection features Latinas with deep indigenious roots in Colorado in a way I wish we would see more of in literature. It covers themes of  friendship, relationships, generation trauma, loss, grief and so much more. Click here to read Arianna’s full post. 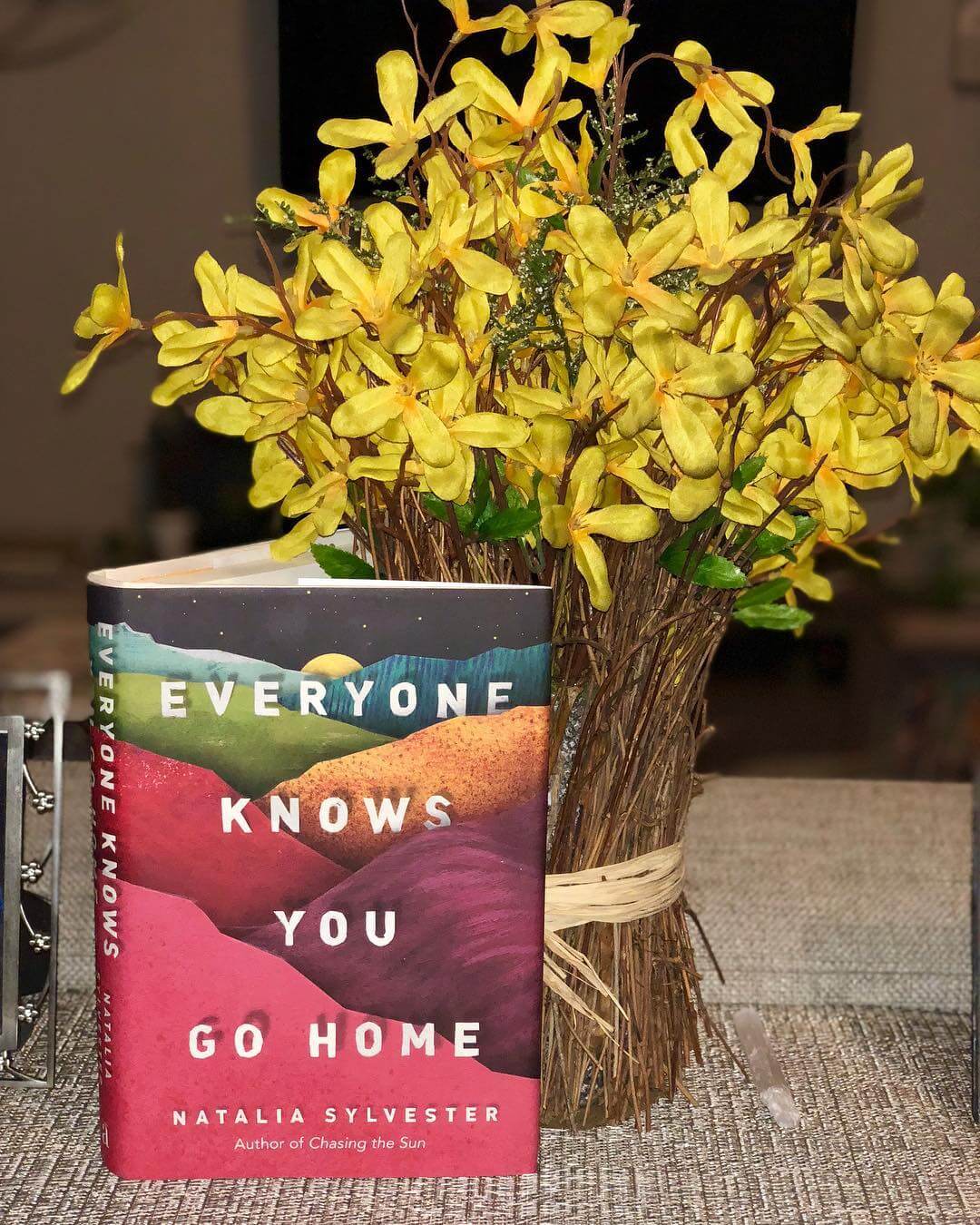 Everyone Knows You Go Home by Natalia Sylvester

For @niaitathomas tour stop she recommended a book that begins with a bride meeting her dead father-in-law on her wedding day for the first time. His ghost-like appearance is seeking redemption for having disappeared from his family years ago, and while her husband had no idea his father died, his ghost continues to return to the bride year after year on el dia de los muertos (the day of the dead). Though that might sound strange and “spooky” read , it’s more about the weight of grief and the deep psychological damage man-made borders can inflict on families. Not only the way it separates them, but the ways in which it can cause ripples of unresolved grief/trauma throughout generations. Click here to read Nia’s full post.