Liane Moriarty has been a favorite storyteller of mine since I binge-read Big Little Lies. Her writing is cinematic and her characters really build the story. No one does domestic drama like Liane Moriarty, and her upcoming release Apples Never Fall is a prime example on how captivating her stories can be.

Apples Never Fall is about the Delaney family, led by Stan and Joy, who recently sold their tennis academy and are ready to start living the blissful retired life when Joy goes missing and Stan is the prime suspect. The four Delaney children – Amy, Logan, Troy and Brooke – also famous tennis stars, all want to believe their father is innocent. Told in alternate timelines, Moriarty perfectly weaves together storylines that meet effortlessly. Prior to Joy’s disappearance, a young woman named Savannah shows up to their house after a fight with her boyfriend and Joy and Stan take her in. After Joy’s disappearance, the Delaney kids try to put the pieces together and wonder if this mystery woman had something to do with their mother’s disappearance. This is the perfect blend of a character-driven domestic drama that is sprinkled with mystery. Again, Moriarty brings in minor characters who can provide tidbits of information from their perspective of this family that only makes the book more impossible to put down. Fans of Big Little Lies will not be disappointed with this one when it comes out on 9/14!

Again, this is another Moriarty story that would be amazing if adapted. You can almost see these characters interacting with one another and smell the fresh air that flows through this peaceful community. I would love to see this one as a miniseries and it all began with Joy Delaney. The minute I met her in this book, I dreamt an ensemble cast that I would love to see take on these characters. Here are my choices: 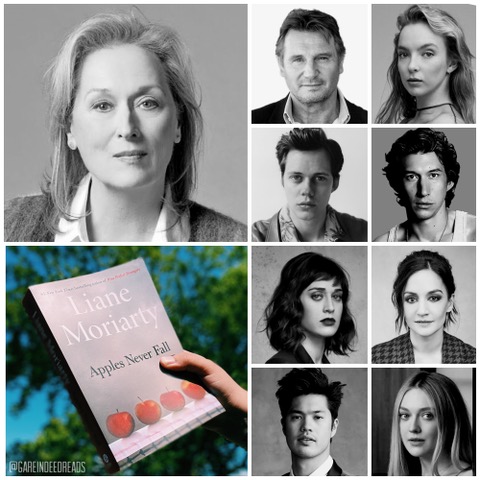 Joy Delaney – Joy is the matriarch of the Delaney family and her character has such depth that only one person came to mind: Meryl Streep. As I read about Joy and I saw her interactions with different family members and other characters, I knew that only Meryl could pull off the range of emotion and she would nail a few key scenes that steal the spotlight.

Stan Delaney – Stan is described as this really tall and muscular man who is a little intimidating and also protective of his family. As soon as I started to read him, I was going back and forth with different choices until his character spoke and all I heard was Liam Neeson’s voice in my head and the lightbulb went off. Neeson has this charm about him, but can really intimidate an audience and he would play Stan perfectly in those moments where you wonder if he is or is not responsible for Joy’s disappearance.

Brooke Delaney – Brooke is my favorite of the Delaney children. I found her character to be so much fun to read and she was mesmerizing on the pages. When it comes to casting siblings, it can be tough as you want people who look similar but can also pull off the character they are playing. I believed Brooke to be a mini-Joy and I immediately thought of Jodie Comer as I think she looks similar to a young Meryl and as I kept reading, she was the only choice for my favorite character!

Troy Delaney – Troy is the good-looking, charming and well put-together of the Delaney boys, and while his character can be a bit cold at times, he’s also somewhat the voice of reason. I kind of read him as a mini-Stan and as the book progressed, I immediately pictured the suave Bill Skarsgard as Troy. I think he could pull this character off effortlessly and I would love to see him bring Troy to life on the screen.

Logan Delaney – Logan is described in a scene as being the brother who is almost as good looking as Troy, almost as in-shape, but a little rough around the edges. With Logan’s storyline and his interactions with his siblings and parents, I thought Adam Driver would be the perfect fit. Adam is charming in this offbeat sort of way and can pull off so many emotions with his acting.

Amy Delaney – Amy is the blue-haired oldest sibling who is a bit of a mess and has this fly-by-the-seat-of-her-pants lifestyle, but is kind at heart. I wanted someone who is edgy and could really sell the intricate character that Amy is. From her work on Mean Girls and Truth Be Told, I thought that Lizzy Caplan would be the perfect fit for Amy. She is edgy and very chameleon-like with the characters she plays. While Amy was the hardest to cast for this book, I really can’t picture anyone other than Lizzy playing her!

Christina Khoury – Christina is the lead detective that is investigating the disappearance of Joy Delaney and I loved this character so much. You got a feel for who she was outside of being a detective and the contrast with her personal life and her profession was fantastic. I wanted someone who could have a good range of emotions but also play that cold investigative role and soon enough, I started to picture Archie Panjabi as Christina and the rest is history!

Ethan Lim – Ethan is Christina’s partner and he is a bit younger than she is and still kind of seems newer to the job than her. I wanted someone who was recognizable and could pull off a relatively innocent character that is relatable and could balance those scenes with Christina well. As I read more of Ethan, I eventually thought of Ross Butler. I’ve enjoyed him in everything I’ve seen him in and I think he would be the best Ethan Lim.

Savannah – Savannah is one of the most important characters outside of Joy and Stan. Sorry, Delaney kids, but this mystery guest that finds herself in the middle of the drama between all of these characters took me in so many different directions. Moriarty did a great job of making this character vivid, but also going back and forth with wondering if she was good or bad. I wanted someone very recognizable who could play someone who is either a hero or a villain and thought Dakota Fanning would be fantastic. She has that innocent look, but has played some dark characters and I would love to see her as Savannah!

Fingers crossed a series adaptation of this one happens soon! Let me know on Instagram who you would love to see in a series for this book @gareindeedreads!