Spooky Season is officially here and what is scarier nowadays than dating—especially online dating? Last Girl Ghosted is just that and so much more. An eerie and devastating story about the dangers of online dating, wrapped up in a thriller by one of my favorite storytellers, Lisa Unger. This story really has it all: a horror movie-esque opening, a complex plot, twists and turns, and characters that you want to root for.

Last Girl Ghosted tells the story of a young woman named Wren who has taken to online dating and meets a handsome and charming man named Adam. After a few months of dating, Wren thinks that Adam is her perfect match. One evening, Wren goes to the restaurant where she is supposed to have a date with Adam at and he never shows up. His profile is gone, his phone number is disconnected, and all traces of Adam have completely disappeared. Thinking she’s just been ghosted, Wren tries to move on but wonders . . . what really happened to Adam and where did he go?

Then, she finds out he cold truth. Adam has done this before to other women and those women have disappeared.

I always love a new Lisa Unger story and for those who are fans of hers, I don’t think she disappoints with this one at all. I loved the way Unger told this story in three parts, with each one feeling like a different sub-genre of crime fiction as you go from mystery to thriller to suspense. This story has so much more between the pages than you would expect with this kind of story. Lisa Unger is a master at peeling back layers and layers to her story and characters before hitting you with a surprising and intricate ending—and Last Girl Ghosted is no exception.

Wren was a really interesting and vivid character, and I thought the supporting cast really stood out. I love when I’m reading a book and I meet a character that is so well written that actors just come screaming out to me. I’d love to see this story as a miniseries so that the creators could really take their time peeling back this story and all that it has to offer. If that were the case, here is who I would love to see on the screen for an adaptation of Last Girl Ghosted! 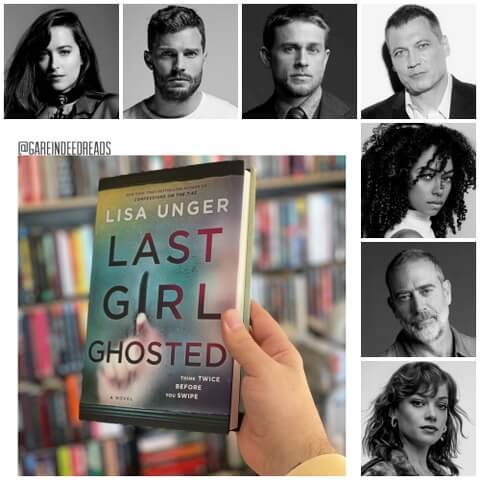 Wren Greenwood – Wren is around 30 with dark hair and bright blue eyes. She is sweet, comedic at times, and perfection as a main character. She is the kind of character you would want to be friends with and you truly get to know more about her as the story goes on. From the minute I met her, I could instantly picture Dakota Johnson as Wren. Dakota has such a great range from romantic comedies to drama to suspense and I would love to see her portray Wren on screen!

Adam Harper – Adam is a charming man closer to 40 who has darker features and is quite the mystery. While Adam isn’t in the story as much as other characters, I really wanted someone who can be both charming, could easily play a villain, but could also make you fall head over heels for him if he were to be innocent. Oddly enough, I thought of Jamie Dornan as someone who could nail all of these aspects of the character and thought it would be interesting to see him rejoin Dakota Johnson on screen in completely different characters than they play in the Fifty Shades series!

Bailey Kirk – Bailey is a tough and attractive private investigator who is trying to help Wren find out what happened to Adam, but has also been hired from the father of one of the other women who disappeared. I wanted someone who you’d want to protect you, someone who is handsome, and someone who was rough around the edges. Charlie Hunnam was my first choice and the only person I could picture as taking on the character of Bailey Kirk!

Jones Cooper – Jones is a character I cannot say much about, only that he is described as tall with a square jaw and is middle aged. I needed someone who could make a character feel protected and someone who I could see as having a personality related to law enforcement. Being a big fan of the show Mindhunter on Netflix, I thought Holt McCallany would be amazing as Jones! He is tall with a square jaw and could easily pull off a no-nonsense character like Jones!

Jax Morris – Jax is a character who is Wren’s best friend and is such a fun and comedic character with heart. Jax was easily my favorite character in this story and I wanted someone that could bring full range to her character. Jax is described as being mixed race with beautiful eyes and black curly hair. There is one part where she was described as being so beautiful, she looked like a drawing and I immediately thought of Logan Browning! I love Logan Browning as an actress and physically, she is just what I imagine for Jax.

Luke – Luke is a character who you saw just as many sides to as you do Wren and while I can’t say much about his involvement in the story, I wanted someone who could literally pull off every single emotion you could think of in a way that doesn’t seem forced. Someone who could show off anger and sadness and yet be comforting is a character Jeffrey Dean Morgan could pull off effortlessly.

Mia Thorpe – Mia is our Drew Barrymore a la Scream of this story. There’s an opening with Mia and you get some interesting information from her perspective that ties in really well with the story when you find out she is one of the women who has gone missing. Even though her character is only in the story for a few pages, she’s mentioned throughout and I wanted someone recognizable that could show up on screen and then disappear but people thought about. I love Jane Levy and I thought she would be an amazing Mia.