Alka Joshi on The Secret Keeper of Jaipur

Alka Joshi on The Secret Keeper of Jaipur

When her debut The Henna Artist was picked as a Reese’s Book Club Pick (“Captivated me from the first chapter to the last page.”—Reese Witherspoon), the pressure was on for author Alka Joshi’s next book in the series. But New York Times best-selling author Joshi’s delivered with her intriguing new novel, The Secret Keeper of Jaipur, in more ways than one.

In The Secret Keeper of Jaipur, henna artist Lakshmi arranges for her protégé, Malik, to intern at the Jaipur Palace in this tale rich in character, atmosphere, and lavish storytelling. It’s the spring of 1969, and Lakshmi, now married to Dr. Jay Kumar, directs the Healing Garden in Shimla. Malik has finished his private school education. At twenty, he has just met a young woman named Nimmi when he leaves to apprentice at the Facilities Office of the Jaipur Royal Palace. Their latest project: a state-of-the-art cinema. Malik soon finds that not much has changed as he navigates the Pink City of his childhood. Power and money still move seamlessly among the wealthy class, and favors flow from Jaipur’s Royal Palace, but only if certain secrets remain buried. When the cinema’s balcony tragically collapses on opening night, blame is placed where it is convenient. But Malik suspects something far darker and sets out to uncover the truth. As a former street child, he always knew to keep his own counsel; it’s a lesson that will serve him as he untangles a web of lies.

We talked with Alka Joshi about writing the book as a reimagining of her mother’s life, what she discovered in her henna research, and what readers can expect from book #3 in the series. 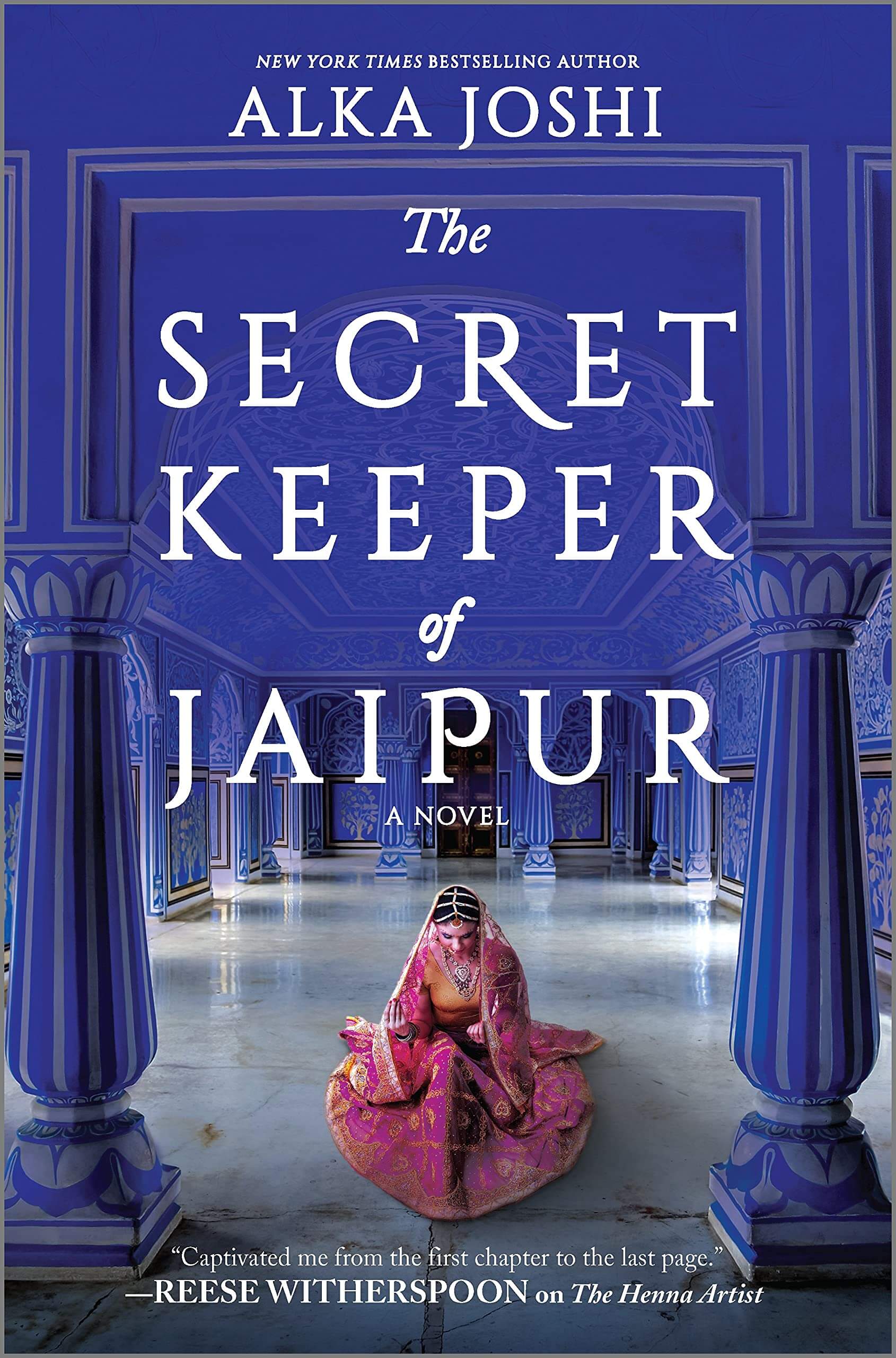 The Henna Artist and The Secret Keeper of Jaipur both have some of the most beautiful covers! What main emotions did you want to evoke with the design?

I wish I could take credit for those gorgeous covers, but it’s the Harlequin Art Department (part of Harper Collins) that designs them so beautifully! The moment I saw their design for The Henna Artist, I knew it was perfect, and it set the tone for the entire trilogy. We’re painting a story for the reader so they know where the story is taking place and who is involved. We want the reader to feel as if something important is about to happen or has just happened. What is it?

You’ve mentioned that Indians’ obsession with jewelry over time has been translated into architectural and clothing design—which was so intriguing to us. It really speaks to the rich details in your writing. What was the most intriguing thing for you while researching for your plots and characters?

I have two things that surprised me.

One: While researching the indigenous people around Shimla who might come to Dr. Kumar’s Community Clinic I became fascinated by the nomadic tribes who migrate with their sheep, goats and buffalo across the steep Himalayan mountain passes every season. They have done this for centuries and still roam the Himalayas today. I knew then that one of my main characters would be a nomadic woman, a young widow who had lost her husband to a treacherous gorge. That’s how Nimmi, Malik’s beloved in The Secret Keeper of Jaipur, was born.

Two: India’s gold obsession is legendary. I remember my mother asking why I preferred silver—considered a “cheap” metal by South Asians—to 22 carat gold, which she’d been gifted abundantly for her wedding dowry, per custom. How surprised I was to learn that while the South Asian hunger for gold is insatiable, little of it is actually mined in India! Only half is imported legally to avoid tariffs. How is the other half smuggled in, I wondered? The answer was in the life of the nomads, articles about smugglers who get caught, and a lot of wild imagination!

You first wrote The Henna Artist as a reimagining of your mother’s life, addressing how her life could have been different if she hadn’t had an arranged marriage at 18. How did you decide to make it into a series?

As I was revising the 30th draft (gulp!) of The Henna Artist, I realized how many stories about Malik and Radha hadn’t made it into the novel. For example, I had eliminated Malik’s backstory: why he lived in the Pink City Bazaar, who took care of him, and why he was finally forced to leave Jaipur. I’d also cut a lot of Radha’s backstory as a Bad Luck Girl out of the first novel. The original epilogue had shown Lakshmi, Malik and Radha 10 years into the future, which also hadn’t made it into the final draft. When The Henna Artist was sent to the printers, Malik’s voice became insistent, wanting me to tell the story of his life as an adult. So I began with the pieces I’d already written and developed the narrative from there. I know these characters so well now that The Secret Keeper of Jaipur just came tumbling out. Once book #2 was off to the printers, I knew I needed a third book to finish Radha’s story as an adult.

What can readers expect from Book #3 in the Jaipur Trilogy?

From the initial epilogue I mentioned above, I knew Radha would marry a Parisian, move to Paris, and have two daughters—Shanti and Asha (I even knew their names!). I also knew something else about Radha she didn’t know: she was as ambitious as Lakshmi. She would go on to get a chemistry degree and work as a lab assistant in a fragrance house. Just as she’s on the cusp of designing a signature scent for her Master Perfumer—who by the way is a woman, rare for 1974 Paris but historically accurate—Radha will be visited by someone she hasn’t seen since the first novel, giving her the shock of her life! Book #3 takes place in Paris, Jaipur and Uttar Pradesh and really delves into the fragrance industry. Did you know many of the base notes in perfumes are manufactured in India?

What can you tell us about the release date of The Henna Artist’s screen adaptation?

You can’t imagine how empowering it feels to dictate what form your story should take as a screen adaptation! I always wanted a character-driven streaming TV series because that’s what I’m attracted to. The amazing development team who won the project—Michael Edelstein, Freida Pinto (set to star as Lakshmi) and Miramax TV—tells me that, crossed fingers and toes, we might start filming in 2022-23.

We heard one of your goals is to do a Ted talk. What issues will you be addressing?

Revisionist history fills our textbooks, tv shows and movies.  I believe historical fiction, especially the type written in the last decade, fills in the missing gaps and even corrects history as we know it and study it today—largely because it’s written by oppressed or dominated or colonized populations. How was the experience from the point of view of those who didn’t win the war? How was the experience for women, who make up only 25% of history makers mentioned in textbooks? When we have a fuller, more accurate account of everyone’s experience, our history/herstory will be far more balanced.