November Guest Editor Allison Winn Scotch is beloved in the contemporary fiction world, and many of the New York Times best-selling author’s books—think Time of My Life and Cleo McDougal Regrets Nothing—pepper many SheReads’ must-read lists. But her debut romance novel The Rewind, described as When Harry Met Sally meets The Hangover, is hitting the #TBR pile of just about everyone we know. Packed full of nineties nostalgia and pop culture references, this charming contemporary romance that takes place on New Years Eve hits all the right notes—just in time for our New Year’s Eve.

Ten years ago, college sweethearts Frankie and Ezra broke up right before graduation. Now, on the eve of Y2K, they’re see each other for the first time since for the wedding of a mutual friend on their former snowy New England campus. The next morning they wake up in bed together, hungover, no memory of the night before—and they’re wearing wedding rings. With no idea how they got there, Frankie and Ezra must trace back their steps and piece together the forgotten night, while the reader discovers the reasons behind the relationship’s messy first ending. But what if they got it wrong the first time?

This second-chance, dual-perspective, scavenger hunt romance is a laugh-out-loud story of first loves and second chances.

Read on for our exclusive interview with Allison Winn Scotch on the importance of 1999 and which one of her titles is hitting the big screen first! 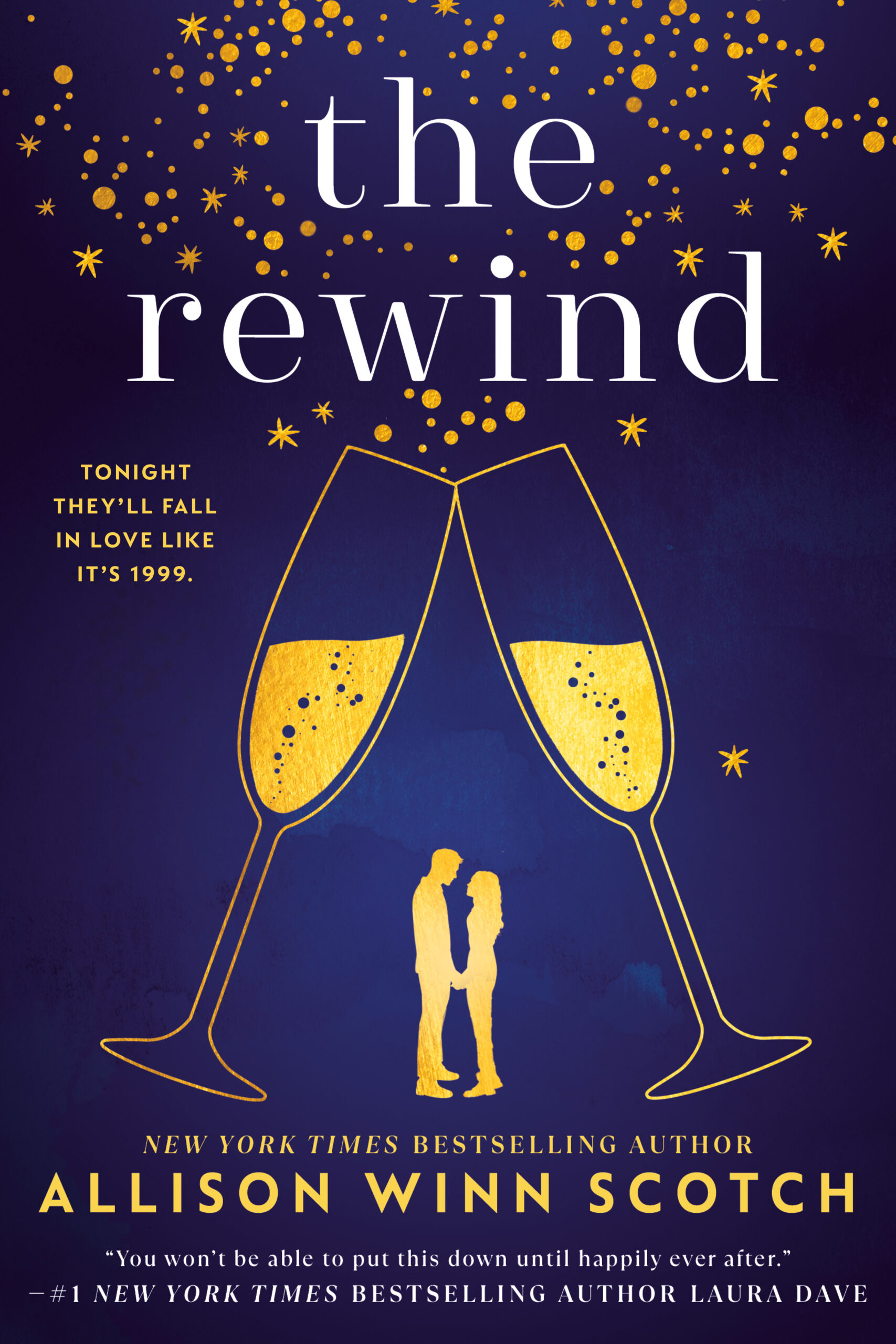 What inspired The Rewind?

I hadn’t written a single word for the first nine months of Covid, and I was starting to feel the itch again. I knew I wanted to write something joyful, and for me, joy is often found in nostalgia – the road not taken is a pretty common theme in a lot of my books. I was honestly just throwing some ideas against the wall on one of those long quarantine walks that we were all taking at the time, chatting with my friend, Laura Dave, on the phone, when I conceived of the early idea – two exes who wake up in bed together a decade later. It’s a new spin on old themes that I like to play around with – love, friendship, regret, reunion, growing-up, getting older.

A couple of reasons. The first being that for practical purposes, it would be awfully hard not to know what sort of trouble they had gotten into the night before if they had iPhones! So I had to get smartphones out of the plot. But from there, I think there is something really special about that time in the ’90s for a lot of us, and probably a reason there’s a resurgence in the ’90s pop culture right now. It was pre-social media, and it was before so many of our current political divisions became so ugly. Whether or not it was a utopian time period in reality, it’s an easy one to look back on and feel that way all the same. Also, New Year’s Eve of 1999 felt really monumental – like anything could happen and any sort of change was possible.

Ah, a great and tough question. As much as I do mire myself in nostalgia, for some reason, I’m not someone who gets bogged down with what-ifs. It’s not that my life is perfect! Rather, it’s hard for me to point to one thing and wonder what I should have changed because, well, I’m here now. I think, if anything, I use those road-not-taken-moments to reconsider my future – ways that I might act differently, opportunities still left to explore. I have teens now, so I’m definitely thinking about my next chapters when they’ll be at college. Right now, I’m dreaming about moving to a farm and opening up a senior dog sanctuary. That’s the sort of what-if that I can really lose myself to. Lol.

What’s something you want the reader to take away from this novel?

You know, I think for a long time, I hoped that readers would maybe take a message or lesson away from one of my books, but I honestly wrote this one simply from a place of sparking joy. (Apologies to Marie Kondo for plagiarizing her phrase.) I’ve been on a reading and TV tear of books and shows that are almost exclusively uplifting, and I think there is real importance in that. We have been through a really difficult period of time, and what I want out of my books and entertainment now is…happiness, contentment, joy. So I hope that Frankie and Ezra delight readers, and I hope they smile and laugh and root for their success.

Which of your characters do you most relate to?

Frankie was definitely more relatable for me, as I tend to write headstrong, stubborn women. Because, well, ahem. But I had to really dial back her bitchiness because that is a very easy crutch for me to lean on. And that said, I probably ended up falling a little bit more in love with Ezra as I wrote and rewrote him. His vulnerability and openness really moved me.

How does the spark of inspiration come to you for your novels? Does it start with a plot, something from your own life, or the idea of a character?

It starts with a mix of all of the above: I often find myself looking around at my friends or my peer group in general and assessing where we are in life and where we want to go. That might spark a theme or a nugget of a plot, and then the next thing that comes is almost inevitably the female lead. I put her into that seed of a plot, and I play around with what could happen to her if she were real, like my friends or my peers. Then, for better or worse, I just start writing. My first few drafts are a complete hot mess.

Which of your books was the most difficult to write so far?

I have two, both of which were tricky because of the time structures. The first is THE REWIND, ha. I was juggling three different time structures in the novel: ten years ago, the night before, and the day of. And it was really difficult to wrestle them all together coherently. The other one is my seventh book, BETWEEN ME AND YOU, which was told from two different perspectives, the man starting in the present when he and his wife have split and telling their story backward chronologically, and the woman starting in the past and telling the story of how they split moving forward chronologically. Sort of like a kaleidoscope. I’m so proud of how that book came out, but I will never ever ever tackle something that complicated again.

Anything, everything! Right now, I’ve been on an exclusively romcom tear because I wanted to get in the mindset for my current revision, and reading banter between other characters really helps juice my brain. But really, any beautifully written book is my jam – if I love the writing, I’m in.

I’m in the middle of revisions of my next romcom, THE RETAKE, about America’s sweetheart’s fall from grace and what happens when she finds an anonymous love letter in her old childhood room. It’s fun.

Lastly – when will one of your adaptations finally hit the screen! Do you know which one we can expect first?

I think the first thing to hit will be an adaptation of BETWEEN ME AND YOU, which I’m writing with a screenwriter friend for an Audible Podcast for Kerry Washington’s production company. We’re almost done all the episodes, so that will be really amazing.