An Exclusive Interview with Jill Santopolo

An Exclusive Interview with Jill Santopolo

Jill Santopolo is undoubtedly one of Reese Witherspoon’s favorite authors and with the success of 2018’s The Light We Lost, Santopolo keeps up her genius writing streak with her February release, More Than Words. Having mastered the modern-day woman’s voice and the art of writing a heartbreaking yet endearing novel, Jill is an author we’ll follow anywhere.

Learn more about Jill Santopolo in this exclusive interview and order your copy of More Than Words now. 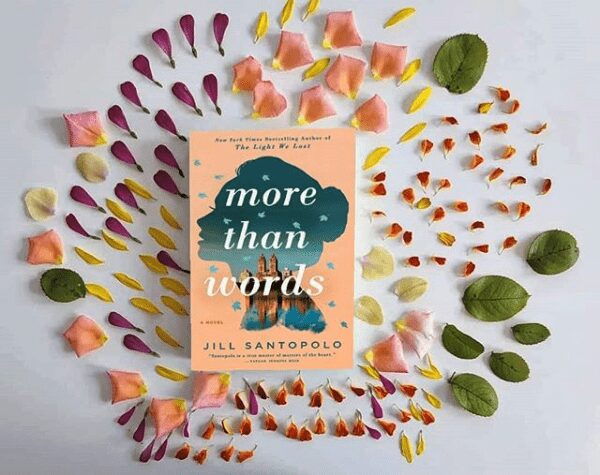 What was the inspiration behind More Than Words?

Like with a lot of my writing, More Than Words came from events that happened in my own life. My father passed away in January of 2015, and after that, I was thinking a lot about what parents leave behind – both for their children and in their children. And I was thinking about the kind of love that exists between a father and a child, and what that love means. Right around then, it also seemed like a lot of people I cared about were fighting cancer, so I was thinking about that too. And I volunteered for Secretary Clinton’s 2016 election campaign, which had me thinking a lot about the reasons people decide to work on political campaigns and run for office. I also was falling in love while I wrote this book, which I think you might be able to tell from the pages. My books tend to be kind of a mixture of what I’m thinking about and what I’m feeling while I write them, along with a good dose of imagination. I called The Light We Lost emotionally autobiographical, though not plot-point autobiographical, and I think this book is similar. Nina’s emotions are similar to mine, but her experiences aren’t.

If you had to choose three to five of your favorite books of all time, what would they be and why?

This is always the hardest question! But there are some books I’ve loved forever, so here they are:

A Tree Grows in Brooklyn by Betty Smith. Even though this is a book written for adults, I read it for the first time when I was I think 10 or 11 years old, and then I read it again every summer until I graduated from college. It seemed to me that it was the story of a girl and a woman who used her brain to make her life into what she wanted it to be, regardless of circumstances, and that really struck a chord.

Queen of the Summer Stars by Persia Woolley. This was the very first book I read that had any sort of real romance in it – it’s the story of Arthur and Guinevere and Lancelot from Guinevere’s perspective, and I read it over and over when I was a teenager. I think something about the love triangle there had a real influence on my writing.

Jacob Have I Loved by Katherine Paterson. This is another book that I read multiple times. Even though it’s a book that’s written for a teen audience, it’s one that delves into relationships between sisters and friends and families and shows how it’s belief in oneself and one’s ability that leads to happiness. I think I found something reassuring in that when I was younger, and still find it comforting today.

What is currently on your #TBR pile?

I’m so, so excited because the folks at Putnam just sent me an early bound manuscript of Bianca Marais’s new book If You want to Make God Laugh. (One of the perks of being an author!) I loved her first book, Hum If You Don’t Know the Words, so can’t wait to dive into this one.

I also have Behold the Dreamers by Imbolo Mbue, The Gunners by Rebecca Kauffman, and Still Me by Jojo Moyes on my bedside table, waiting for me. And a big pile of advance reader’s editions and bound manuscripts that publishers have sent over for me to blurb. I hadn’t realized that was something that would happen after I had a book published, and it’s so much fun to get to read wonderful new books early – though the number of them can be a bit daunting! I try to read as many as I can in as timely a manner as I can, and I do end up feeling a bit guilty that I can’t get to them all.

Oh man, you and the tough questions!

The authors I admire most are the ones who are able to reach readers who aren’t always readers and bring them into the world of books, and the ones who create communities around their stories, and who use their platforms as authors to try to make a difference in the world. So for those reasons, three of the authors I admire most are J.K. Rowling, John Green and Nora Roberts.

What’s one writing essential you can’t live without?

Is it cheating if I say my agent, Miriam Altshuler?