I had to admit to myself around ten years ago that I have a bad memory. Sometimes when you start a new story, you can be introduced to so many characters at once that it becomes overwhelming. Cue the ray of light on the Notes app on my iPhone: and that’s how I became known as the “bookish casting director” on Bookstagram. Because I have grown up to be a movie and television buff, I wouldn’t take notes on the characters so much on the app as I would think of the novel itself as a movie. I’ve always visualized books as being on the screen in some way when I read a book, so this just made sense to me. I wouldn’t be introduced to a character and write down “tall, blonde, pretty”—I would write down “Blake Lively” and that is how I would keep track of characters in books for years and years, way before I even became a Bookstagrammer.

When I first started my blog, I joined this 30-day book-related challenge on Instagram. One was specifically about a character that you loved or remember most, and I really wanted my answer to stand out.  So I included collages for every day of that challenge with a small cast, whether one character or several. I never won the challenge—but people loved to engage on these posts and started DMing me, asking for a cast for certain books. As part of this Bookish Entertainment column, here’s a look at the process I use in casting a book—and my first choice is The Last Thing He Told Me by Laura Dave. This has been picked up by Apple for a limited series and Julia Roberts is set to star!

I owe the way I build my book’s ensemble cast to Lisa Beach; if you don’t know Lisa Beach, she is responsible for casting the Scream franchise, and I just loved the way she had these big stars playing both small and large roles in all of the movies. So, I keep notes on each character we meet in a book, and some of the things I take note of are race, age, descriptions, etc. I like to try to stay as closely to the authors creations as possible while also exercising my own creativity.

The Last Thing He Told Me by Laura Dave is a story about a woman who is a woodworker, a wife and a stepmother. One day her husband disappears and all that is left for a clue as to his whereabouts is a note saying “Protect her.” regarding his daughter. This one was such an immersive read that kept me guessing the entire time and I loved all the reveals sprinkled throughout the story; I can definitely see why this one is going to be a movie! When reading this one, I decided to cast eight characters, so here is who I chose for each one and why (spoiler-free). 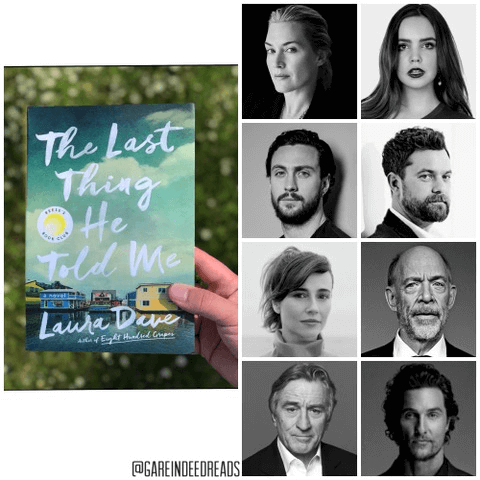 Hannah Hall – Hannah is a woodworker in her early 40s and tall. Julia Roberts will be perfect for this role but, if she wasn’t cast I think Kate Winslet would be excellent. She has that ability to be a tough character who can also be vulnerable, and someone that the audience would really root for.

Owen Michaels – Owen is described as a surfer-looking guy who looks just as good in a suit, and through flashbacks is shown in an array of emotions. For this character, I’d love to see Matthew McConaughey! He’s got the look and his catalog of roles proves that he has the range to play a character like this who is at the heart of the mystery.<

Bailey Michaels – Bailey is a teenage girl full of angst who doesn’t have the best relationship with Hannah. She has purple hair and a typical teenage attitude, but loves her father unconditionally and is really upset by his disappearance. With this role, I needed someone young, but that had the ability to really take this characters journey to a whole other level. I chose Bailee Madison because America has seen her grow up in these child roles and now she’s branching out in different genres. I think she is someone who could nail a role like this.

Grady Bradford – Grady is a US Marshal who is described as alarmingly good-looking and in his early 30s. This is one of those situations where an actor just pops into my head and I didn’t really have to think of it. Once I read that description, I immediately thought of Aaron Taylor-Johnson, because he is in his early 30s and alarmingly good looking but, his previous roles have shown he can be the good guy, the bad guy, and everything in between.

Jules – Jules is Hannah’s best friend; a reporter and kind of the ultimate best friend you’d want by your side, especially in a situation like this. She is quirky, supportive and smart. I immediately thought of Linda Cardellini because I love her in Dead to Me, and I think she’s severely talented and underrated. Anyone who can go from Velma in Scooby Doo to a challenging role like hers in Dead to Me can pull off anything she is given.

Charlie Smith – Charlie is good-looking, in his late 30s, with a dimple when he smiles. Immediately when I thought of a smile that could melt your heart, I thought of Joshua Jackson. I’ll keep this spoiler-free, but this character would be someone who can really show a range of emotions and be a bit mysterious, and Jackson could definitely make this character his own.

Tobias Cookman – Tobias is a college professor who is intelligent, tough and not the kind of guy you mess with; yet he shows a bit of heart and compassion in the small time he is on the page. This role should have a memorable actor, because this character might not be in the book as much as the others, but his role plays a big part. I would pick a well-known actor like J.K. Simmons who is recognizable and has played the role of someone who is tough but can show off a more sensitive side.

Nicholas Bell – Nicholas Bell is a complicated and mysterious man who is described as looking like your average grandfather. As I got to know this character and peeled the many layers back of who he is and what role he plays in this mystery, I immediately thought of Robert De Niro; he would be perfect.

So there you have it! And if you’re ever looking for a Hollywood cast for your favorite story, you may just find one on my page @gareindeedreads!