There are very few queer Black novelists writing their own stories, and very few Black male novelists writing contemporary stories. Things We Couldn’t Say (Sept 2021) is a novel about a bisexual Black boy finding first love, and facing the return of the mother who abandoned his preacher family when he was nine. In honor of Pride Month (and our excitement on this title filling a huge gap in YA literature), we’re proud to feature Jay Coles as the June Guest Editor.

Coles is an acclaimed voice in YA fiction: 2018’s Black Lives Matter-inspired stand-alone, Tyler Johnson Was Here, received starred reviews from Booklist and School Library Journal, and was an Entertainment Weekly Most Anticipated Book of the Year.

Now, in Things We Couldn’t Say, Coles shows us Gio, a guy trying to navigate love in all its ambiguity—whether it’s family love, friend love or romantic love—hoping at the other end he’ll be able to figure out who is and who he should be. Gio has always felt a hole in his life. Not because he’s into both guys and girls or because his father has some drinking issues. The hole takes the shape of his birth mom, who left Gio, his brother, and his father when Gio was nine years old. For eight years, he never heard a word from her . . . and now, just as he’s started to get his life together, she’s back. Can he forgive her like she wants to be forgiven? Complicating things further, Gio’s started to hang out with David, a new guy on the basketball team. Are they friends? More than friends? At first, Gio’s not sure . . . especially because he’s not sure what he wants from anyone right now.

Things We Couldn’t Say tackles how Gio discovers how to love himself for who he really is—every part of himself, not just the parts he thinks the world will accept. And above all else, Gio learns how to fight for what he wants when the world, or life circumstances, try to crush his happiness. 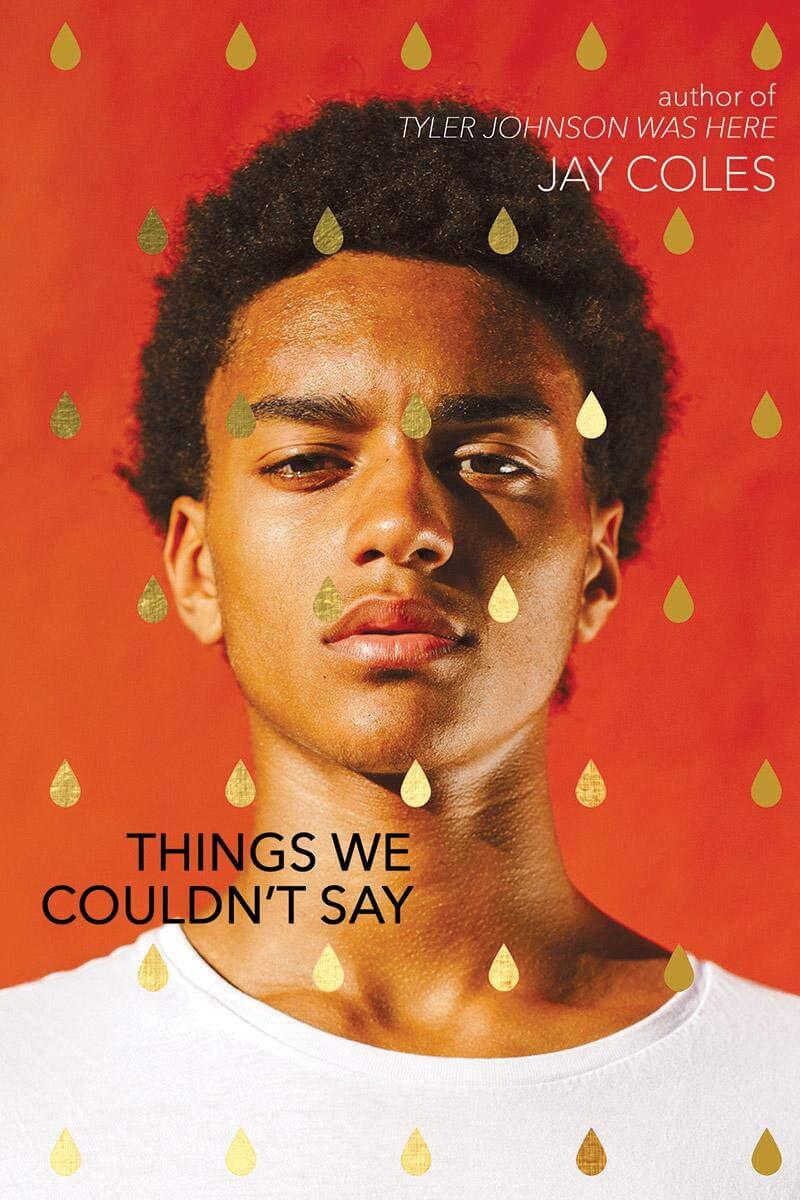 We talked with Jay Coles about the intersection between Blackness and queerness, and the hardest part of writing Things We Couldn’t Say. Want more Jay Coles? Don’t forget to check out our Ten Book Challenge: Jay Coles’ Book-It List for the 10 books that have influenced him the most.

What led you to write Things We Couldn’t Say?

I had always wanted to write about a Black boy who finds love in various forms. Specifically, I wanted to explore the intersection of Blackness and queerness because I didn’t see many books that talked about this, but especially not from an affirming place. It felt very natural to write.

The hardest part about writing this book was battling self-doubt and impostor syndrome along the way. There were so many times where I felt like quitting because I felt discouraged that this book would ever be published or if people would actually find it interesting. It took years for me to get over that. And to be honest, those thoughts still creep on me. It’s an every day sort of fight.

Can you share a few books that inspired you while writing Things We Couldn’t Say?

Giovanni’s Room by James Baldwin, More Happy Than Not by Adam Silvera, Monster by Walter Dean Meyers, and American Street by Ibi Zoboi.

For people who hold multiple marginalized identities, it can sometimes feel exhausting to explore the layers of being Black and LGBTQ. This was especially true this past year. How did you navigate those feelings while writing the book—especially centering it toward a YA audience?

I don’t know if I feel equipped to speak generally about those specific things, but from my own personal experiences, this past year has just been exhausting with personal issues on top of the brutalization of Black bodies by police officers. It was super tough to write, but I knew that my writing could be a way of activism and affirmation for young Black readers, so that gave me the power to keep going.

Religion is highly embedded within the Black community, and readers learn that Gio grew up in a preacher’s home. How does religion influence this book?

I’m a practicing Christian. Even though I might not appear as your usual Christian, I love Jesus and what He stood for. I grew up in a preacher’s home. My grandmother was a pastor. Her mother was a pastor. And on and on. Black women in my life introduced me to religion—a religion of hope, a hope that helped us make it through. I wanted that to be a part of this book because I knew that there was going to be some interesting dynamics between Gio’s faith journey and his sexuality journey and I wanted to explore the nuances and complications with those things, but how those two things don’t necessarily have to be against each other in the end.

Did you see yourself in the main character while writing this book?

Yes and no. I’ve been trying to distance myself from my main characters more and more over the years, but certainly a lot of Gio is a lot of me. We both enjoy Paramore. We have solid support systems and friends and found family. But his life is very different than mine in many other ways. Still, I empathize with him and his story deeply.

How does the main character deal with hyper-masculinity while coming to terms with his sexuality?

Hmm… I’ve never really been asked this question and I’ve never had to think about it, but it’s a good one. I think Gio certainly has to recognize that being queer doesn’t make him less of a man—even when people around him might say otherwise. But I think specifically as it relates to hyper-masculinity, Gio battles that by just being unapologetically himself. He doesn’t let people put him into boxes and he doesn’t put himself in them, either.

Identifying as a bisexual Black man could be met with misconceptions and hostility. How did the main character, as well as you, come to terms with sharing his truth? Were they one and the same, in a way?

Yes, of course being a bi Black man could be met with misconceptions and hostility. I wanted to explore that in this book with Gio’s relationship with his father. I’m going to try not to give anything away–but this may be spoilery!?!?!?! Anyway…We see his dad fight against Gio’s sexuality with extreme resistance at first. Gio’s father has a lot of misconceptions about Gio’s sexuality (what that means for him and the family and the community that they live in. It comes from a place of his dad being misinformed and being raised in an mega-conservative and toxic family. Because of this, Gio’s dad reacts from a place of hostility and anger that Gio obviously has to feel the weight of. But I wanted to show people in Gio’s family and community (especially his dad) learn more and more about what it looks like to accept who Gio truly is and not who they want him to be.

Why are Black Queer books important to you?

Some Black kids are queer. That’s just a fact. They deserve to be able to go into a library or bookstore and pick up a book in the middle grade or young adult section that is written for them, that celebrates every layer of them, that shows them that they deserve love and to be loved, to know and to be known by people who aren’t queer, etc. etc. I hope that one of them would pick up Things We Couldn’t Say and feel a long, warm hug from me, reminding them that it’s okay to be who they are. They were made that way for a reason and that reason wasn’t to hide or to slip into the shadows to be forgotten. It’s to be celebrated and to be affirmed.

Want more Jay Coles? Don’t forget to check out our Ten Book Challenge: Jay Coles’ Book-It List for the 10 books that have influenced him the most.