Marie Benedict and Victoria Christopher Murray on The Personal Librarian

Marie Benedict and Victoria Christopher Murray on The Personal Librarian

The Personal Librarian by co-author team Marie Benedict and Victoria Christopher Murray is not your everyday historical fiction novel. It gives a woman the place in history she deserves, spotlighting her luminous career and highlighting her immense achievements, while also sharing her secret and personal inner world in a setting that would have been hostile towards her if her identity was revealed.

And the woman in question is Belle de Costa Greene. The true story behind The Personal Librarian: Hired by J.P. Morgan in 1905 to serve as his personal librarian, Belle was the creator of the Morgan Library’s famous manuscript collection, and she became one of the most powerful people in the art world, and one of history’s most prominent librarians.

But Belle was hiding a secret: she was shielding her Black identity and “passing” for white.

In its glowing starred review, Booklist said, “Every element of this blockbuster historical novel is compelling and revelatory, beginning with the bedazzling protagonist based with awestruck care on Belle da Costa Greene. . . Benedict and Murray do splendidly right by Belle in this captivating and profoundly enlightening portrayal.” Even while writing this novel, Benedict and Murray found themselves profoundly changed by Belle’s story. As they researched, edited, and discussed the issues of Belle’s time, they forged a friendship both women describe as transformative.

We talked with Benedict and Murray about the co-writing process, the surprising discoveries behind their research, and the five words they’d use to describe The Personal Librarian. 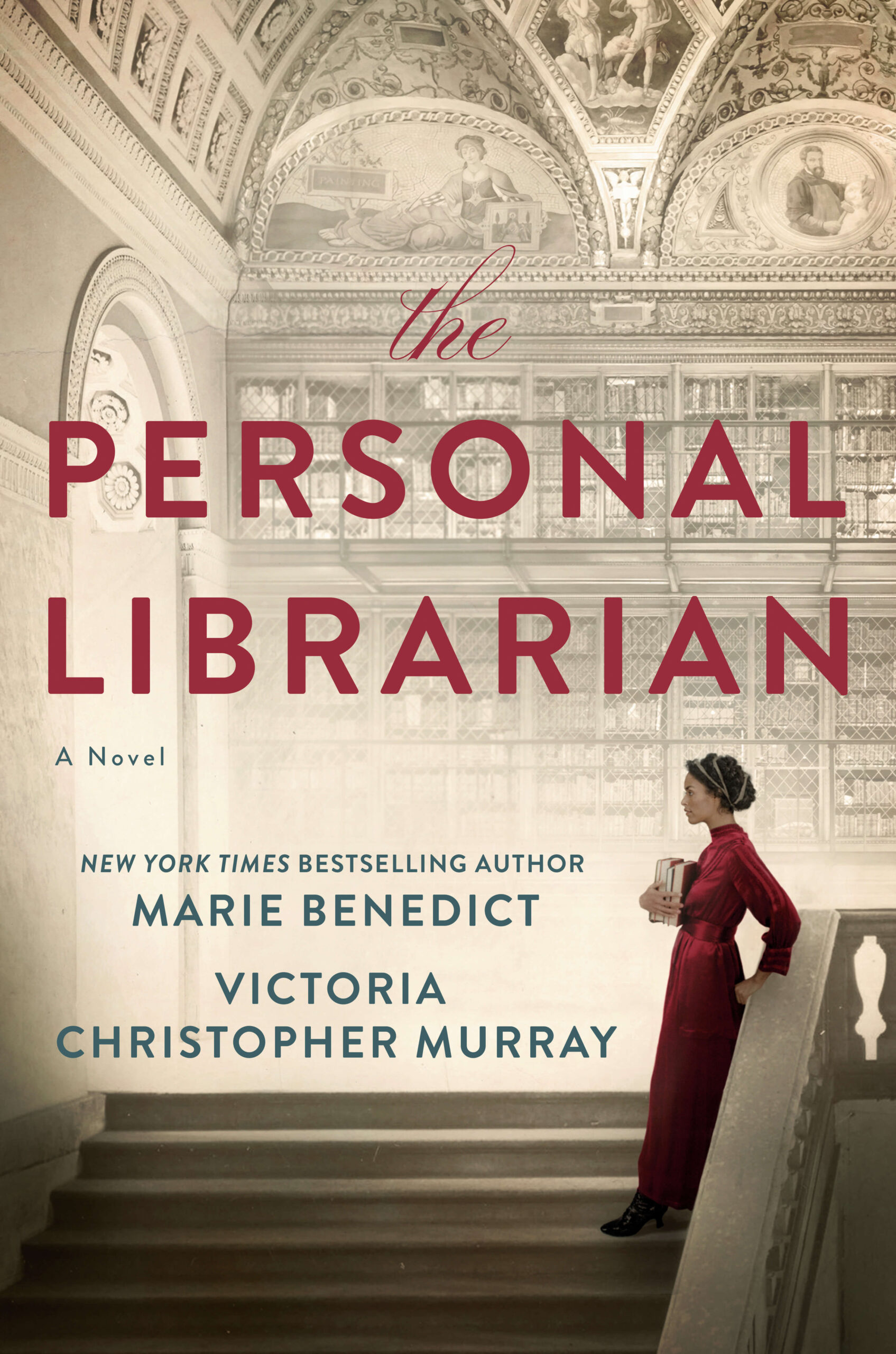 How did this partnership come about  to write The Personal Librarian?

Marie Benedict: The story of Belle da Costas Greene — the tale of the wildly successful personal librarian to J.P. Morgan who could only thrive by passing as white — haunted me for years, as did the context of her life and time. But I knew I couldn’t write this story by myself; I didn’t feel comfortable or right about trying to envision what it would be like to be an African-American woman in the years after the Civil War. I needed and wanted a partner, so I put the project on hold until I found the perfect one. Finally, I was fortunate enough to discover Stand Your Ground by Victoria Christopher Murray, and I hoped that I’d found my partner, as I read this important, award-winning novel about a white police officer shooting a black teenage boy told from two perspectives, the boy’s mother and the wife of the policeman. Thankfully, Victoria agreed!

Victoria Christopher Murray: The idea for The Personal Librarian was Marie’s. Belle had been a character she’d wanted to write about for a few years and she felt that she could only do Belle justice by having a co-author. Marie read one of my novels, then reached out to my agent through hers. It took me a while to get on board — that’s another story — but once Marie and I spoke on the phone, it was a done deal…and I’m so happy about that.

What made you focus on Belle’s story in particular?

MB:  I first came across Belle years ago when I was a frustrated New York City lawyer and I would escape to the Morgan Library, almost as a refuge and a way of imagining another life. When I dug into the research about her, I learned not only that she’d become a powerful part of the art world during her lifetime, but that her father Richard Greener, the first African-American graduate of Harvard, had been an important advocate for and writer on equality in the decades after the Civil War. After I realized that Belle had to suppress her true identity and live as white because much of the legislation that had been enacted during that time period had been overturned (undercutting much of Belle’s father’s work), I felt compelled to tell her story.

What are three things that surprised you while researching this novel?

VCM: The entire researching part was new to me since I’d never written historical fiction before, so just about everything surprised me (in a good way). I was surprised how sometimes I could research for hours, read a dozen articles to discover one juicy fact. (Example: It took me five hours once to discover that there were some who speculated that Belle was from Cuba.) I was also surprised that there was little information out there about Belle da Costa Greene, which was shocking because of her impact on the Morgan Library and being the daughter of Richard T. Greener.

MB: More than anything, I think I was surprised by how possible equality had been in the years  after the Civil War (as embodied in the Civil Rights Act of 1875, along with other legislation) and how quickly that equality was eviscerated afterwards when people became fearful. Our country had a chance to get it right in the years after the Civil War, and I cannot help but speculate as to where we’d be today if those efforts toward equality hadn’t been reversed. Belle’s boldness often astonished me, our version of her anyway. She lived her life out loud, and Victoria and I cane to believe that she used her audaciousness as a way of hiding in plain sight. It also certainly made her quite the celebrity in her day. And, the extent of Belle’s sacrifices took my breath away and often left me reeling on her behalf.

To you, what are the ethics of writing about historical figures?

MB: This is such an important issue and one I always consider when relying upon real historical figures as inspiration for the characters I create, one Victoria and I certainly talked over and over. Even though I/we write fiction and therefore the characters are my/our creation, I/we always try to respect and honor the historical women who inspire the stories. After all, it was their legacies and their crucial contributions to our society — often overlooked or suppressed — that prompted me/us to write the novels along with the desire to have those legacies known and celebrated by a wider audience.

VCM: Again, this is a new genre for me, but I would say it’s important to research as much as you can about the character so the fictional parts of the story are as close to the historical figure as can be. Even though it’s fiction, I wouldn’t want to write anything that would be outside of the person’s character, values or their morals as I’d come to understand the person.

Both of your books span different time periods and genres. What time period has been your favorite to write about, and why?

VCM: This is the first time that I’ve ever written outside of the current decade, so I’m very comfortable writing contemporary stories. However, I’m intrigued by going back in history now, and I can see myself writing books set in the 20th century. I don’t think I’d go back too much further than that.

MB: I guess I’m a little different than some other writers of historical fiction in that I don’t start with a fascination with a particular time period. Instead, I uncover an important and compelling historical woman and I follow her into whatever time period she leads me. Fortunately, I find all past eras intriguing, so I am delighted to be transported into different parts of history.

You both found yourselves changed by Belle’s story. What do you feel was so transformative about the process?

MB: Victoria and I were knee-deep in edits on The Personal Librarian —zooming for hours most days during the early days of the pandemic — when the events giving rise to the Black Live Matters Movement happened and the protests began. While we were writing about Belle and the segregated and racist time in which she lived — researching lynching at one point — we were watching modern-day racism unfold before our very eyes and processing it together, incredulous at the parallels. As we did so, Victoria shared with me her own experiences with racism, and I began to get just a glimpse of life through her eyes — and it changed me. For me, our friendship and our conversations are the most important thing that happened as a result of The Personal Librarian.

VCM: What changed me the most was writing with someone of a different race and having to share intimate thoughts. I had to share with Marie what it was like to be a Black woman in America. Of course, I’d had these conversations with my peers, but race discussions with someone who wasn’t Black were never too deep. However, for Marie and me to honestly and authentically write about Belle, I had to share my own experiences with racism and my own thoughts and beliefs about this country. That is something that as Black people we learn to be careful with, especially in a professional environment. But Marie gave me space…we gave each other a soft place to land.

If you could only describe The Personal Librarian in five words, what would they be?

VCM: A bold and brilliant Black woman. (Sorry about the extra word.)

Want more? In our Ten Book Challenge: Book-It List feature, see the books that changed the lives of both Marie Benedict and Victoria Christopher Murray.