Although I’m a crime fiction and thriller junkie, the past year I’ve been stepping out of my comfort zone and dipping my toes into other genres from the likes of Christina Lauren to Taylor Jenkins Reid and now, finally Emily Henry. I’ve heard so much praise for Henry’s book Beach Read so, when People We Meet on Vacation came out and I read the synopsis, I thought it sounded cute, fun, and just what I needed as a palate cleanser between some of the darker reads you can find in the crime fiction genre. It’s time to grab your SPF, your sunglasses, and grab a copy of People We Meet on Vacation—the perfect beach read!

People We Meet on Vacation is about two best friends: Poppy, the wild child and Alex, the voice of reason. After meeting in college and starting an unexpected friendship, Poppy and Alex begin a tradition of an annual summer trip for nearly a decade. After one trip two years ago ruins the friendship, Poppy finds herself in a place where she’s unhappy and reaches out to Alex to convince him to take one more vacation with her to see if they can mend their broken friendship, and he agrees. Told in alternating chapters between previous vacations between the two friends and present summer, this is a laugh-out-loud romantic comedy that is perfect for the screen! Here are my dream choices for the characters I met (on vacation). 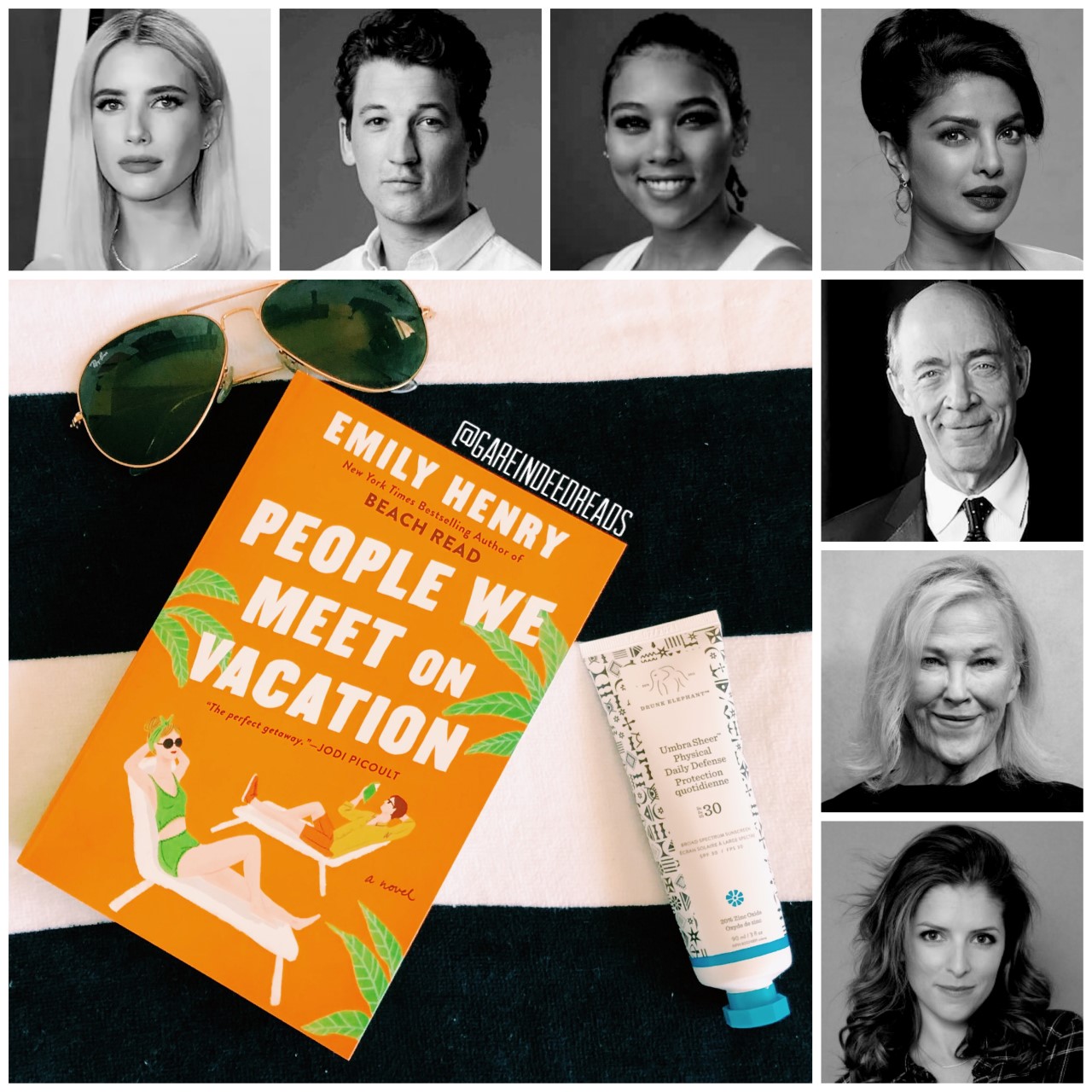 Poppy Wright – Poppy is a 30 year-old blonde blogger who is wild, funny and over-the-top. Because Poppy is at times dramatic and yet, character who made me laugh the most, I immediately thought of Emma Roberts! While Roberts has perfected her villainous roles in American Horror Story, I thought she was hilarious in Scream Queens and the romantic comedy Holidate so, she was my first (and only) choice to play Poppy!

Alex Nilsen – Alex is a tall and handsome man who is a bit uptight with a dry sense of humor, and at times can be a bit nerdy. For this role, it took me a while—and then the lightbulb went off. Miles Teller is handsome, he could definitely play a role that requires a bit of geek, and he’s been in a few romantic comedies himself so, I definitely think he could make the audience fall head-over-heels for him.

Rachel Krohn – Rachel is Poppy’s best friend, at times voice of reason, and right from the first page that she came into the story, I loved her. I think for Rachel I would want someone who is recognizable, funny and can be a bit dramatic herself. Between her work in Love, Simon and Tragedy Girls, I thought Alexandra Shipp would be perfect for all of the hats that Rachel plays in this story.

Swapna Bakshi-Highsmith – Swapna is Poppy’s boss and she is stylish, kind and a role model for Poppy. I was wondering what actress meets that criteria? Priyanka Chopra. This was the first character I casted when I was reading this and it was a no-brainer. I thought Priyanka was great in the romantic comedy Isn’t It Romantic and would love to see her alongside Emma Roberts!

Mr. Wright – Poppy’s father is a typical fatherly figure in a story like this. He is loving and caring to Poppy but, when the friendship develops between Poppy and Alex, Mr. Wright is very stern and tries to intimidate Alex before they go on any of their trips. Think of the father who yells “…and no funny business” before his daughter leaves with a man. I think J.K. Simmons would be great as Poppy’s father. He was great as Peter Parker’s boss in Spider-Man and could also nail the funnier moments.

Mrs. Wright – Poppy’s mother is a great supporting character who had me laughing so hard I was crying during one scene. I thought of the last time I laughed that hard and sure enough, it was during Schitt’s Creek. While Poppy’s mother is nothing like Moira Rose, Catherine O’Hara is someone who can play any character she’s given and would be exceptional as Mrs. Right.

Sarah – Sarah is Alex’s ex-girlfriend who is a teacher and more demure than Poppy. Although she is someone who is discussed a lot but not necessarily in the book often, her character has an important role. In movies, I love seeing cameos during that important scene by a well-known actor/actress. I think having Anna Kendrick pop up for the Sarah’s scene would be great!

And that is my dream-cast for People We Meet on Vacation! Feel free to join me on Instagram at @gareindeedreads to see if any of your favorite reads have gotten my imaginary Hollywood treatment!