This Thursday, April 22nd at 4 PM PT/7PM ET, Netflix will be hosting a virtual Sneak Peek Premiere Event for Shadow and Bone, based on the New York Times bestselling Grishaverse novels by Leigh Bardugo.

Tune in to be the first person to see a TEN MINUTE sneak peek of Shadow and Bone along with other fun moments with the cast including behind-the-scenes clips, a Q&A, and more. The event will stream on Netflix YouTube, with simulcasts to Netflix TikTok, and the Netflix Geeked Facebook and Twitter pages. 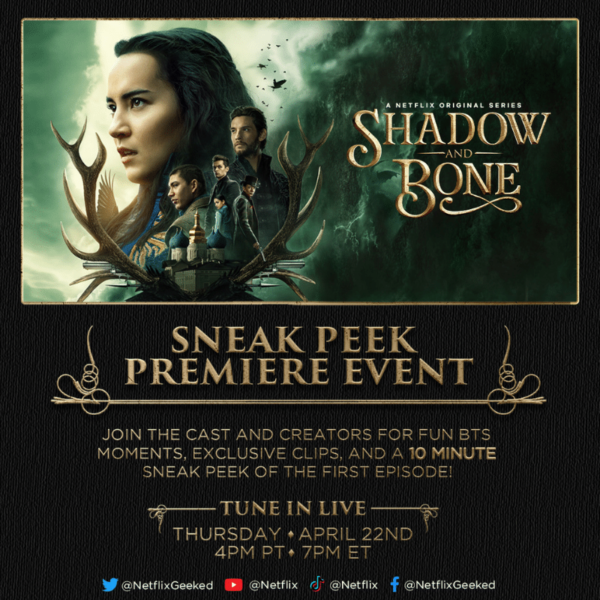 Based on Leigh Bardugo’s worldwide bestselling Grishaverse novels, Shadow and Bone finds us in a war-torn world where lowly soldier and orphan Alina Starkov has just unleashed an extraordinary power that could be the key to setting her country free. With the monstrous threat of the Shadow Fold looming, Alina is torn from everything she knows to train as part of an elite army of magical soldiers known as Grisha. But as she struggles to hone her power, she finds that allies and enemies can be one and the same and that nothing in this lavish world is what it seems. There are dangerous forces at play, including a crew of charismatic criminals, and it will take more than magic to survive.

Shadow and Bone releases globally on Friday, April 23rd only on Netflix.

Be sure to tune-in and share your excitement on social media using #ShadowAndBone and tag @SheReadsDotCom!